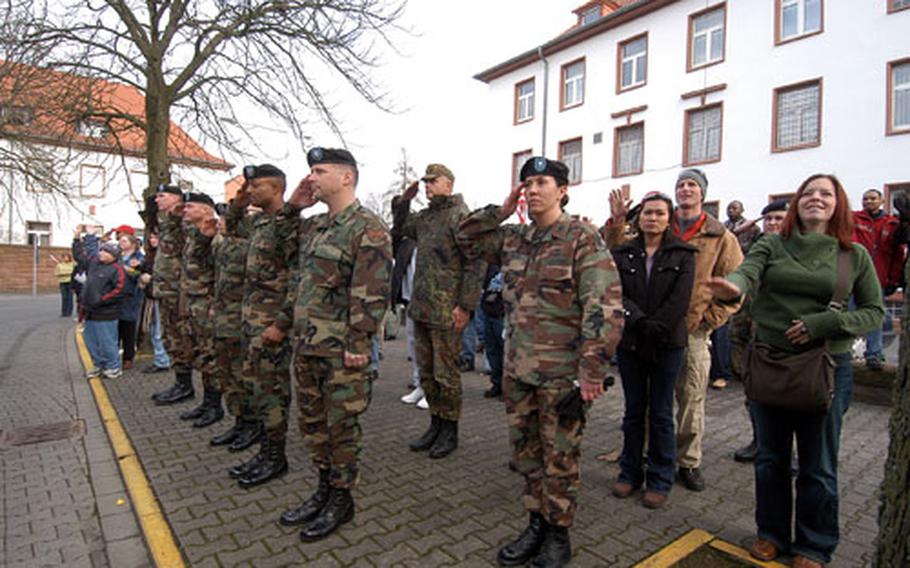 As many as 31 U.S. Army facilities in Germany will close within the next two years, affecting roughly 2,400 U.S. soldiers, 800 U.S. civilians and 700 locally hired employees, the Department of Defense announced Wednesday.

Because of troop reductions at the posts and the relocation of Army units to other bases in Europe and the U.S., the DOD determined the facilities were &ldquo;excess to its needs,&rdquo; according to a DOD news release.

After the roughly 620 soldiers of the 1st Squadron, 1st Cavalry Regiment are reassigned throughout the Army, all U.S. Army Europe facilities in B&uuml;dingen and Gelnhausen will be turned back over to the German government, according to the DOD statement. That handover, which includes six facilities, will be completed in fiscal 2008.

By the end of March 2009, all U.S. Army facilities in Hanau will be turned over to the Germans as well.

The announcement also put nearly all Army bases in the Darmstadt community on the chopping block. Almost all of Darmstadt&rsquo;s Army units have inactivated, with the exception of its intelligence units.

USAREUR officials are sure that 11 Darmstadt facilities slated to close will also be off the Army&rsquo;s books no later than the end of March 2009, but a pair of facilities in Darmstadt might remain open longer, according to a U.S. Army Europe press release.

Units that work at the Darmstadt Training Center &mdash; known locally as the Dagger Complex &mdash; and the Nathan Hale Quartermaster Area haven&rsquo;t yet moved and aren&rsquo;t slated to inactivate.

The Defense Threat Reduction Agency, based at Nathan Hale, will move, but where it will go hasn&rsquo;t been determined.

The Dagger Complex, a U.S. military intelligence site, will remain open as a work site only until a replacement facility is built in Wiesbaden, according to the release. The Army previously announced the soldiers of the 66th Military Intelligence Group, which mans the site, would be housed in Wiesbaden and transported to the Dagger.

Turley Barracks, a small post in Mannheim, will also be turned over to the German government before the end of September. No U.S. personnel remain at Turley, according to USAREUR.

Altogether, the facilities cost roughly $176 million to operate annually, according to DOD.

Department of Defense officials on Wednesday announced a timeline for the closure of several bases and facilities at communities in Germany:

** Two other Darmstadt sites &mdash; the Darmstadt Training Center and the Nathan Hale Quartermaster Area &mdash; will eventually close, but at a date to be determined.