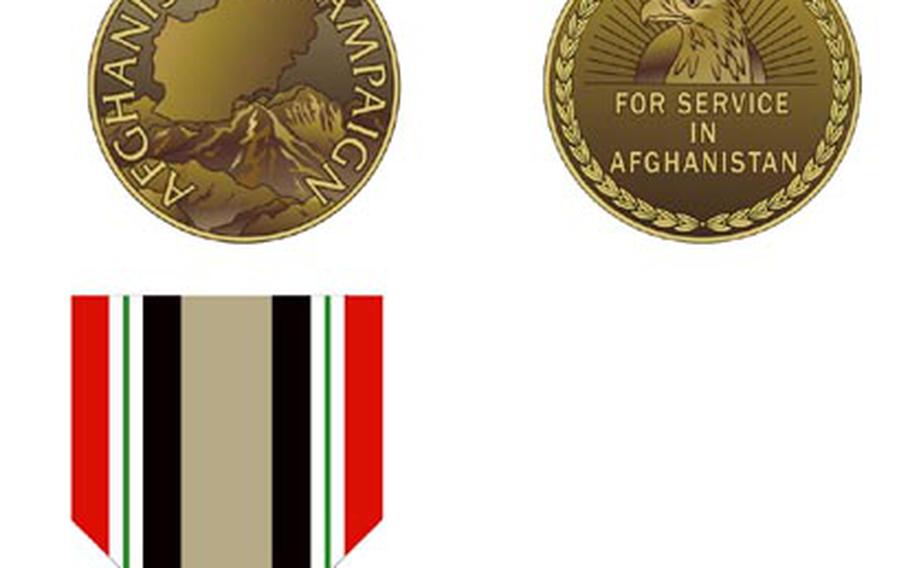 The Afghanistan (top) and Iraq Campaign Medals. ( to view larger version of photo) ()

ARLINGTON, Va. &#8212; Not quite one year after Congress authorized two new campaign medals to honor servicemembers who have deployed to Iraq and Afghanistan, the Pentagon has come out with the rules governing their award.

The Afghanistan and Iraq Campaign Medals were created by Congress last May, after lawmakers and troops objected to President Bush&#8217;s 2003 decision to break with tradition and issue universal &#8220;Global War on Terrorism&#8221; medals, instead of awards centered around specific military operations.

According to criteria issued Thursday, in order to earn the Afghanistan Campaign Medal, servicemembers must have served in direct support of Operation Enduring Freedom on or after Oct. 24, 2001, &#8220;to a future date to be determined by the Secretary of Defense or the cessation of the operation.&#8221;

The area of eligibility &#8220;encompasses all land areas of the country of Afghanistan and all air spaces above the land,&#8221; the criteria said.

To earn the Iraq Campaign Medal, servicemembers must have served in direct support of Operation Iraqi Freedom on or after March 19, 2003, with an end date to again be determined by Pentagon&#8217;s top civilian.

Kuwait is not included in the Iraq Campaign Medal&#8217;s area of eligibility, according to a Pentagon spokeswoman, Air Force Lt. Col. Ellen Krenke.

For either medal, servicemembers must have been assigned, attached or mobilized to units operating in these areas of eligibility for 30 consecutive days or for 60 nonconsecutive days.

Aircrew members on regular assignment flying sorties into, out of, within or over one of the areas of eligibility, receive one day of credit for each day of operations.

There are two circumstances where members can earn a campaign medal without spending the required amount of time in theater: involvement in combat; or being wounded badly enough to require evacuation from the area of eligibility.

Both medals may also be awarded posthumously.

But no matter how many times a servicemember is deployed to the same region, they are authorized only one Afghanistan Campaign Medal or Iraq Campaign Medal &#8212; and there are no service stars allowed on either ribbon to mark additional rotations.

Moreover, servicemembers can qualify for both the Iraq and Afghanistan awards, but they must earn them on separate deployments: the same qualifying period of service can&#8217;t be used to justify eligibility for both medals.

There is also a kicker involving the Global War on Terrorism Expeditionary Medal, or GWOTEM.

Such members can also apply to be awarded one of the new campaign medals.

But servicemembers must choose one or the other &#8212; no one is allowed to wear both the GWOTE and the Iraq or Afghanistan Campaign Medal &#8220;for the same act, achievement, or period of service,&#8221; according to the criteria.

To apply for the medals, servicemembers must show a copy of their orders to their military personnel office or flight, which will determine their eligibility.

Medals were to be available for purchase at military clothing sales outlets Friday, Krenke said.