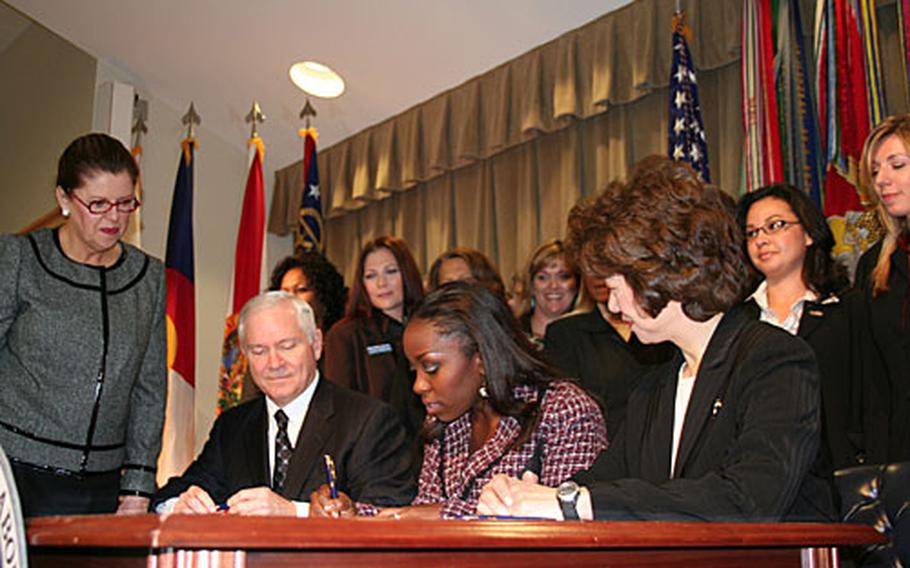 ARLINGTON, Va. &#8212; The Defense and Labor Departments have created a program to help military spouses pursue careers in sectors that are in such high demand that they are immune to frequent household moves.

The three-year, $35.2 million Military Spouse Career Advancement Initiative is a program for military spouses with sponsors in enlisted pay grades E-1 through E-5 and officers O-1 through O-3. Spouses must have at least a high-school diploma or GED.

Participants will get a $3,000 grant &#8212; renewable for a second year &#8212; that can be used to pay for expenses related to postsecondary education and training, Labor Secretary Elaine Chao said Wednesday during a Pentagon ceremony announcing the program.

Pentagon and Labor officials worked together to come up with the portable career fields as a &#8220;win-win&#8221; solution for both the nation, which needs people to do these jobs, and the military, which wants more employment opportunities for spouses, she said.

Military spouses experience unemployment rates three times higher than their civilian counterparts, even though 77 percent report that they want or need to work, Chao said.

But the frequent moves required by the military often make it difficult or expensive for spouses to establish long-term careers, or meet state credentialing and licensing requirements, she said.

The program &#8220;was created to help spouses overcome some of those financial barriers,&#8221; Chao said.

Limiting the program to high-demand occupations means that when a military family picks up and moves, a spouse who is trained to work in such a &#8220;portable&#8221; career should not only be able to find a new job, but advance up the ladder, &#8220;because they&#8217;re in a field where they are desperately needed,&#8221; Chao said.

Spouses can apply for the program at the One-Stop Career Centers on or near participating a installations&#8217;s Voluntary Education Center.