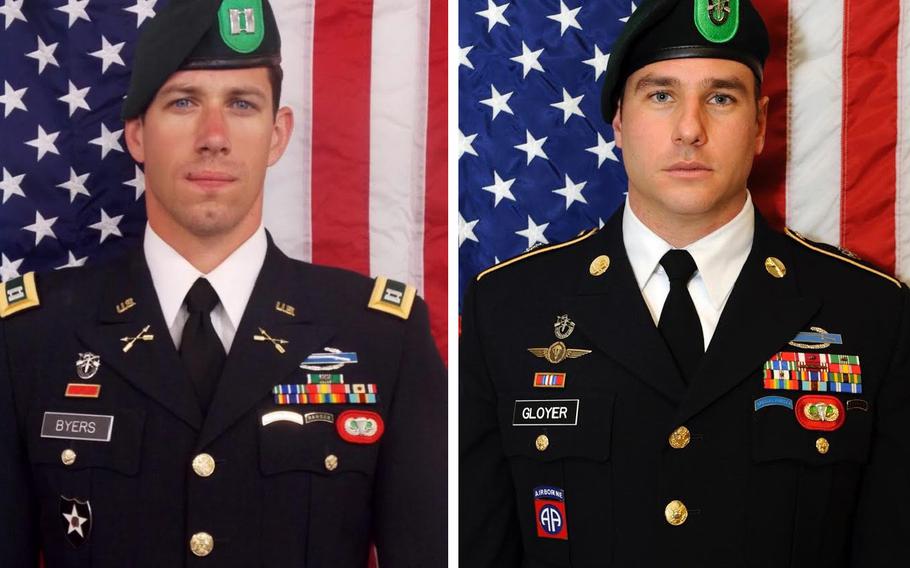 Capt. Andrew Byers, left, and Sgt. 1st Class Ryan Gloyer were identified Friday as the two soldiers who were killed during a battle in Kunduz, Afghanistan, on Thursday, Nov. 3, 2016. (U.S. Army)

KABUL, Afghanistan — The U.S. military conducted airstrikes near the northern city of Kunduz during an operation that ended Thursday morning in which more than 20 civilians may have been killed, officials said.

“The U.S. did conduct air-to-ground engagements in Kunduz in the early morning hours of Nov. 3 in defense of friendly forces,” said Gen. Charles Cleveland, spokesman for U.S. and NATO forces in Afghanistan.

Two American servicemembers were killed in heavy fighting and four others were wounded. The Pentagon on Friday identified the dead as Capt. Andrew D. Byers, 30, of Rolesville, N.C., and Sgt. 1st Class Ryan A. Gloyer, 34, of Greenville, Pa. They were both assigned to the 2nd Battalion, 10th Special Forces Group based at Fort Carson, Colo.

U.S. State Department Deputy Spokesperson Mark Toner said in Washington on Thursday that the incident was under investigation.

“We obviously take any reports or allegations of civilian casualties very seriously. This was, however, an Afghan operation,” he said. “We’ll work with our Afghan partners in order to investigate this incident thoroughly.”

Kunduz provincial police spokesman Hijratullah Akbari said that as of Friday morning, there were 24 civilian fatalities, including women and children. As many as 10 others were injured during the operation, which occurred in the village of Buze Kandahari, a Taliban-dominated area.

“This is not acceptable, we want justice,” Haji Mira Jan, a village resident, told Stars and Stripes. “No one has the right to target innocent people and brutally kill them.”

Many in the area have been outraged by the killings and appeared to blame them on the United States. Videos posted online of a demonstration in Kunduz city against the civilian killings show people chanting, “death to America.”

Akbari of the Kunduz police said that during the fighting on Wednesday, enemy fighters had taken shelter in the homes of Buze Kandahari residents, using them as human shields.

Gul Agha Amini, a tribal leader in the area, said whoever is responsible for the civilian casualties must be brought to justice.

“Everyone involved in the current fighting is the same for us, whether they are Taliban, Afghan forces or foreign forces, they all kill civilians,” he said. “We don’t want any apologies or fake promises. We want those people prosecuted who killed innocent women and children.”

Fighting across Afghanistan has been particularly intense in recent months with the Taliban threatening six provincial capitals, including Kunduz.

Last month, Taliban fighters briefly infiltrated parts of Kunduz, Afghanistan’s fifth-largest city. Fighting has continued in the city’s outskirts and in Kunduz province, where about 100 NATO advisers and an undisclosed number of other troops are assisting the Afghans.

The insurgents occupied the entire city last year before being expelled by government forces with the help of U.S. airstrikes. During that operation, U.S. airstrikes destroyed a hospital run by the non-profit Doctors without Borders, killing 42 people. The U.S. punished 16 servicemembers.