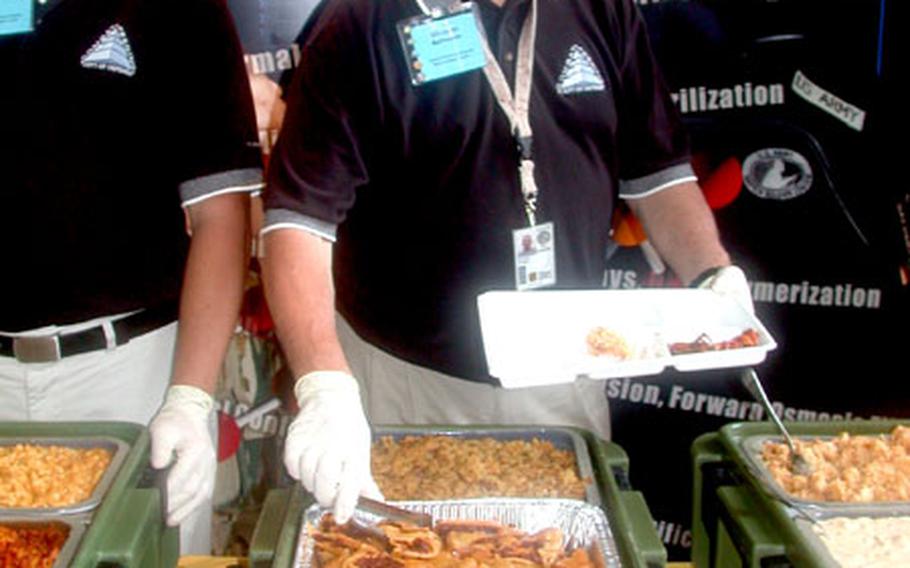 (See end of story for a list of the new MRE meals and their contents.)

ARLINGTON, Va. &#8212; As they design the combat rations that will keep U.S. troops fueled and moving in the field, the specialists at the Defense Department&#8217;s Combat Feeding Directorate sometimes look for meals that provide emotional nourishment, as well as physical.

With its echoes of Thanksgiving meals with family and friends, &#8220;stuffing,&#8221; said Kathy-Lynn Evangelos, an executive assistant in the feeding directorate, &#8220;is comfort food.&#8221;

The stuffing, with its chunks of sausage and fresh herbs, was the hit of the day Thursday, when directorate staff traveled from the U.S. Army Soldier Systems Center in Natick, Mass., to Capitol Hill to give civilians a taste of the latest in troop combat chow.

Natick food technicians were kept busy dishing up more than a dozen other entrees, ranging from cheesy ham and potatoes to beef burgundy. Some are destined for the field as soon as 2005, while others, such as the stuffing, are still waiting for a thumbs-up from troops who will test them this summer.

Natick is continuing a push to improve combat rations that began after Operation Desert Storm, when MREs were so bad &#8220;the best way to eat them was wearing goggles and with a bad head cold,&#8221; according to Gerald Darsch, head of the combat feeding group.

Since 1993, more than 150 new items have been improved for inclusions in the meals, and menus are reviewed and reformulated on a yearly basis, Darsch said.

Troops also have more variety to choose from: 24 different MRE menus, instead of 12.

A larger selection is important for morale, First Sgt. Colin Rich, a combat veteran with the 504th Parachute Infantry Regiment out of Fort Bragg.

Variety is especially critical for the minority of troops who have to eat MREs for weeks, and occasionally months, on end: Darsch said he&#8217;s heard from a one-star general deployed to Iraq who together with his troops ate &#8220;nothing but MREs, three times a day, for 118 days straight.&#8221;

Told that many servicemembers eat MREs for weeks at a time, Richard Hoar, a 22-year-old staffer on the House Committee for Education in the Workforce, looked startled.

Then he looked impressed.

A fellow staffer on the education committee, 23-year-old Donald McIntosh, said the spread was uninspiring.

&#8220;It looked good when I first saw it, but everything tastes the same, honestly,&#8221; said McIntosh of his first encounter with MREs.

The Meal, Ready-to-Eat is used by all the services to sustain individuals during operations that preclude organized food service facilities. The following is a list of what&#39;s in the new MREs.

The texture of many foods, thanks to better processing methods. Rice stays separate and isn&#8217;t mushy; beef chunks are grained and chewy, like normal steak, instead of that &#8220;mystery meat&#8221; quality.More interesting seasoning. Many new entrees have clearly visible herbs, such as the oregano in tomato sauce, while others offer more sophisticated flavors, such as fire-roasted red peppers.Condiments are also more varied &#8212; not just salt or Tabasco sauce. New meals also offer red pepper, spicy ketchup and seasoning blends.What still needs work

Keeping the taste and texture of cheese in meals prepared with it. &#8220;Cheese doesn&#8217;t do well,&#8221; even with the improved MRE processing methods, according to Janice Rosado, a physical scientist at the Combat Feeding Directorate.High cooking temperatures also prevent pasta from being offered &#8220;al dente,&#8221; or chewy, although it isn&#8217;t as mushy as it used to be, according to troop feedback.Sources: Department of Defense Combat Feeding Directorate at the U.S. Army Soldier Systems Center, Natick, Mass.; interviews with military and civilian taste testers.