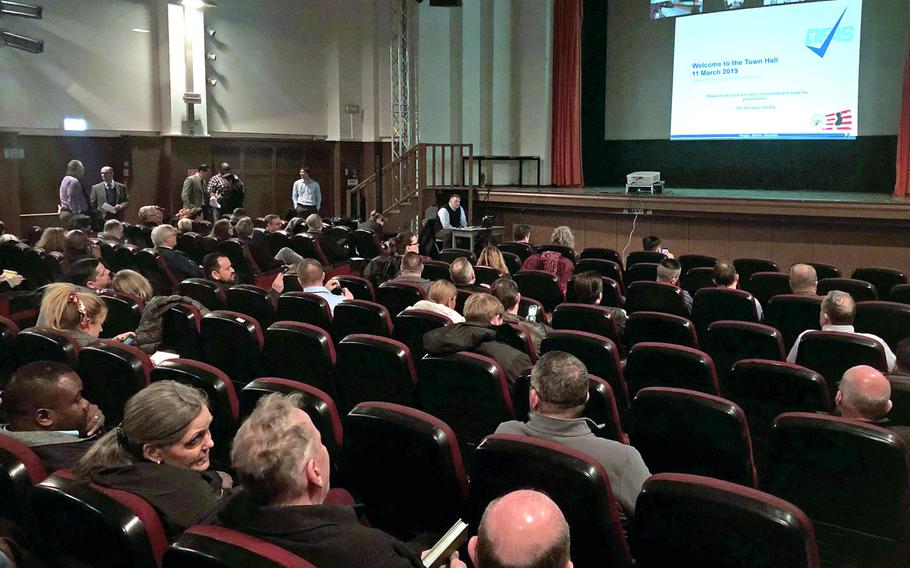 Defense Department employees participate in a meeting presenting information about the updated tax laws in Wiesbaden on March 11, 2019. The changes in tax laws are costing some employees thousands of dollars in additional fees. (Aaron Knowles/Stars and Stripes)

WIESBADEN, Germany — Defense Department civilians who made permanent-change-of-station moves within the past two years soon will receive debt notices that also will include unanticipated interest charges and potential state tax penalties because of a 2017 tax law change, military officials in Europe said.

The Defense Finance and Accounting Service office is now calculating amounts owed by affected employees with a plan to mail debt letters in the coming fall, Army officials said. Once the letters are received, employees will have 45 days to pay the entire amounts owed or to work with DFAS to determine payment plans, U.S. Army Europe officials said at a Monday town hall meeting in Wiesbaden.

Many civilians said they were unsure about how much they owed and expressed frustration with an overall lack of clarity about the tax change, which has created widespread confusions at military finance offices.

Amounts owed in federal taxes can vary from $1,000 to more $11,000, according to the Army, and those numbers could go up. Recently, DFAS announced that state taxes have yet to be factored in. The tax amounts at the state level still were to be determined, it added.

The confusion stems from the Tax Cuts and Jobs Act of 2017, which made most PCS entitlements taxable and reported as taxable income to the IRS when it was implemented in January 2018. DFAS, however, didn’t implement a system change to collect tax withholding properly as required by the new law for direct reimbursements until 10 months after it took effect.

Allowances received for household-goods shipments are now taxable, but long-term storage and privately owned vehicle shipments to and from assignments outside the continental U.S. are not taxable income, DOD has said. Other moving-expense allowances that are now taxable under the 2017 law include airfare, passport and visa fees, en-route lodging and per-diem expenses.

The General Services Administration didn’t put out its first bulletin informing employees of the implemented tax changes until May 2018, clarifying that agencies could reimburse “substantially all” moving-related expenses for civilians who go from one federal job to another through Withholding Tax Allowance and Relocation Income Tax Allowance.

However, new hires and those retiring from federal jobs are not eligible.

Employees who took jobs prior to being notified of the tax implications learned that they will still be liable for the debt regardless of when they were informed.

Unclear consequences about what the changes meant was the reason the organization didn’t notify its employees earlier, said Suzanne Torres, the civilian personnel director for USAREUR.

“We were waiting for that decision to first find out if we would even be covered in order to file RITA,” said Torres, referring to one of the tax allowances. “All of the implications were unknown.”

In the summer of 2018, the command began putting out announcements alerting employees to the tax changes and adding information to vacancy announcements, Torres said.

That’s really the first time that we could announce to the public that there is a major tax change, you need to be aware of it,” she said.

The Office of the Secretary of Defense has a proposal that would exclude household goods, the most expensive portion of the move, from being taxed. U.S. Africa Command also has requested exemptions for retirees and new employees. However, there have been no decisions on those matters.

Employees seeking more information on the new tax changes or assistance in filing for RITA can contact DFAS by email at DFAS-CIVREL-Questionsonly@mail.mil or by phone at 888-332-7366. More information can be found online at https://www.dfas.mil/AskDFAS.html.