DOD: China's military buildup in Pacific could require a US response 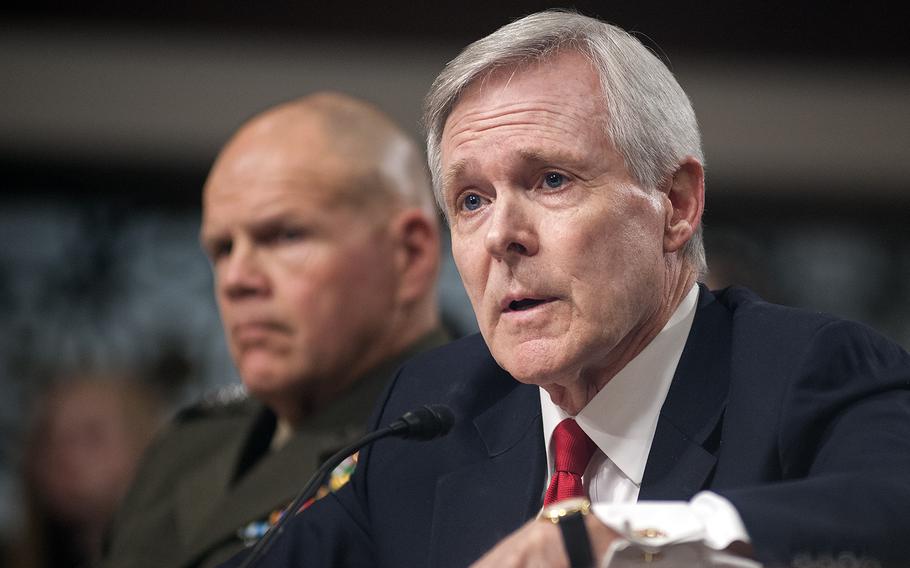 WASHINGTON — Navy and Marine Corps leaders warned Friday that China’s rapid military buildup in the Pacific Ocean could force the United States to move ships and forces in response.

Friday’s comments from Chief of Naval Operations Adm. John Richardson, Navy Secretary Ray Mabus and Marine Corps Commandant Gen. Robert Neller followed a week of warnings by Adm. Harry Harris to Congress that the pace of China’s militarization on a string of man-made islands in the South China Sea is changing operations in the Pacific.

During his testimony this week on Capitol Hill, Harris, commander of the Pacific Command, cautioned China has swiftly moved jets, missiles, bombers and radars onto many of the man-made islands that it built during the last year. China developed the islands by building on top of submerged coral reefs and other underwater land features in the South China Sea.

“These are actions that are changing, in my opinion, the operational landscape in the South China Sea,” Harris told lawmakers.

The weapons that China is placing on those islands could require the United States to reconsider its own presence in the region, Richardson and Neller said Friday at an event hosted by the Brookings Institution, public policy research group in Washington, D.C. The Navy already wants to have 60 percent of its planned fleet of 308 U.S. warships committed to the Pacific by 2020.

“That number is really based on analysis from 2006,” he said. With China’s recent developments, “that’s becoming a more urgent situation.”

“The DF-21 [anti-ship ballistic missile], which they have developed, and the DF-26 [intermediate range ballistic missile], which they’re developing, could pose a threat to our carriers,” Harris told the Senate Armed Services Committee this week. “I think, though, that our carriers are resilient and we have the capability to do what has to be done if it comes to that.”

Neller said China’s movements have the Marines also rethinking its posture in the Pacific.

“The survivability ... because of the missiles, when we did the laydown and the plan, the capabilities that our potential adversaries had didn’t exist,” he said. “So do we need to take a look at how we are going to harden ourselves, or where we are going to position ourselves?”

On Thursday, Harris said the recent developments on the man-made islands would not stop the Navy from deploying an aircraft carrier to the South China Sea.

“Short of war, I’m aware of the threat. I’ll pay attention to the threat,” he said. “But that is not going to prevent us from flying, sailing or operating wherever international law allows.”