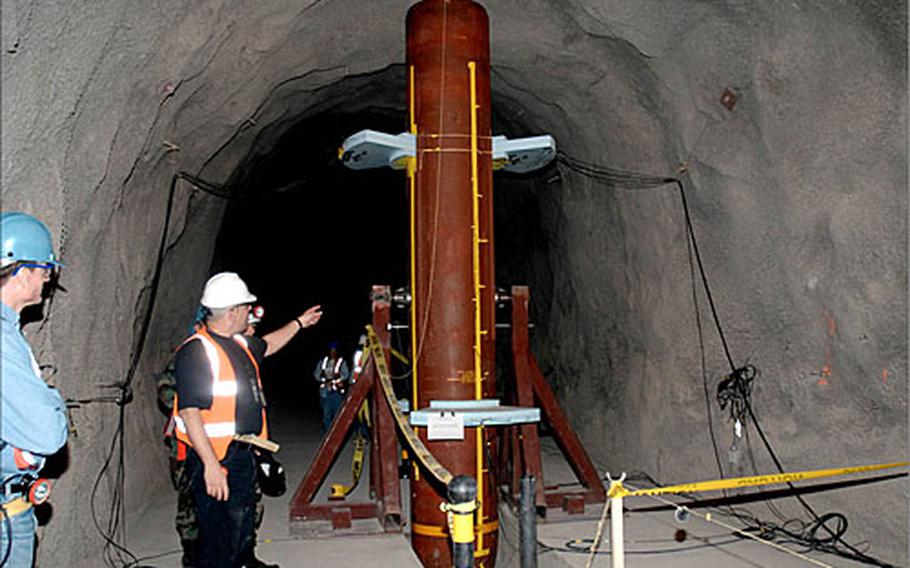 A deep-earth penetrator under development by the Air Force showed earlier this year that it can burrow under hundreds of feet of solid rock. On Monday, DOD asked Congress for $87.7 million for the project, as part of the second supplement amendment to the 2008 defense supplemental budget. (Courtesy of the Defense Reduction Threat Agency)

ARLINGTON, Va. &#8212; The Pentagon has asked Congress for nearly $88 million to fund the development of a deep-earth &#8220;bunker-buster&#8221; weapon that critics say is specifically being designed to attack Iran.

The Massive Ordnance Penetrator, or MOP, is a joint project between Northrop Grumman and Boeing.

At 30,000 pounds and 20 feet long, the mass of the bomb makes it three and a half times more powerful than the most powerful weapon in the Air Force&#8217;s inventory. The bomb carries 6,000 pounds of high explosives.

The MOP&#8217;s job is to destroy deeply buried and what the military calls &#8220;hardened&#8221; targets, or those specifically reinforced to survive strikes with high explosives.

Like all modern &#8220;smart&#8221; munitions, the weapon is virtually a mini-aircraft, with tail fins that steer the weapon in flight via preprogrammed minicomputers and an integrated global positioning system that keeps it on target, according to DTRA.

The first successful tests of the weapon took place at the end of March at the White Sands Missile Range in New Mexico, according to the Air Force and DTRA press releases issued at the time.

The budget request is part of an amendment to the fiscal 2008 defense budget supplemental request that the White House submitted Monday to Congress.

The money is in two parts: $83.5 million for continuing the development of the MOP weapon itself, including a &#8220;technology demonstration&#8221; sponsored by DTRA that would conclude at some point in fiscal 2008; and another $4.2 million to modify the B-52 bomber as a launching platform, Air Force spokeswoman Vicki Stein told Stars and Stripes on Wednesday.

According to the Pentagon, the MOP is an &#8220;urgently needed, critical global strike capability to fight the war on terrorism.&#8221;

Air Force leaders say the system is not being developed specifically for a pre-emptive strike against Iran.

Because the bomb is so large, only two bombers &#8212; the B-2 and the B-52 &#8212; can accommodate it, an issue for the Air Force trying to modernize and manage an aging fleet, Air Force Secretary Michael Wynne said.

And another major issue, the two leaders said, is that Democratic opponents in Congress have been working to kill this and other &#8220;bunker-buster&#8221; programs because they believe it is a back-door effort to developing another nuclear weapon.

&#8220;So there&#8217;s the nexus of a few issues here,&#8221; Moseley said. &#8220;Who can carry it, just by the physics of the weapon; what are the set of targets that you would look at something like this; how do you proceed with the tests; how many would you buy if the tests works out; and how do you weaponeer that inside the theater &#8212; all while you&#8217;ve got some [congressional bill] language that is sensitive to the notion in the first place.&#8221;