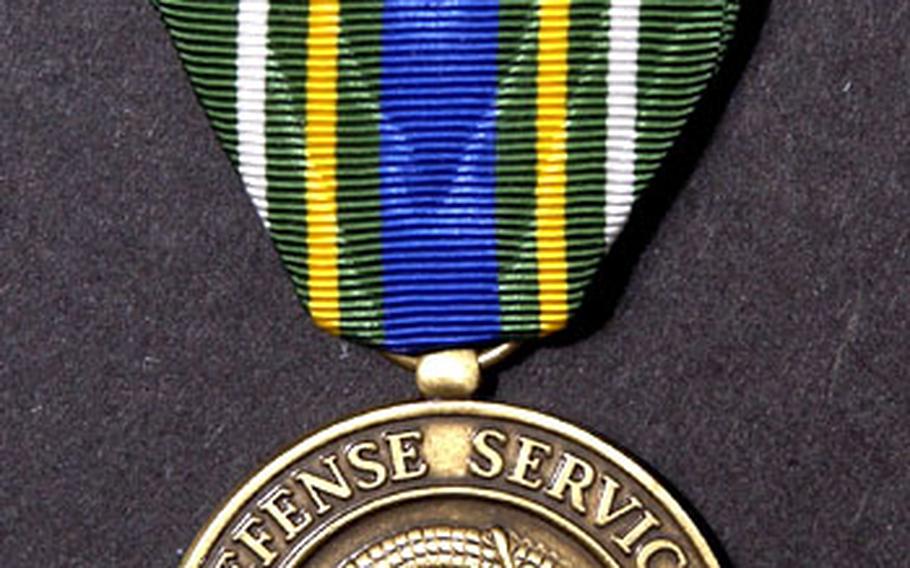 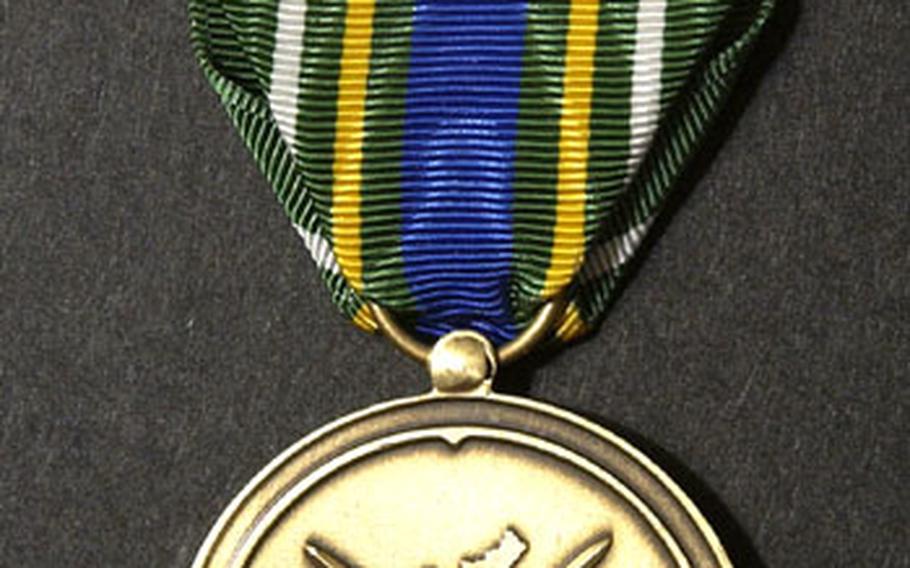 The Department of Defense announced Monday the creation of the Korean Defense Service Medal, capping a years-long effort at recognizing those who have served in South Korea since July 1954.

&#8220;The KDSM is a service medal to give special recognition for the sacrifices and contributions made by members of the U.S. Armed Forces who have served or are serving in the Republic of Korea,&#8221; read a Pentagon news release announcing the creation.

&#8220;The area of eligibility encompasses all land area of the Republic of Korea, and the contiguous water out to 12 nautical miles, and all air spaces above the land and water areas.&#8221;

The announcement means hundreds of thousands of current and former U.S. servicemembers are eligible for the bronze-colored disc, suspended from a green ribbon with blue, gold and white stripes.

The effort gained steam about three years ago, when a member of the Korean Defense Veterans Alliance and constituent of Rep. Elton Gallegly wondered why those who served in South Korea after the war weren&#8217;t awarded a campaign medal. Gallegly sponsored a 2001 bill to create the medal. After the Senate passed a similar measure, President Bush signed it into law in December 2002.

Veterans and those who have served in South Korea hailed the decision. More than 37,000 troops serve in South Korea each year, across a heavily fortified border from the million-man North Korean military. Since 1953, there have been 40,000 reported armistice breaches, and more than 1,200 servicemembers have died on peacetime duty.

It has taken until now for the Pentagon&#8217;s approval process to complete the creation, officials said.

Soldiers in South Korea seemed pleased, though a bit nonplussed, about the announcement.

&#8220;That&#8217;s cool. It gives everyone something else to put in their jacket for being here,&#8221; said 18th Medical Command Spc. Lisa Jensen, referring to military personnel files that help determine promotions.

&#8220;Hey, I get another one to go with the Overseas Service [Ribbon]. But really, it&#8217;s nice that the soldiers here now and the ones who were here before are getting recognized.&#8221;

According to the Pentagon, each military department will make its own regulations for processing, awarding and wearing of the medal. That includes provisions for veterans, retirees and next of kin for deceased servicemembers.

The four-clawed dragon is &#8220;a traditional symbol of Korea and represents intelligence and strength of purpose,&#8221; the Pentagon release said. The sprig of laurel symbolizes &#8220;honorable endeavor and victory.&#8221; The bamboo is a reference to Korea, officials said.

The reverse side of the medal has two crossed swords superimposed on a map of the Korean peninsula, ringed by a circle &#8220;garnished with five points.&#8221; The swords signify defense of freedom and the readiness to engage in combat to protect that freedom, officials said. The five points are meant to evoke a traditional five-petal symbol found on Korean armor.

The medal hangs from a ribbon of green (symbolizing Korea), blue (indicating overseas service and commitment to peace), gold (excellence) and white (idealism and integrity).

The KDSM period of eligibility is from July 28, 1954, to a future date to be determined by the Secretary of Defense.