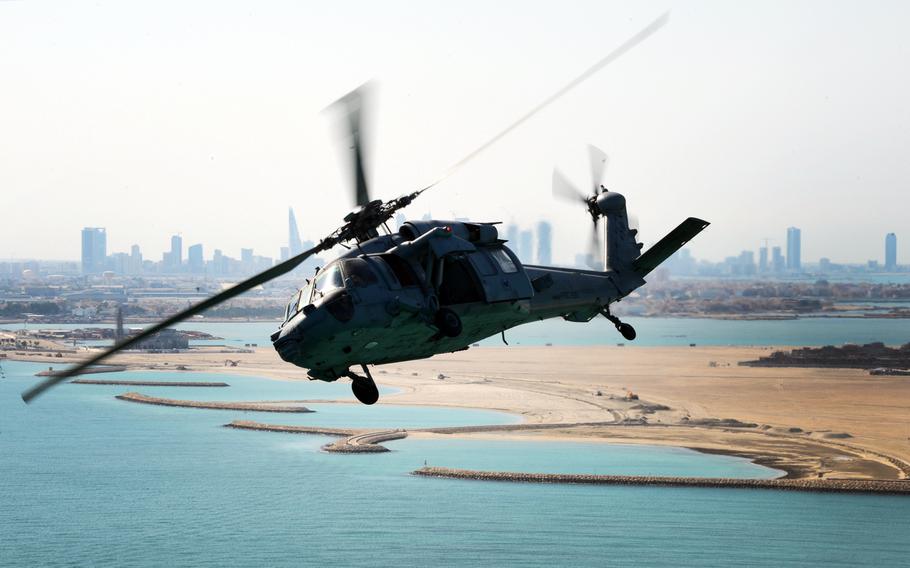 A U.S. Navy MH-60S Seahawk helicopter, assigned to the Chargers of Helicopter Sea Combat Squadron 26, returns to base in Manama, Bahrain, after completing a patrol in the Persian Gulf during exercise Spartan Kopis in December, 2013. (Michelle L. Turner/U.S. Navy)

Note: This story has been updated.

WASHINGTON – On Friday, the Defense Department announced that many areas will be removed from the list of places where U.S. servicemembers qualify for imminent danger pay.

“Today we are announcing the recertification of some locations as Imminent Danger Pay areas while we are discontinuing that designation for others,” Pentagon spokesman Col. Steve Warren told reporters.

Of the areas previously designated for IDP, about one-third were decertified. IDP is intended to provide compensation bonuses to servicemembers deployed in locations that are relatively dangerous.

The following land areas and the airspace above them were decertified: Bahrain, Kuwait, Qatar, Saudi Arabia, Serbia and Montenegro.

Some countries are on the IDP list even though the U.S. doesn’t have any servicemembers deployed in those countries, including Syria and Iran.

The IDP recertification review process began in 2011 and included an in-depth threat assessment from the combatant commands in coordination with the Joint Staff and the military services. The last time the IDP list was changed was 2011. It is an ongoing assessment, Warren said.

In 2012, (the last year for which IDP statistics are available), about 194,000 servicemembers received IDP. Approximately 50,000 servicemembers will be affected after these changes are made, according to DOD spokesman Lt. Cmdr. Nate Christensen.

In 2012, DOD spent approximately $500 million on IDP. This policy change will save DOD $108 million per year, officials said.

Warren said these IDP cuts were not driven by budgetary concerns.

The current IDP rate is $7.50 per day, with a maximum IDP of $225 per month. Those numbers will not change, Christensen said.

“Our men and women help to bring peace and stability to many places, and just because Imminent Danger Pay is discontinued doesn’t suddenly make those countries, waters or airspaces any more safe. One can only hope that this decision was done based on real world threat assessments and not for fiscal reasons,” Joe Davis, the Public Affairs Director for the Veterans of Foreign Wars, said in an email to Stars and Stripes.

Lawrence Korb, a military budget expert at the Center for American Progress, believes that budget constraints did play a role in the policy change, but he supports the IDP rollback.

“I think what’s happened is that the sequester and the budget cuts really have forced the department to do things they should have been doing anyway,” he said.

Korb thinks IDP has been too generously distributed.

“You got combat pay in Bahrain. I was in Bahrain a couple weeks ago. I’d sooner be there than some of the cities in the United States [when it comes to personal safety],” he said in an interview with Stars and Stripes.

The IDP changes will not impact deployed servicemembers’ Combat Zone Tax Exclusion status, except for those serving in Kyrgyzstan, Tajikistan and Uzbekistan. Personnel deployed to those three countries will no longer be eligible for CZTE tax breaks after the IDP designation is removed.

“At this time, no decision has been made to end the Combat Zone Tax Exclusion [benefit program],” Christensen said in an email to Stars and Stripes.

CZTE is a provision in the Internal Revenue Service tax code that provides tax relief to U.S. military and support personnel involved in military operations in combat areas. DOD also announced that, effective June 1, Hardship Duty Pay-Location monthly rates in East Timor, Haiti, Liberia, Montenegro, Rwanda, Saudi Arabia, Serbia, Kyrgyzstan, Tajikistan and Uzbekistan will be increased to $150. The HDP-L monthly rate in Bahrain is established at $50, according to a memo signed on Dec. 31 by Acting Under Secretary of Defense for Personnel and Readiness Jessica Wright.

HDP-L is intended to compensate servicemembers who are deployed in areas where living conditions are poor.