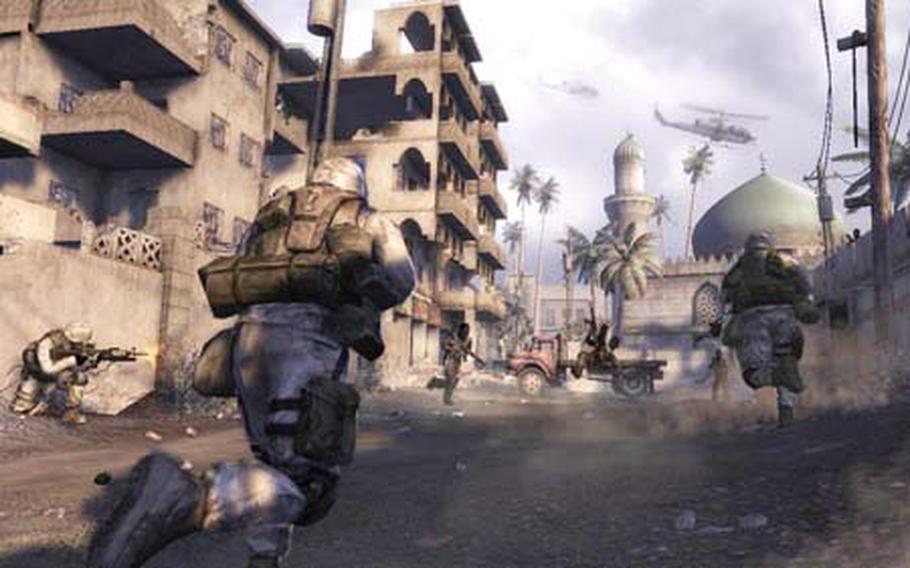 Parents of troops who died in the battle of Fallujah say the upcoming video game “Six Days in Fallujah” is distasteful, while the game’s makers liken it to a cross between a documentary and providing entertainment they say soldiers want. (Courtesy of Konami)

Parents of troops who died in Iraq are speaking out against a game based on the second battle of Fallujah, saying it is distasteful and alleging that game makers are looking to cash in on the death of U.S. troops.

But the makers of "Six Days in Fallujah" say the game is a combination of documentary film and military-shooter entertainment. And, they say, dozens of Marines from the actual battle have worked on the game as consultants.

Konami Digital Entertainment and Atomic Games are working on the title that will have gamers engaged in virtual life-and-death combat during the late 2004 battle.

The bloody battle saw house-to-house fighting and spawned the iconic "Marlboro Man" photo of a battle-weary Marine smoking a cigarette. Some 38 U.S. troops died in the assault, and scores more were wounded.

Gold Star Families Speak Out, a group of family members of those killed in Iraq and Afghanistan, is blasting the game.

But according to the companies, U.S. troops wanted the story of Fallujah told through a video game. Marines who fought in the battle actually reached out to video-game makers to tell their story, said Brandon Cox, a Konami spokesman.

"From our perspective, it&#8217;s being developed with over three dozen Marines who fought in the battle because this is how they wanted their story to be told," he said. "&#8230; We are taking every step to make this an engaging experience, but we do not want to make people feel uncomfortable."

Love the idea or hate it, the game is getting lots of pre-release buzz because of the controversy.

The families have been asked why they are also not opposed to war movies and books.

Mike Ergo, a 26-year-old former Marine who fought in Fallujah, is one of the consultants on the game.

"What I am hoping this game will do is bring a better understanding of the gravity and chaos that was Fallujah," Ergo told McClatchy News.

Konami will address concerns over sensitivities raised by the game and partner with a veterans organization, Cox said. He did not offer any other specifics about what that the company was undertaking to address sentiments, saying Konami had just announced the game on Tuesday.

But in an interview posted online this week, the game&#8217;s creators made a claim sure to stoke more controversy.

Peter Tamte, president of Atomic Games, said in the interview that insurgents who fought against the Marines in the battle "contributed" to the game.

"I think all of us are curious to know why [the insurgents] were there," Tamte said. "&#8230; Many of them knew that they were going to die, and they went there to die. And I think that&#8217;s a perspective that we should all understand."

Soldiers playing video games at Landstuhl Regional Medical Center on Tuesday had mixed opinions about the Fallujah game. While two soldiers freely offered their opinions, a third who was in the Marines and fought in the Fallujah battle said he did not want to talk about the game.

The soldiers were playing "Halo" and "Call of Duty" at the USO Warrior Center and are at Landstuhl for treatment of noncombat medical issues.

"You need to respect the family members," said Army 1st Lt. Clifford Slike. "What it looks like is, it&#8217;s opening some wounds for the families that they really don&#8217;t want to have to go through again."

On the other hand, Army Pfc. Jose Lopez mentioned that because World War II took place 60-plus years ago, there&#8217;s no outcry over the games that re-create those intense battles. With the battle of Fallujah happening just a few years ago, the immediacy is likely the source of the strong reaction. Lopez said that it&#8217;s possible he&#8217;ll play "Six Days in Fallujah" when it&#8217;s released.