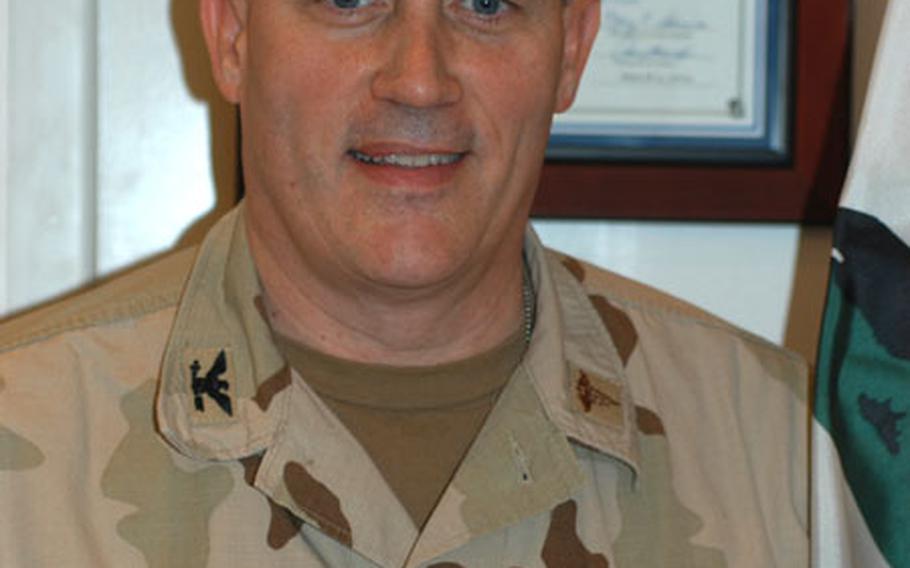 BAGHDAD &#8212; Although the price is right and the kebabs may be tasty, U.S. military officials say soldiers should avoid eating food prepared in local Iraqi restaurants.

That next kebab could include a side of hydatid, a parasitic tapeworm disease that may not show symptoms for years.

Hodges said the number of cases of food-borne illness in U.S. personnel is hard to track. Preventative medicine officials estimate between 100 and 450 soldiers in Iraq may be sick each week from food and water sources.

But the number of sick soldiers is tough to put a number on for a couple of reasons, Hodges said. Many illnesses, such as a stomach virus, pass so quickly that soldiers may not seek treatment.

Other maladies such as hydatid &#8212; which comes from meat or water contaminated with the tapeworm egg &#8212; usually goes unnoticed for its incubation period of 12 months to many years. It involves slow-growing tumors that can reach grapefruit size and cause organ dysfunction or other complications if the cysts are ruptured.

In other words, a soldier from the first rotation of Operation Iraqi Freedom who ate at local restaurants may not be showing symptoms yet. Treatment involves surgically removing the large cysts and following up with tapeworm medication, Hodges said.

To be safe, soldiers should only eat at the U.S. dining facilities or Army and Air Force Exchange Service restaurants, he said. Even Iraqi restaurants located within U.S. controlled areas, such as the Green Zone in Baghdad, are not approved eating places for U.S. troops.

Veterinary Services soldiers check food for the U.S. dining facilities at shipping plants in places such as Kuwait and Australia and at warehouses where the food is stored.

Preventive Medicine personnel inspect the food at the dining-facility level and at AAFES restaurants to ensure proper preparation methods are being followed and food-service personnel are using good personal hygiene, Hodges said.

Neither Veterinary Services nor Preventive Medicine inspects local restaurants, however.

An Iraqi Ministry of Health division inspects the restaurants, but Hodges said inspectors are not as well trained as Army inspectors.

Additionally, since beef and lamb, favorite meats among Iraqis, are very expensive, restaurants may look for cheaper and less sanitary sources for the meats, Hodges said. &#8220;Beef at a restaurant may actually be a mixture of beef and who knows what,&#8221; Hodges said.

And as tempting as they may appear, even fruit and vegetable stands may harbor disease.

&#8220;Hard-skinned fruits are not a big problem, unless they are organically fertilized,&#8221; Hodges said. The process, popular in some parts of Asia, involves using human feces as fertilizer for fruit and vegetables.

There are also are no approved water sources in Iraq, despite extensive efforts by Veterinary Services and Preventive Medicine to locate one.

Hodges said these problems have been around since before the war, and cited one case where an underground sewer pipe was somehow crossed directly with a pipe that brought drinking water to a restaurant.

While troops may get tired of the dining facility or Burger King, trying something different at a local restaurant may not be worth the risk.

Food-borne illnesses found in the Middle East, and their symptoms: