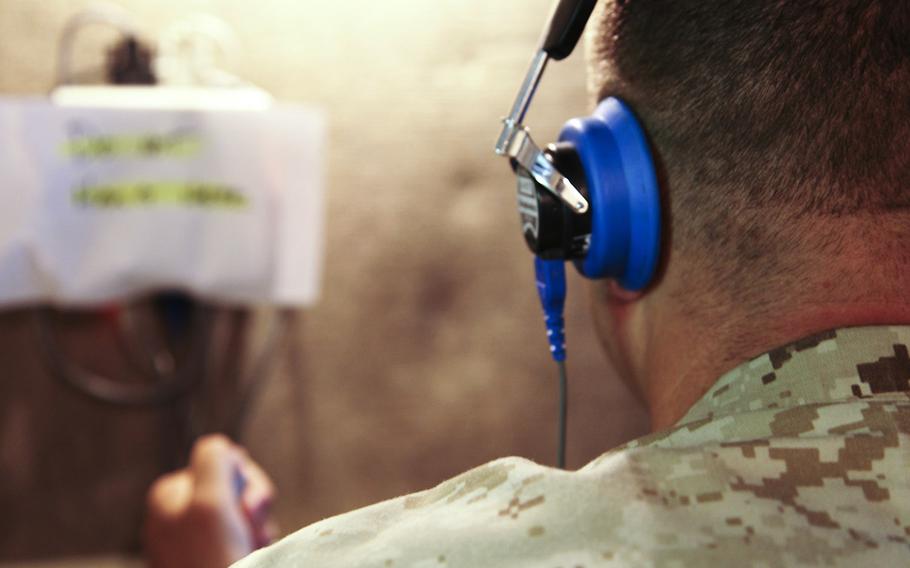 Air Force Col. Mark Packer, executive director of the Defense Hearing Center of Excellence and chief of the otology, neurotology and cranial base surgery at the San Antonio military health system, talks about military hearing loss and treatments on Nov. 30 during a federal health conference in San Antonio. (Dianna Cahn/Stars and Stripes) Dr. Devin McCaslin, an expert in vestibular science at the Dept. of Hearing and Speech Sciences at Vanderbilt University School of Medicine , talks about advances in the study and treatment of ear damage on Nov. 30 during a federal health conference in San Antonio. (Dianna Cahn/Stars and Stripes)

The chopper lands in an open field in the middle of the night — the noise loud enough to wake residents in the nearby village but far enough away not to alarm them. On board, the men don their gear and goggles, jump past the thumping rotors into the silence of the night around them. Those men wearing earplugs for the flight pull them out as they get to work.

For the next two hours, they move soundlessly through fields and past compounds, listening acutely for any indication they’ve been spotted.

They reach their target just as light takes over the horizon. The order is given. The men kick down a door. A firefight ensues. Explosions and gunfire burst the quiet of dawn, rattling eardrums.

The scenario is a familiar one for troops in combat. And though they often don’t know it, these troops suffer invisible damage to their ears every time they step into the fight — whether in the field or in training. The damage is severe enough that hearing loss and tinnitus have remained the top combat injuries to U.S forces since World War II — with more than 2.3 million veterans in 2014 receiving disability compensation for those injuries.

Yet, these injuries go largely unnoticed. The symptoms are often left untreated for years before servicemembers seek help, and then it’s often too late.

The wars in Iraq and Afghanistan have given these battle wounds new focus. As doctors study the impacts of improvised explosive devices and other blasts associated with the post-9/11 wars, they are learning new things about ear damage that might change the way soldiers prepare for the battlefield in the decades to come. They are also looking at what blast damage to the ear can tell doctors about injury to the brain.

From new technologies aimed at better safeguarding and monitoring hearing, to promising new drug studies that could help protect the ear and brain from the impacts of concussion and powerful noises, revelations by scientists are making their way into military practice to protect troops.

“We’ve seen that the hearing injury is prevalent yesterday and today, but we want to change that tomorrow,” said Col. Mark Packer, a doctor and director of the Defense Hearing Center of Excellence and chief of otology, neurotology and cranial base surgery at the San Antonio military health system.

“Part of the problem with the hearing injury is the lack of awareness because the ear does not bleed or hurt,” said Packer. “It is one of those insidious, invisible injuries like brain injury.”

At a conference at the end of November in San Antonio, Packer was among a group of doctors presenting their findings on what lessons have been learned from the longest wars that U.S. troops have fought. His conclusions: Noise is ubiquitous and hearing loss is often hidden, cumulative and extremely damaging to the force. But awareness, monitoring and prevention fall far short.

Still, doctors have made significant revelations about hearing damage and its impact on the troops and their readiness.

After the first Gulf War, doctors determined that hearing loss affects performance — more than doubling the time it takes to identify a target; increasing by more than 30 percent the accuracy of hearing commands; and halving the accuracy of killing enemy targets. The Hearing Center of Excellence has been studying that link ever since.

A recent study at West Point, N.Y., demonstrated that hearing loss also impacts behavior, Packer said. The study, conducted by Douglas Brungart, the chief scientist at the Audiology and Speech Center at Walter Reed National Military Medical Center in Bethesda, Md., involved cadets learning to work together as a team to engage the enemy. Without training, cadets all converged fire on the center mass of the enemy, and they quickly got outflanked. With training and collaboration, they learned to maintain their own lanes of fire and gained the advantage.

When hearing-loss simulators were placed on them, however, the cadets went back to working on their own. By losing the advantage of communication, they lost their strategy. In another study, trainees who lost their hearing stopped fighting and sought shelter from the enemy, Packer said.

“The ability to hear increases survivability, safety and lethality,” Packer said. “So all these elements of war success and mission performance hinge on the assumption your hearing is good.”

The dichotomy at wartime is that from aircraft and trucks to weaponry and explosives, the military creates a huge amount of noise while at the same time demanding clear communication from the troops. So forces on patrol go through long periods of needing their hearing acuity to spurts of extreme noise, where there is need to protect their ears.

Because the troops need their hearing to get the job done, most forego ear protection outside of training.

New technological and medical advances are emerging that could help protect hearing in combat conditions. Packer’s team is involved in monitoring one promising pharmaceutical study of a new anti-inflammatory that is already in the second phase of human testing. By working at the molecular level, the drug helps protect the ear against the impact of a noise or blast.

The drug is being tested at the drill-instructor school at Fort Campbell, located both in Tennessee and Kentucky, where they spend a lot of time on the range, Packer said. And because blast exposures have similar impacts on brain injury and visual impairment, the drug could potentially protect against brain injuries as well, he said. If successful, “the study could be a very significant thing,” he said.

Scientists also are working on better physical protections. One laboratory is trying out a new mode of hearing protection that senses loud noise and automatically turns on, then shuts off again when the threat has passed, said Devin McCaslin, an expert in vestibular (hearing and balance) science at the Department of Hearing and Speech Sciences at Vanderbilt University in Nashville, Tenn. They are still trying to make one that does not require batteries.

Meanwhile, the loss of hearing impacts not only performance, but frame of mind. Hearing loss creates a sense of isolation and is often associated with depression. It also brings fatigue, McCaslin said. A person struggling to hear has to concentrate harder. It raises the question of whether a servicemember will lose concentration sooner.

Hearing loss is subtle and sometimes undetectable. In particular with blasts, much like concussions and traumatic brain injury, initial symptoms often subside, but cumulative damage can remain unseen and surface later. Experts are pressing the military to incorporate regulated auditory screening of its forces.

That line of study also has led to some new technological advances in monitoring for hearing loss. Until now, high-level hearing tests had to be done in a hearing booth with a trained expert — usually far away from the battlefield. It meant hearing tests were often done outside the window of detection.

Scientists now have a highly sensitive, boothless audiogram that is portable and functions much like an ear thermometer, reading brain-stem responses. The tablet-based test does not require significant expertise and could become part of a medical kit at every forward outpost or aid station. These tests could be conducted shortly after blasts — getting to servicemembers before temporary symptoms disappear.

It also could enable regular hearing tests for servicemembers — something they could do while they wait in line at the dentist’s office for their regular cleaning, Packer said.

Changing the statistics will require the military to get ahead of the damage, Packer said.

It means making servicemembers aware of the potential damage to their hearing and making the military aware of how damaging hearing loss is to the force. It also means making protections practical and accessible to servicemembers in ways that will not hamper their ability to perform on the battlefield.