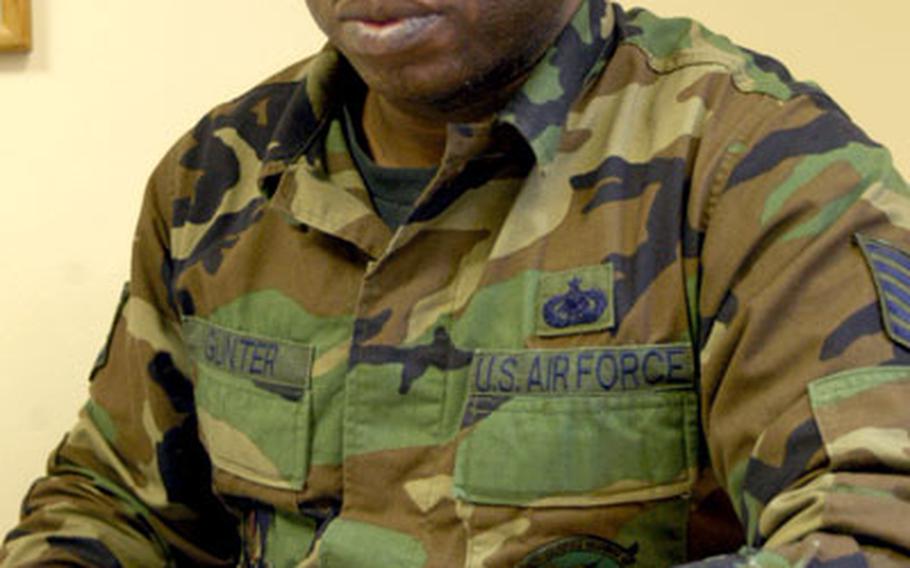 Tech. Sgt. Kevin Gunter, on his first day back to work as a personal property office manager for the 100th Logistics Readiness Squadron at RAF Mildenhall. (Ben Murray / S&S)

Tech. Sgt. Kevin Gunter, on his first day back to work as a personal property office manager for the 100th Logistics Readiness Squadron at RAF Mildenhall. (Ben Murray / S&S) 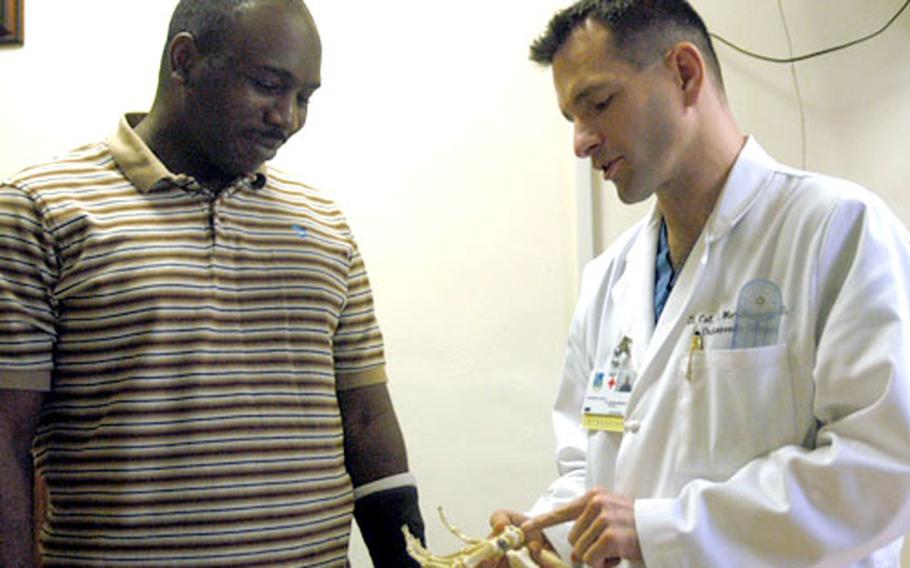 Tech. Sgt. Kevin Gunter shows the helmet he was wearing the day he overturned his motorcycle. His protective Kevlar jacket was shredded in the fall, he said. (Ben Murray / S&S)

RAF LAKENHEATH &#8212; Many of the words doctors use to describe Tech. Sgt. Kevin Gunter&#8217;s damaged wrist are drawn from the lexicon of trauma.

The breaks were so bad that some physicians wanted to fuse the remaining pieces together, locking it in one position with metal plates for life and ending the 34-year-old&#8217;s long Air Force career.

Sustained during an October motorcycle accident, it was an injury fraught with potential for lifelong consequences. But instead of becoming a tale of woe for Gunter, his injury quickly became the centerpiece of a case study in the reach and flexibility of the American medical community in the United Kingdom.

In the effort to rebuild Gunter&#8217;s wrist, a Lakenheath doctor would first take the case all the way to Florida for ideas on reconstruction options, then call upon a longstanding relationship with a renowned English hand surgeon to complete the procedure.

It was a collaboration that culminated in an unconventional operation to save the airman&#8217;s wrist, which doctors now hope will salvage Gunter&#8217;s hand function and his career.

For Gunter, a personal property office manager with the 100th Logistics Readiness Squadron at RAF Mildenhall, things took a turn for the worse when he hit a bad patch of road in October in Beck Row, a town adjacent to the U.K. base.

&#8220;As I accelerated, it just came out from under me,&#8221; Gunter said. He was riding slowly, he said, but he tipped to the left as he fishtailed, and instinctively tried to break his fall with his hand as he went down.

The impact broke his collarbone, pinched his knee under the bike, dislocated his wrist and, most crucially, smashed some small bones at the base of the joint, said Dr. (Lt. Col.) Jeffrey Marchessault, an orthopedic surgeon at the RAF Lakenheath hospital.

Gunter received some initial treatment at a British hospital, where the option of fusing his wrist was first raised, the airman said.

&#8220;When you get right down to it, there were no real good options here,&#8221; Marchessault said. The extent of the damage was so great that doctors had very simple goals.

&#8220;What we wanted to try to do was to give him pain relief, increased motion as much as possible and strength. With a fusion you only get one out of the three: pain relief.&#8221;

Fusion &#8212; locking the wrist in one position with a plate &#8212; would likely also render Gunter unable to finish a career just three years short of retirement and rob the Air Force of his experience.

With those consequences in mind, Marchessault took his patient&#8217;s file to a conference of military orthopedic surgeons in Florida in December and sought opinions on the best way to rebuild such a badly crushed wrist.

The consultations yielded an idea for a surgery normally used on patients with rheumatoid arthritis, an uncommon procedure for such a young wrist, Marchessault said.

&#8220;These procedures were normally done in rheumatoid patients because of their soft bone, but it was felt that because of the amount of smashed bones ... this was going to be a doable option,&#8221; he said.

Marchessault had never performed the operation, however, and to make sure it went well he called on an English colleague, a trauma and orthopedic surgeon who also happens to be a former president of the British Society for Surgery of the Hand.

The surgeon, Dr. Murray Matthewson, has worked with American doctors for decades, stemming from a time when he acted as a visiting professor and surgeon at a military hospital in Texas.

He has kept up relationships with American colleagues and doctors at Lakenheath ever since, and consults occasionally on cases similar to Gunter&#8217;s, Matthewson said.

Though Matthewson didn&#8217;t pick up a scalpel in the Jan. 5 surgery, he was there to offer tips, advice and reassurance, he said. It was a gesture that was a major aid to the operation, American doctors said.

&#8220;Dr. Matthewson&#8217;s help in this case was invaluable in that the anatomy is well-known to me, [and] as a surgeon I was comfortable doing the procedure, but to have his experience and expertise was just invaluable,&#8221; Marchessault said.

It can be hard to get British doctors cleared to work in American operating theaters, he said, but Matthewson&#8217;s presence was true comfort.

Marchessault put in his own extra effort to find a workable treatment for Gunter when he took the case to the conference and brought in Matthewson to consult, said Dr. (Lt. Col.) Michael Miller, Lakenheath deputy chief of medical staff and chief of orthopedic surgery.

Though Gunter still has months to wait before he will know how strong his new wrist will be, he&#8217;s already more optimistic about its future than when wrist fusion seemed likely.

The work of the doctors, the timing of the surgeon&#8217;s conference and the aid of Matthewson have all combined to make the best of a bad situation, he said.