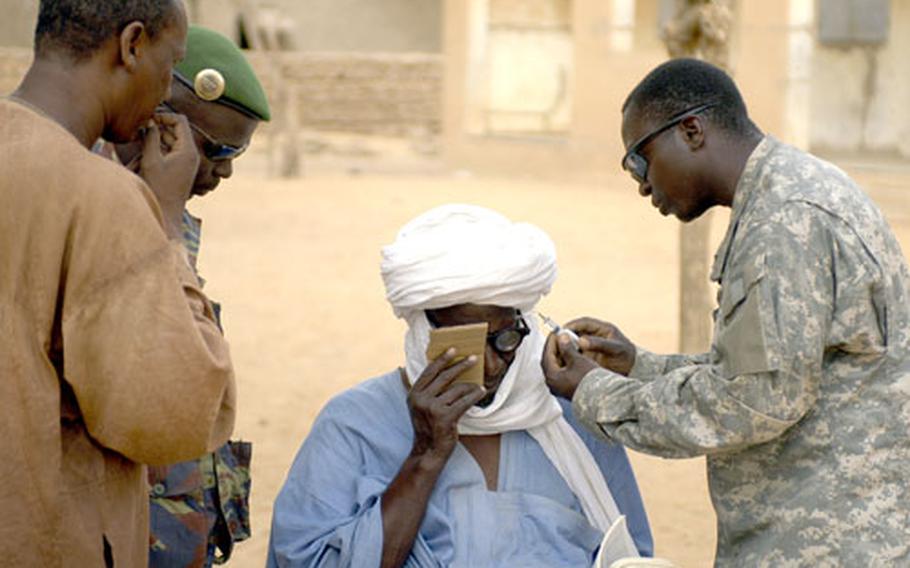 A soldier in Mali adjusts a pair of specialty glasses that allow for various prescriptions during a recent tour. (Courtesy of U.S. Air Force)

A soldier in Mali adjusts a pair of specialty glasses that allow for various prescriptions during a recent tour. (Courtesy of U.S. Air Force) 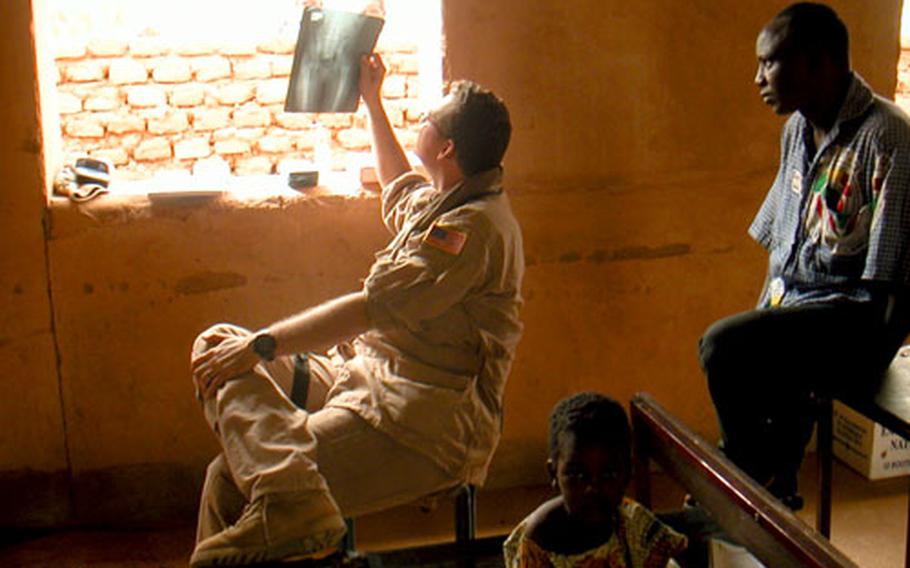 Maj. John McBeth examines an X-ray during a recent tour of Mali. The RAF Mildenhall-based physician deployed to the African country as part of a joint mission to foster ties with the military and the public in order to combat terrorism. (Courtesy of U.S. Air Force)

The Air Force physician came upon a village during his recent tour that bustled with energy and appeared healthy. But his further observations belied outward appearances.

The 36-year-old Sulphur, Okla., native was in Mali as part of the military&#8217;s newest front in its global campaign against terrorism.

Congress approved $400 million over the next two years to train and outfit foreign militaries as part of the 2007 Defense Authorization Bill, stipulating that the Pentagon allocate a percentage of the funds to deliver humanitarian aid and foster reconstruction projects.

McBeth, an RAF Mildenhall-based physician, originally deployed to Dakar, Senegal, to serve as the doctor to a contingent of roughly 100 United Kingdom-based airmen in the region on a joint mission with Army forces.

But when an Army doctor became too ill to deploy, McBeth volunteered to take over his duties. He teamed up with soldiers already in the country and traveled to villages, providing basic medical treatment.

Mali is an enormous, landlocked nation largely overrun by the vicious heat of the Sahara desert. Even in the south, where the Niger provides water for agriculture, conditions can be brutal.

While his Army comrades instructed the local military in small-arms tactics and worked on water introduction programs, McBeth&#8217;s work focused on treating kids under 12 and the elderly. The medical group also included a veterinarian and a dentist &#8212; the first dentist many of the people had ever seen.

The overwhelming poverty and lack of basic resources meant many children needed vitamins alone to improve their conditions. Vitamin A &#8212; found in green vegetables, eggs and meats &#8212; works wonders, McBeth said. He distributed it in fat-soluble capsules that stay in the body for four to six months.

&#8220;Distributing Vitamin A is the No. 1 intervention you can make for these kids. It helps boost their immune system,&#8221; the 18-year Air Force veteran said. &#8220;Measles is still prevalent here. Without a strong immune system, measles will kill.&#8221;

McBeth&#8217;s team also distributed specialty glasses that adjust the prescription by adding water inside the lens, simple enough to administer that Army noncommissioned officers helped the elderly keep more alert of the nation&#8217;s buzzing herds of mopeds and scooters.