Buy Photo
Saar, 10, eats lunch on his bed at the West Erbil Emergency Hospital on Saturday, March 11, 2017. His hands and face are blemished with fresh burns from an apparent chemical weapons attack in east Mosul earlier this month. (Chad Garland/Stars and Stripes)

Buy Photo
Saar, 10, eats lunch on his bed at the West Erbil Emergency Hospital on Saturday, March 11, 2017. His hands and face are blemished with fresh burns from an apparent chemical weapons attack in east Mosul earlier this month. (Chad Garland/Stars and Stripes) 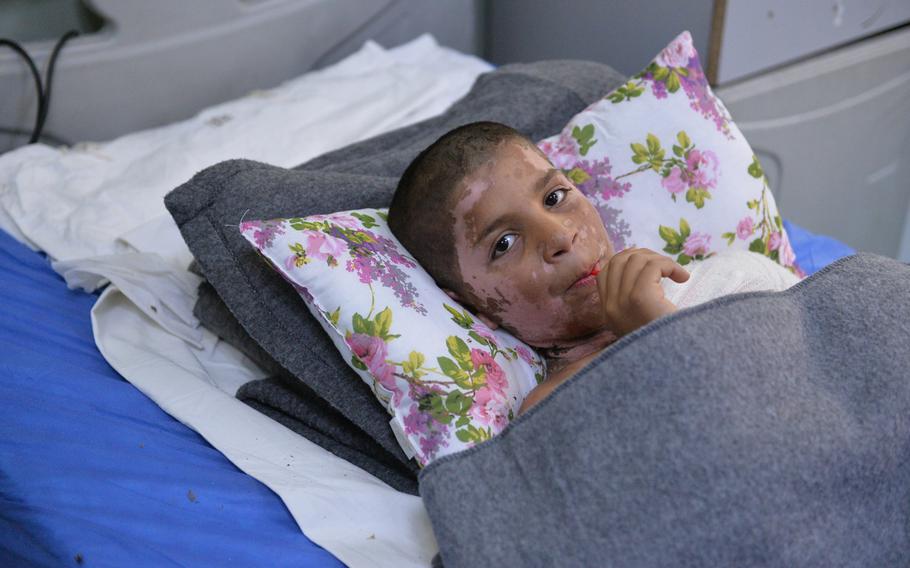 Buy Photo
Yasiv, 11, wounded in an apparent chemical attack in east Mosul in early March, recuperates in a hospital bed at an emergency hospital in Irbil, the capital of Iraq's autonomous Kurdish region, on Saturday, March 11, 2017. (Chad Garland/Stars and Stripes) Buy Photo
A photo on an Irbil hospital whiteboard above the bed of an Iraqi girl wounded in an apparent chemical attack, pictured here on Saturday, March 11, 2017, shows the girl before her face was covered with chemical burns from an apparent mustard agent. (Chad Garland/Stars and Stripes) Buy Photo
Yasiv, 11, wounded with burns from an apparent chemical attack in east Mosul in early March, recuperates in a hospital bed at an emergency hospital in Irbil on Saturday, March 11, 2017. (Chad Garland/Stars and Stripes) 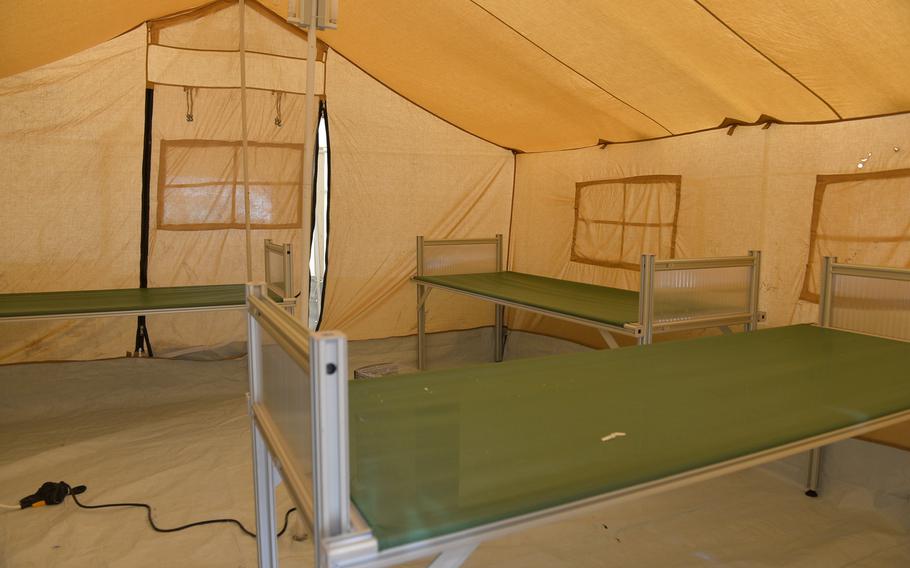 Buy Photo
Pictured here on Saturday, March 11, 2017 is the inside of one of two tents set up outside the West Erbil Emergency Hospital to handle patients exposed to chemical agents. (Chad Garland/Stars and Stripes) Buy Photo
Pictured here on Saturday, March 11, 2017, is a wash station inside a tent where patients exposed to chemical agents near Mosul can be treated outside the West Erbil Emergency Hospital. The International Committee of the Red Cross set up two such tents. (Chad Garland/Stars and Stripes) 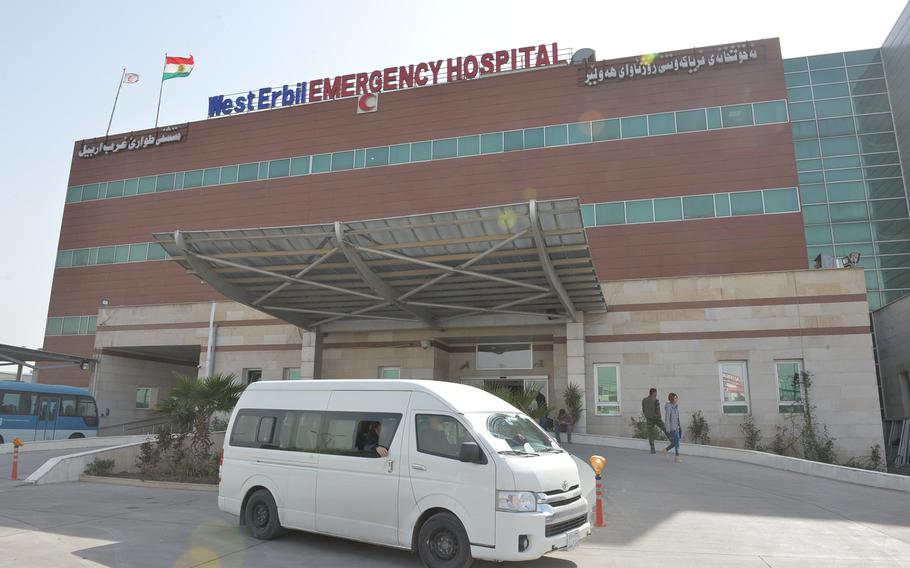 Buy Photo
Pictured here is the West Erbil Emergency Hospital on Saturday, March 11, 2017. The hospital has been treating many of the wounded from the battle for Mosul, which began in October, and in early March it received nearly a dozen patients with symptoms of exposure to chemical agents. (Chad Garland/Stars and Stripes)

MOSUL, Iraq — Bullets zipped overhead and exploded bomb debris crashed down on the metal carport roof under which a team of U.S. medical volunteers were working last week, roughly a mile from the front lines.

But the sudden arrival of an unarmed civilian also posed a serious threat, said Jeff Evans, a physician assistant from Boulder, Colo., volunteering with the group. The man, who rushed through the perimeter unannounced and largely unimpeded, had been contaminated with a chemical toxin — weaponized, in effect, against the medics and the troops protecting them.

He could have exposed the medics and others, depending on the agent, Evans said. Sulfur mustard or mustard agent, for example, can spread by contact, but Evans said it turned out the man was likely exposed to something less potent.

The incident followed allegations earlier this month that Islamic State fighters turned chemical weapons on civilians in the battle for Mosul, now in its fifth month. The United Nations has said it would be a war crime, if confirmed, but Iraq’s U.N. ambassador said last week there is no evidence to support the allegations. Medical workers, however, say they’ve seen and treated the evidence — the symptoms of about a dozen civilian patients.

“We were pretty much 100 percent sure” the symptoms were from a chemical attack, said Dr. Tony DeBari, a surgeon from Saginaw, Mich., and medical director of a Christian charity’s field hospital near Mosul. Eight civilians were treated for what he said was “pretty obvious” as exposure to something like a mustard agent.

The exposure apparently came as the result of several mortar or rocket attacks in east Mosul, which U.S.-backed Iraqi forces declared fully liberated in January after about 100 days of fighting. Intense combat continues in the half of the city west of the Tigris River, where government forces also have made significant gains.

The militants’ “last road out of Mosul” was cut off by the Iraqi army, Brett McGurck, the U.S. special envoy, told reporters Sunday. The fighters who remain will die in the city, he said. “They’re trapped.”

But, as fighting enters the older parts of the city where streets are often too narrow for armored vehicles, and troops are advancing on foot, the militants may unleash their chemical stockpile to repel them.

The Islamic State group, led by Abu Bakr al-Baghdadi, has used chemical weapons at least 52 times in Iraq and Syria since 2014, including chlorine and sulfur mustard agents, the London-based intelligence and analysis service IHS Conflict Monitor said last year. About one-third of those attacks happened around Mosul.

The Pentagon has also warned that militants would use chemical weapons in the Mosul battle. Pentagon officials confirmed last month that labs on the Mosul University campus, which was retaken from the militants in January, had been used to make mustard agent.

The first of eight civilians with symptoms of chemical exposure from the attacks arrived earlier this month at a Samaritan’s Purse emergency field hospital near eastern Mosul, giving off a telltale odor, said DeBari, the facility’s medical director. The early patients had breathing trouble and those who arrived a day later had skin blisters, a symptom of mustard agent that takes longer to develop.

Mustard agent can smell pungently of garlic, onions or mustard. The blistering agent can cause skin irritation, painful burns, respiratory problems and even decreased formation of red blood cells. It’s not usually fatal — when it was used during World War I, it killed less than five percent of those exposed, according to the Centers for Disease Control and Prevention.

The eight Mosul patients at the Samaritan’s Purse facility were decontaminated and treated or sent on to the West Erbil Emergency Hospital, a public facility built by the U.S. Army Corps of Engineers in the Kurdish region’s capital, for further treatment.

The Irbil hospital received a total of 11 patients with symptoms of chemical weapons exposure, said Avdal Wasman, a charge nurse at the hospital. At least five were children.

“When they came in, there was a very, very bad odor,” Wasman said, and there was no separate place to treat them away from other patients until the International Committee of the Red Cross, which has a partnership with the hospital, set up decontamination tents.

“You have to decontaminate (them), otherwise they will afflict the other patients,” said Iolanda Jaquemet, a spokeswoman for the ICRC in Geneva. The organization hadn’t determined what the agent was, but the medical determination was that it was a highly toxic substance, she said.

The ICRC, along with the World Health Organization, trained and equipped medical staff working in facilities near Mosul for treating people exposed to chemical weapons last year. But the attacks earlier this month were the first known incident of chemical exposure since the Mosul offensive began, Jaquemet said.

In 2016, the Irbil hospital treated a total of two patients who had been exposed to chemical agents, both Kurdish soldiers, Avdal said. Kurdish forces had accused the militants of launching chemical mortars on their defensive positions in northern Iraq.

A woman injured in the attack this month was still recovering at the Irbil hospital on Saturday, along with her children, but she declined to be interviewed, saying she was tired and her children were “very sick.”

Her 10-year-old son Saar sat atop a hospital bed eating a lunch of beans and rice from plastic dishes on a cardboard tray. The skin of his hands and face had fresh blemishes from chemical burns.

The next bed over, his sister, 11-year-old Yasiv, lay under a thick wool blanket up to her chin as she sucked on a cherry lollipop. Her hair had been shaved and her face splotched with raw pink skin, a contrast to a photograph taped to the whiteboard above her bed, which shows her with long, dark hair and flawless skin.