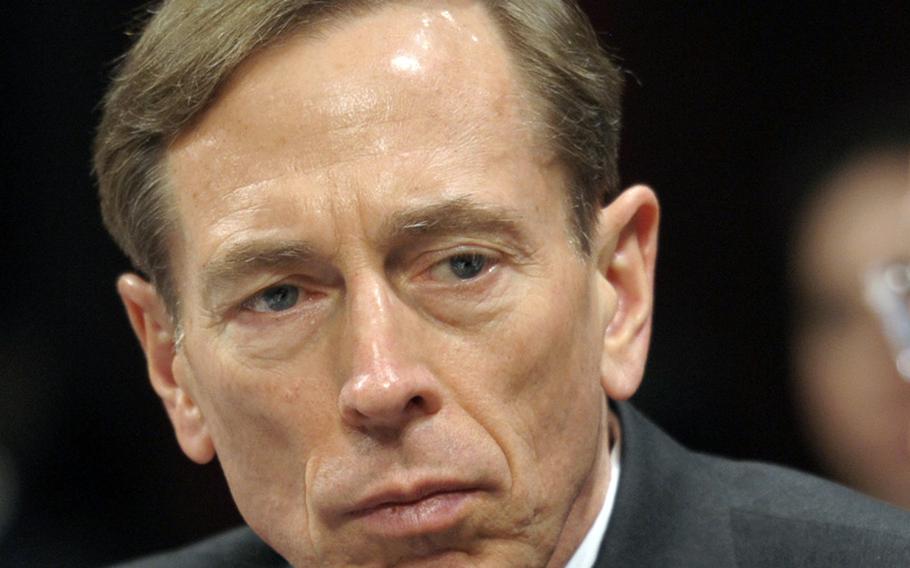 CIA Director David Petraeus testifies on Capitol Hill in Washington on Feb. 2, 2012. Petraeus has resigned because of an extramarital affair. (AP)

WASHINGTON &mdash; When hero is part of the job description, the hubris is that much worse.

No industry in America is without its share of liars, cheaters and thieves. But, when military leaders stand accused, those misdeeds are magnified because of the morals the senior officers are supposed to instill in a generation of warriors defending the nation.

&ldquo;The reason it&rsquo;s worse for a general to have an affair than the president is because this is an institution that&rsquo;s based on virtue,&rdquo; said James Carafano, a deputy director of defense studies at the conservative Heritage Institute. &ldquo;Ethics and values are never supposed to be far from troops&rsquo; minds. Failures are a deep, serious challenge.&rdquo;

David Petraeus&rsquo; adulterous affair may be ethics class curriculum for years to come, but he&rsquo;s hardly alone among high-ranking military peers in his personal missteps.

Gen. Jeffrey Sinclair, a deputy commander for the 82nd Airborne Division, is currently facing accusations of forcing subordinates into sex.

Lt. Gen Patrick O&rsquo;Reilly is being forced into retirement from his spot leading the Missile Defense Agency for childish bullying of his staff, according to an inspector general&rsquo;s investigation.

Army Col. James H. Johnson III, former commander of the 173rd Airborne Brigade Combat Team, was convicted in June of fraud and bigamy in an effort to woo an Iraqi woman 20 years his junior. Months earlier, fellow European commander Col. Avanulas Smiley was relieved because of an adulterous affair with an education assistant.

A slew of Navy officers have also been relieved of command over the last few years &mdash; at least 20 this year alone &mdash; many for &ldquo;personal misconduct.&rdquo;

The frequent headlines hint at an unsettling trend for an institution that still enjoys strong support from an American public skeptical of most government agencies.

Petraeus is known to many as an American war legend for his strategic leadership in Iraq and Afghanistan. In fact, his profile was boosted by his willingness to step in for Gen. Stanley McChrystal when he was forced to step aside from leading U.S. forces in Afghanistan after his own ethical lapses and public criticism of the White House.

On Wednesday, President Barack Obama told reporters in an East Room press conference that the nation was safer for Petraeus&rsquo; contributions in the military and with the Central Intelligence Agency, and &ldquo;I hope this [scandal] ends up being a single side note on what has been an extraordinary career.&rdquo;

Not only do Petraeus&rsquo; personal mistakes reflect poorly on that legacy, but they appear to have ensnared another top military general as well.

Gen. John Allen, the top U.S. commander in Afghanistan, has been sidelined by accusations he exchanged thousands of inappropriate emails with a Tampa socialite known to both men, a controversy which came to light in the investigation of the Petraeus affair.

No one will argue that infidelity and dishonesty are new problems for the services.

&ldquo;[Joseph] McCarthy had a mistress, [Dwight] Eisenhower was sleeping with his driver,&rdquo; said retired Army Col. Pete Mansoor, military history chair at the Ohio State University. &ldquo;These things have always happened. The difference now is the news cycle and the way news spreads.&rdquo;

Andrew Bacevich, a professor of international relations at Boston University and retired Army colonel, said he worries that the ongoing wars have &ldquo;undermined the moral moorings of very senior officers,&rdquo; who operate without much civilian oversight, expend vast resources and &ldquo;exist in an environment surrounded by people who defer to them.&rdquo;

&ldquo;The truth is just because people are wearing stars, doesn&rsquo;t mean they are immune from human frailties,&rdquo; he said. &ldquo;They are not actually different from the rest of us.&rdquo;

Mansoor, who served as Petraeus&rsquo; executive officer in Iraq in 2007-2008, said he doesn&rsquo;t believe the high-profile problems indicate a servicewide failure of self control, but they do show the need for continued ethics training throughout servicemembers&rsquo; careers.

&ldquo;Maybe one conversation, maybe just sharing some examples among general officers could dissuade some of these problems,&rdquo; he said. &ldquo;I still think some good could come out of all of this.&rdquo;

The military academies have set up entire departments devoted to ethical behavior, both on the battlefield and off. Navy and Army officials with those programs declined all comment on the Petraeus scandal.

Carafano said he doesn&rsquo;t believe that the military is suffering from a servicewide self-control problem, but said the services can still strive to be better.

&ldquo;This is a teachable moment,&rdquo; he said. &ldquo;If you&rsquo;re thinking of writing or doing something, and you don&rsquo;t want it on the front page of the New York Times, then don&rsquo;t do it.&rdquo;