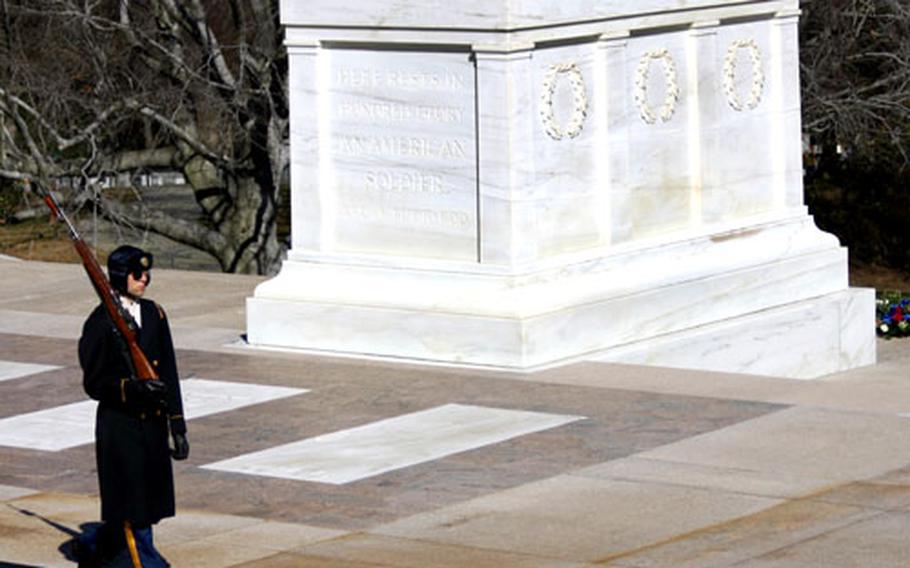 The Tomb of the Unknown Soldier at Arlington National Cemetery. (S&S file photo)

ARLINGTON, Va. &#8212; Tom Sherlock helped with the interment of a U.S. pilot killed in Vietnam in the Tomb of the Unknown Soldier at Arlington National Cemetery. Sherlock was still with the cemetery years later when he learned that pilot&#8217;s name.

In 1998, advances in DNA technology allowed the pilot to be identified as Air Force Capt. Michael J. Blassie, killed May 11, 1972, said Sherlock, the cemetery&#8217;s historian.

Blassie might be the last unknown soldier to ever be laid to rest at Arlington.

Nowadays, it takes a piece of human remains about the size of a quarter to identify U.S. troops who have been killed, said Larry Greer, a spokesman for the Pentagon&#8217;s POW/MIA office.

Greer explained that all U.S. troops have a drop of blood on file at the Armed Forces DNA Identification Library in Rockville, Md.

&#8220;The purpose of that drop of blood is if any of us in the military are killed, we wont have to go through this difficult, elaborate, long process of identifying the remains,&#8221; he said. &#8220;We simply compare the DNA that we ourselves have donated in that drop of blood.&#8221;

Scientists have used this technique to identify pilots killed in F-16 crashes, where the remains have been badly burned and fragmented, Greer said.

DNA identification is not the only scientific advance to cut down on the likelihood of unknown soldiers in the future Greer said. The military has also made advances in technology to track U.S. troops every second on the battlefield, meaning the chances of commanders losing track of their troops is &#8220;almost zero.&#8221;

Officials cautioned that no one can say for certain U.S. troops will never go missing again. Army Reserve Sgt. Keith Matthew Maupin of Batavia, Ohio, has been missing since April 9, 2004, when he was abducted by insurgents in Iraq.

One tool that gives commanders real-time information on where their soldiers are is the Blue Force Tracking system, said Timothy Rider, a spokesman at Fort Monmouth, N.J., where the Army is developing the system.

Blue Force Tracking comes in two varieties: One is terrestrial radio-based, the other satellite- based, Rider said.

The system uses small tracking devices that feed troops&#8217; positions into a digital map for commanders, he said.

Blue Force Tracking proved its merit during the initial invasion of Iraq, when it allowed commanders to know where their troops were during blinding sandstorms, when other means of tracking were useless, Rider said.

No efforts are under way to try to identify them, because the further back the soldiers were killed, the more people have to be tested to determine their identities, and finding family related to a soldier killed almost 100 years ago would be very difficult, he said.

But the family of Capt. Michael J. Blassie has some sense of resolution, Sherlock said.

&#8220;It was gratifying to me that another family could have their loved one identified, and in accordance of their wishes, he was buried near their home near St. Louis, Missouri,&#8221; Sherlock said.