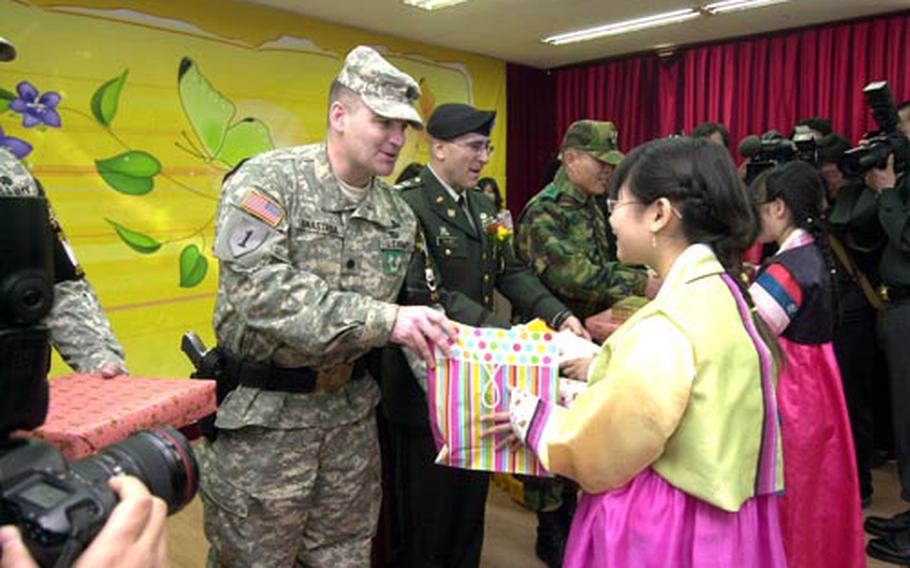 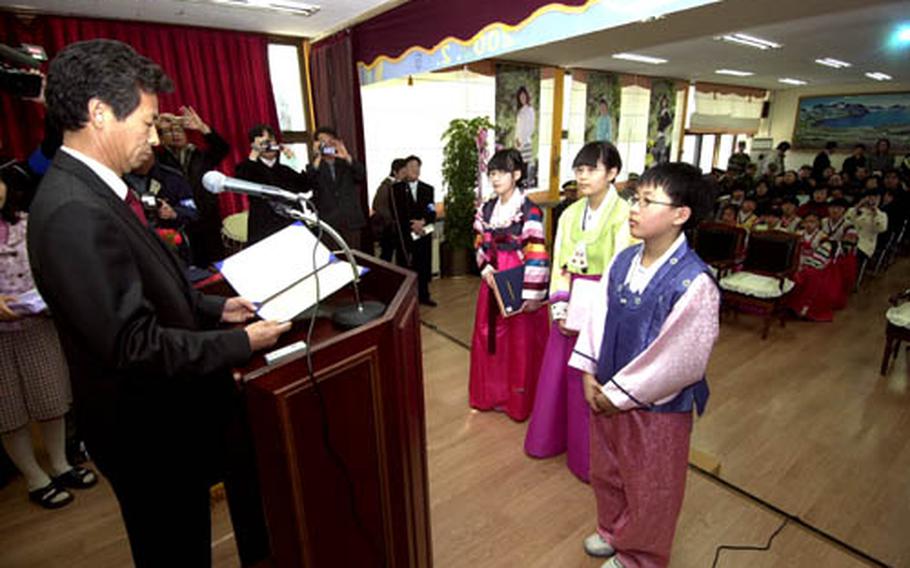 From right: Choi Jae-yeal, Jun Eun-young and Yoo Na-kyeung await the certification of graduation from the sixth grade during a ceremony Friday. The graduation cermony earns much media attention, as the students live in the only village on the southern side of the demarcation line in the demilitarized zone separating the Koreas. (T.D. Flack / S&S)

DEMILITARIZED ZONE &#8212; When you grow up a few hundred yards from North Korea, having armed guards at your elementary school graduation isn&#8217;t strange.

Neither is having the senior member of the United Nations Command&#8217;s Military Armistice Commission as your guest speaker or throngs of newspaper and television journalists capturing your every move during the 90-minute ceremony.

For the three graduating sixth-graders at the Dae Sung Dong Elementary School &#8212; Friday&#8217;s ceremony was just another day in the slightly surreal life in the only village located in the southern half of the demilitarized zone.

And living, working, playing and studying in the world&#8217;s most heavily-armed border isn&#8217;t scary, the kids told Stars and Stripes after their graduation.

When the armistice that put a halt to the Korean War was signed in 1953, a 4-kilometer wide strip spanning the width of the entire peninsula was established. Committee members agreed to allow one village to remain on each side of the demarcation line, within the boundaries of the DMZ.

Fifty-five years later, Tae Sung Dong remains, populated by 218 people, either direct descendants of the original villagers or women who have married into the village.

Residents remain in limbo, governed by the United Nations Command. Unless given a special waiver, they must spend at least 240 nights per year in the village to maintain residency. They live under a strict curfew and must be in locked homes by 11 p.m. nightly.

And they&#8217;re in constant contact with the UNC&#8217;s Joint Security Area Security Battalion, commanded by U.S. Army Lt. Col. Michael Anastasia, and are escorted when work in the fields brings them within feet of the exact border with North Korea.

They&#8217;re called refugees, and while they hold South Korean passports, they aren&#8217;t considered residents of the country. They pay no taxes, farm about 10 times more land than the average farmer and earn about $82,000 a year.

And when sixth-graders like Jun, Choi Jae-yeal and Yoo Na-kyeung graduate, they get to pick where they want to attend seventh grade. Most graduates select schools in nearby Paju or Munsan.

Choi, the only boy graduating Friday, said he understands how unique his life has been.

Yoo Na-kyeung, 12, said life in the village can be tough.

She said she was very grateful for the visitors, and the stacks of presents each student received Friday.

Hae-rym Hwang contributed to this story.