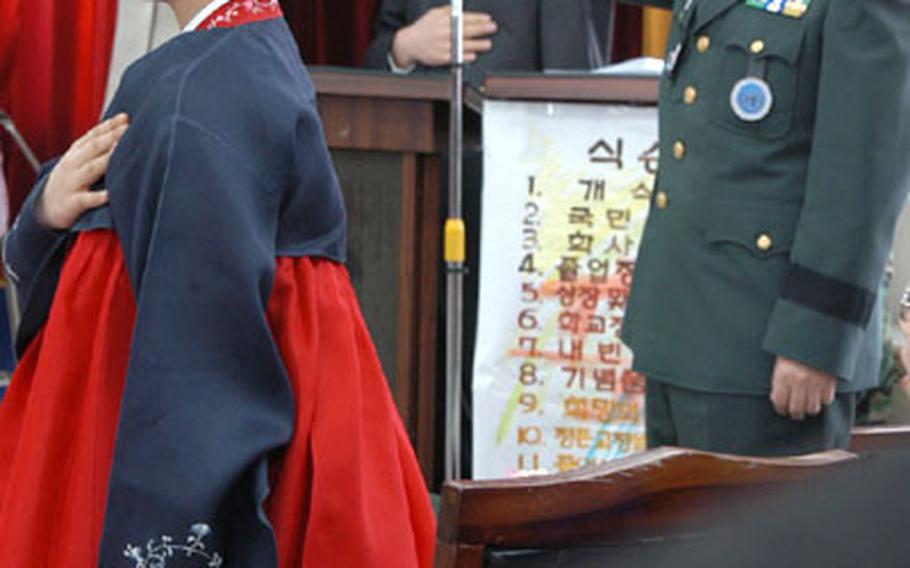 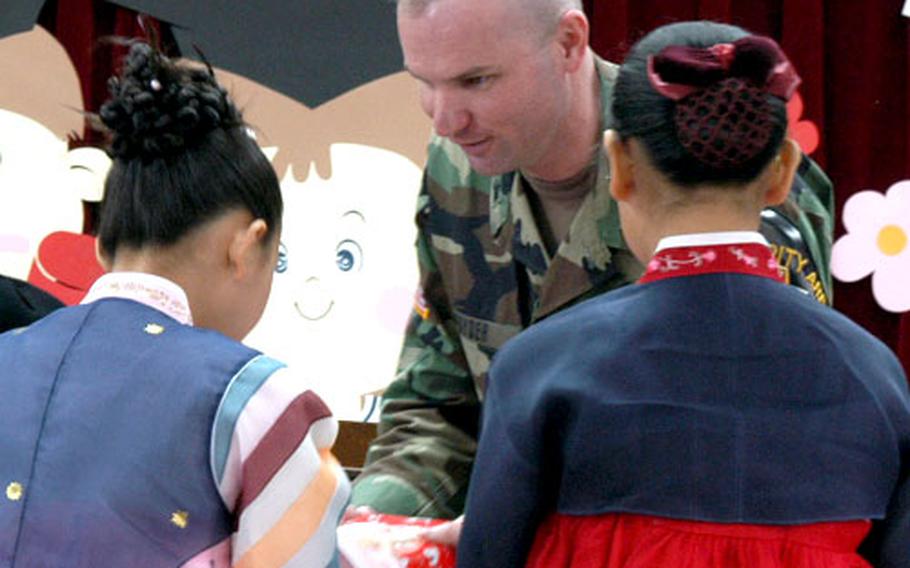 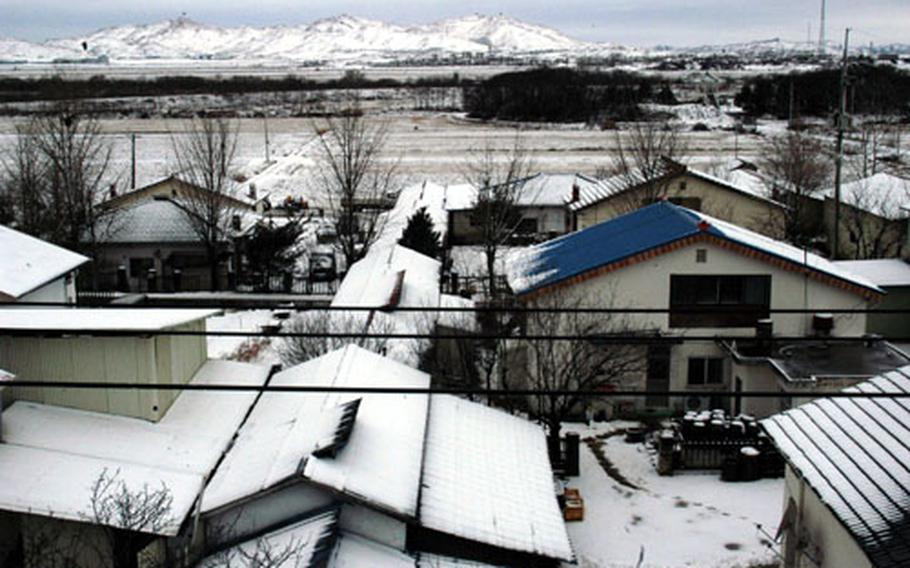 Tae Sung Dong is a village of 50 families that sits in the DMZ between North and South Korea. Below are some of the homes of the villages; in the distance are the hills of North Korea. (Teri Weaver / S&S) 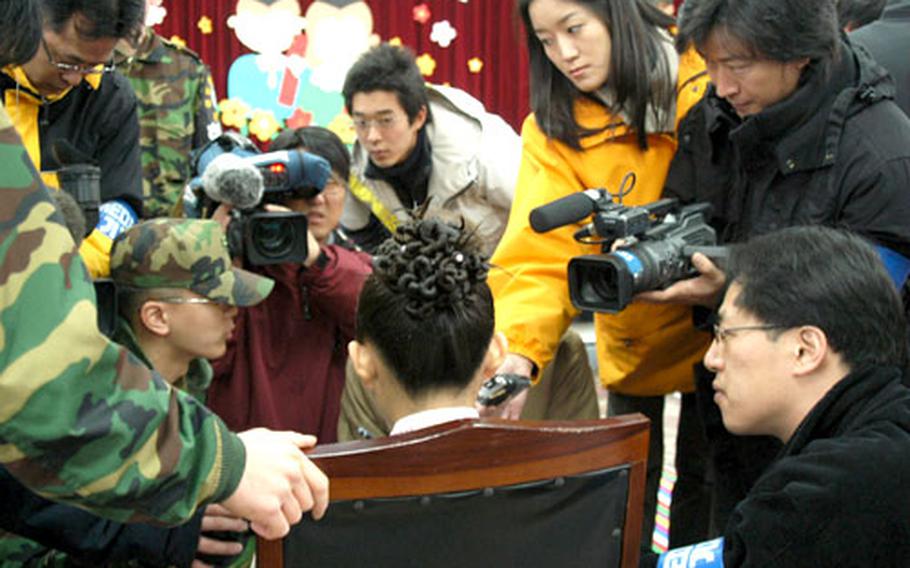 Kim Na-Young, 13, gives an interview Wednesday just before her sixth-grade graduation ceremony. Kim was one of two students to graduate this year from the Tae Sung Dong Elementary School, located in the Demilitarized Zone. (Teri Weaver / S&S) 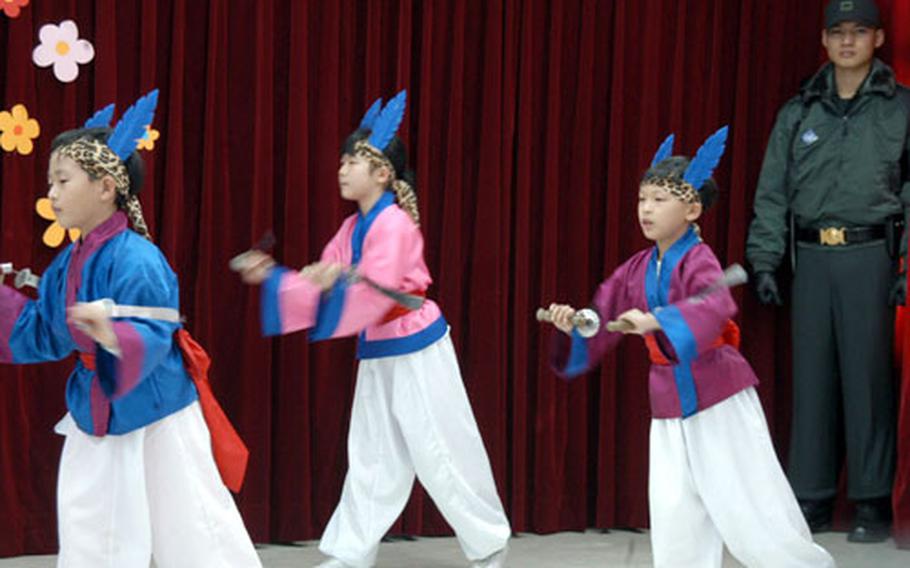 Students at the Tae Sung Dong Elementary School in the DMZ perform a dance Wednesday as part of the sixth-grade graduation ceremony. (Teri Weaver / S&S)

TAE SUNG DONG, Demilitarized Zone &#8212; For Koreans, leaving grammar school marks the beginning of adulthood and comes close to the fanfare Americans exhibit at high-school graduations, with presents, speeches and sad farewells to teachers and friends.

If that sixth-grade graduation happens in the Demilitarized Zone, it&#8217;s an event that also draws national lawmakers, military generals and more than two dozen journalists.

On Wednesday, two 13-year-old girls graduated from Tae Sung Dong Elementary School in the midst of family, friends and armed guards. The girls are among the 220 villagers who live inside the DMZ and next to Panmunjom, the truce village on the border of North and South Korea.

Tae Sung Dong is the tiny inhabited village inside that 2&#189;-mile wide zone. It contains farms, homes, a community dining room, a church, a massive Republic of Korea flag and flag pole, military outposts, a constant view of North Korea and a K-6 school.

Kim Na-Young and Jeon Hee-ryung made up the 37th graduating class from Tae Sung Dong. They had their hair swept up in elaborate buns and wore traditional Hanbok (Korean) costumes. They gave media interviews, listened to remarks from a national assemblyman and a general and received identically wrapped presents from representatives of two other nations.

Both girls received the award for perfect attendance. Their 90-minute celebration had two masters of ceremony: one who spoke Korean and the other an English speaker.

&#8220;It is something,&#8221; said Lt. Col. Paul E. Snyder, the commander of the United Nations Command&#8217;s Security Battalion, a group of U.S. and South Korean soldiers who guard the part of the DMZ where representatives from both Koreas actually sit down to meet.

Kim said the news cameras and inquisitive faces surprised her at first.

She also was asked what she thought of attending school in the midst of military guards, who enforce a 51-year-old armistice between the two countries. She said she always feels safe.

&#8220;I wish I went to school here,&#8221; Snyder added after the ceremony. As one of the U.S. representatives in the crowd, he presented both girls with Korean/English dictionaries.

Many Koreans in the crowd indicated they wish the school had more students. The grammar school has 12 students and 15 teachers, according to Capt. Lee Gun-Ho, who also works with the United Nations Command Security Battalion.

In two years, there may be no graduation. Currently, the school has no fourth-graders, Lee said.