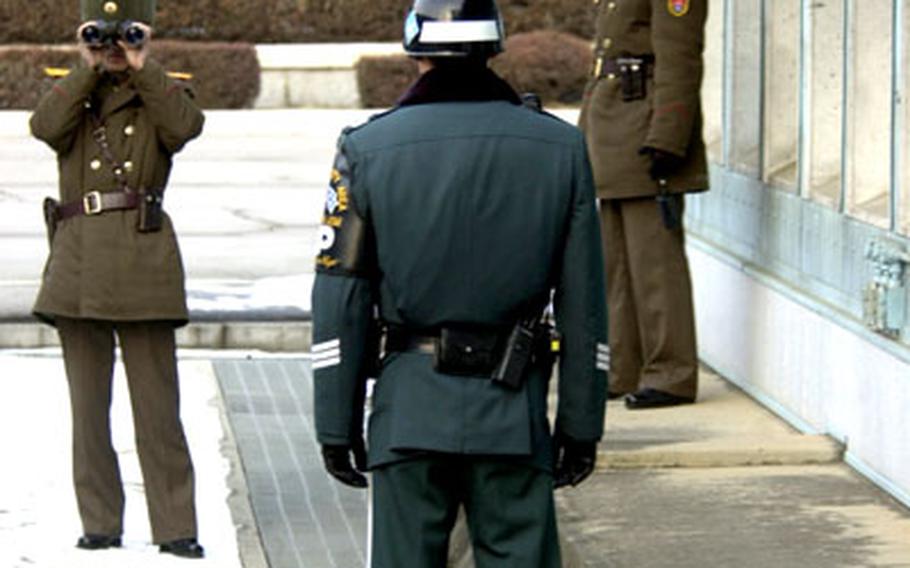 A South Korean guard stands near the demarcation line separating the Koreas while two North Korean guards keep a close eye on members of the press assembled for the historic 3,000th meeting of the Neutral Nations Supervisory Commission on Tuesday at Panmunjom. (T.D. Flack / S&S)

Swedish, Swiss and Polish delegates sat at the table straddling the demarcation line separating the Koreas.

Because North Korea hasn&#8217;t recognized the armistice since 1991 &#8212; and its Polish and Czech delegates left in 1993 and 1995, respectively &#8212; all three men entered the meeting from the South Korean side of Panmunjom on Tuesday.

The NNSC&#8217;s mission is to &#8220;supervise, observe, inspect and investigate military activities outside the Demilitarized Zone and to ensure that neither side violates the armistice by introducing or reinforcing military personnel and materiel for resumed fighting,&#8221; Theolin said during a news conference prior to the meeting late Tuesday afternoon.

Since the commission hasn&#8217;t been allowed for decades to inspect ports for any military build-up, officials admitted their presence is largely symbolic.

But they represent the &#8220;value of the international community,&#8221; Bruegger said.

&#8220;Most likely, the year of 2006 will not be remembered as a good year for reconciliation and cooperation on the peninsula,&#8221; Theolin told a gathering of journalists. &#8220;The North&#8217;s missile tests in July and the nuclear event in October cast shadows into an uncertain future.&#8221;

And decisions made in ongoing discussions on the future role of the U.N. Command &#8220;will inevitably affect also the NNSC,&#8221; Theolin said.

He declined to speculate what changes could be in store for the commission.Theolin added that the &#8220;armistice is of fundamental relevance,&#8221; that has allowed for a blossoming South Korean democracy and regional security and stability.

&#8220;It is important to recognize that although (North Korea) tries to undermine the NNSC and other institutions of the armistice, claiming that they no longer exist, North Korea continues to respect the cease-fire itself,&#8221; he said.

And in recent years commission members have been tasked with additional duties.

Theolin said they monitor the exercises to ensure they are legitimate and defensive activities that do not violate either the letter or spirit of the armistice.

&#8220;The delegations consider that these are worthwhile tasks,&#8221; he said. &#8220;We will strive to allocate our attention and most of our resources to verify and validate the United Nations Command&#8217;s compliance with the armistice agreement.&#8221;