Djibouti vandals wrecked the well, but not morale 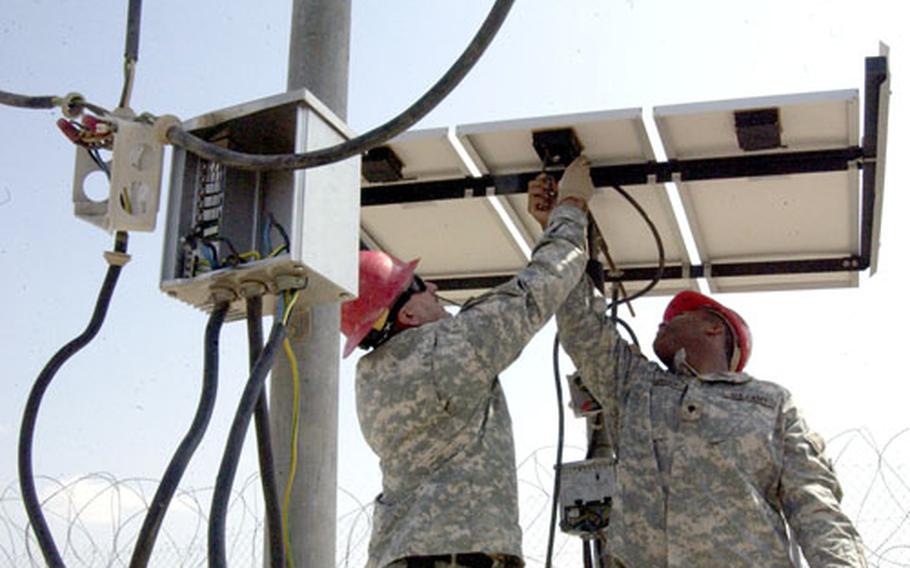 Damaged control boxes dangle from wires as Sgt. Bruce Weckman, 46, of Pratville, Ala. (right) and Spec. Alonzo Henderson, 20, of Montgomery, Ala., remove a damaged solar cell from a remote well and pumping station in Djibouti on Saturday. (Monte Morin / S&S)

Damaged control boxes dangle from wires as Sgt. Bruce Weckman, 46, of Pratville, Ala. (right) and Spec. Alonzo Henderson, 20, of Montgomery, Ala., remove a damaged solar cell from a remote well and pumping station in Djibouti on Saturday. (Monte Morin / S&S) 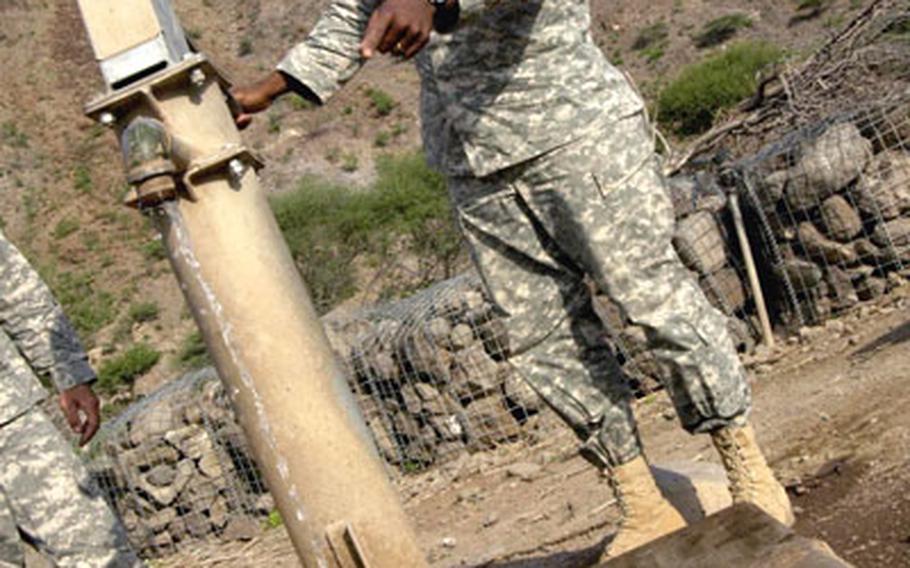 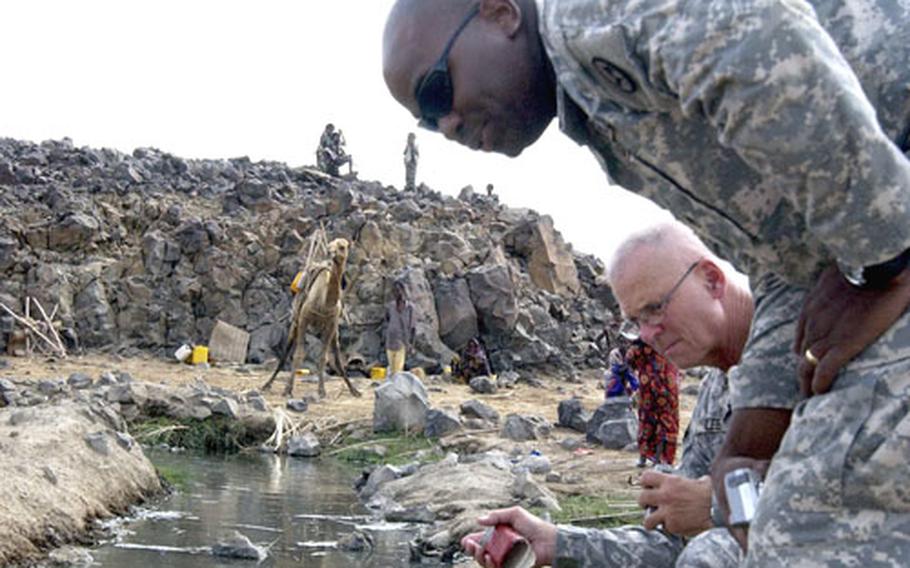 Staff Sgt. Richard Provitt, standing, and Sgt. Major William Lee inspect a spring-fed oasis near the border of Ethiopia in Djibouti as a group of nomadic tribesmen observe them from a distance Saturday. (Monte Morin / S&S) 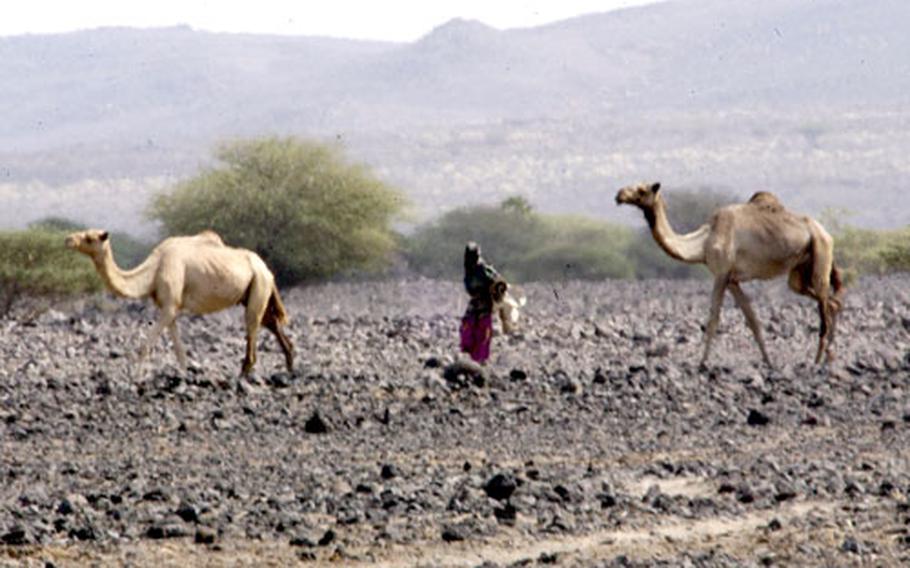 An Afar woman herds camels along an ancient pass near the Ethiopian border in Djibouti. The U.S. military installed a solar powered well nearby so that nomads could find water for themselves and their animals, but U.S. Army well drillers found the device had been torn apart on Saturday. (Monte Morin / S&S)

For almost a year, the solar-powered well had pumped a steady flow of lukewarm water from the depths of this rocky desert, the machine&#8217;s motorized solar panels twisting along with the arcing sun.

Now, however, the device was a motionless mass of hanging wires, cracked solar panels and broken chain link fencing.

Situated along an ancient camel-herding path near the border of Ethiopia, the well and pumping station was intended to be a gift of humanitarian aid to the nomadic tribes of western Djibouti.

The device was one of dozens of wells the U.S. military has drilled in the drought-stricken Horn of Africa, but one of only a few solar-powered wells &#8212; the rest are operated by simple hand pumps.

On Saturday, Provitt and his fellow Alabama-based Army reservists from the 344th Engineer Detachment set out from Camp Lemonier, in Djibouti City, on a three-hour drive to check the well site.

After driving through barren and rocky desert, past roaming packs of monkeys, loping camels and tiny gazelles, the soldiers wheeled up to the pumping station in a remote area of western Djibouti.

It didn&#8217;t take long for them to realize there was a serious problem.

Somebody had torn through the hurricane fencing that surrounds the pumping station, pried open the instrument boxes that control the solar panels&#8217; rotation and yanked out the wiring.

It looked also as if someone had tried to smash one of the energy panels and removed a key valve in the well&#8217;s storage tank as well.

As part of the Combined Joint Task Force-Horn of Africa, Provitt and his fellow well drillers are hoping to foster stability and good will by bringing clean drinking water to this parched region.

Commanders say that by providing water and other humanitarian aid &#8212; and by helping to train local government armies &#8212; the U.S. will help discourage terrorism in a fragile part of the globe.

The response from local tribesmen to the well drillers&#8217; work has been overwhelming, Provitt said.

However, the wells often require frequent upkeep or repairs, and the work keeps the 344th and Navy Seabees very busy.

The solar-powered station had been the first well that the 344th visited when it arrived in Africa more than 10 months ago.

Soldiers had made a few fixes to the machine at the time, and heard nothing more until word filtered back recently from local villages that the water had stopped flowing.

Provitt and the others anticipated a small break in the pumping rod or engine, not major vandalism.

Unlike other wells, which are either hand pumped or located in a village or near a clinic or school, the solar well was very remote. Consequently, there was little supervision of the device.

In the end, the soldiers decided to disassemble the station and truck it back to Camp Lemonier. They said that they would recommend to officers that the solar device be replaced with a hand pump.