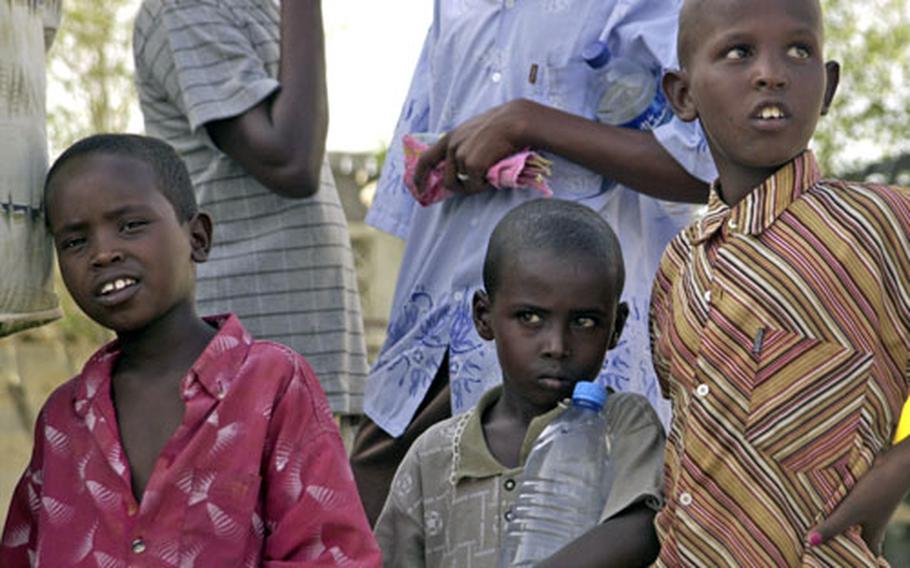 U.S. military officials say the focus of their mission in the Horn of Africa is on children, calling it is a “generational fight” to keep them from falling under the sway of fundamentalists. (Joseph Giordono / S&S)

U.S. military officials say the focus of their mission in the Horn of Africa is on children, calling it is a “generational fight” to keep them from falling under the sway of fundamentalists. (Joseph Giordono / S&S) U.S. Marines and a Djiboutian servicemember prepare to go on a security patrol in the barren land outside Camp Lemonier, headquarters of Combined Joint Task Force-Horn of Africa. (Joseph Giordono / S&S) 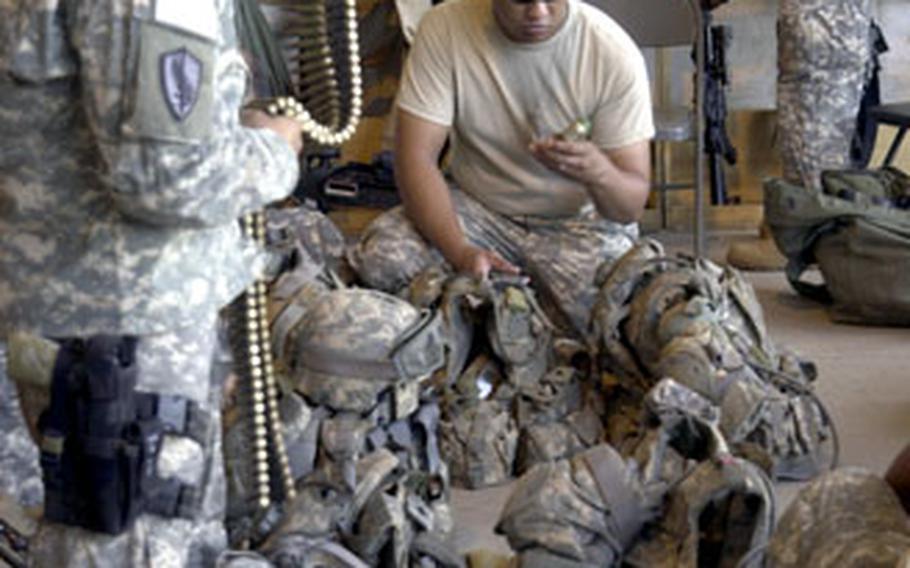 Soldiers from 1st Battalion, 294th Infantry Regiment load up their gear before going on a training mission in Djibouti. (Joseph Giordono / S&S) 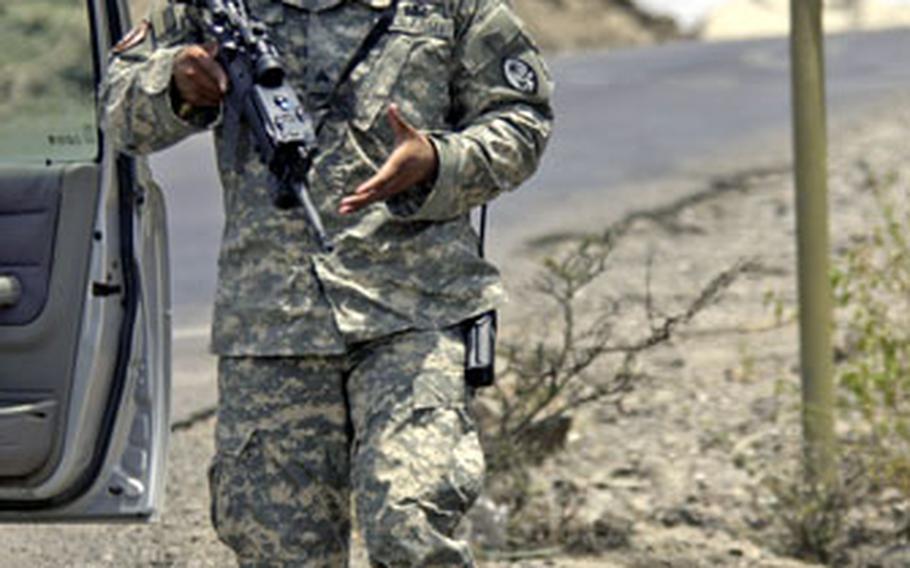 Sgt. Vincent Cruz, of the Guam-based Company C, 1st Battalion, 294th Infantry Regiment, secures the scene after a vehicle in a U.S. convoy broke down on the way to a project site. (Joseph Giordono / S&S) 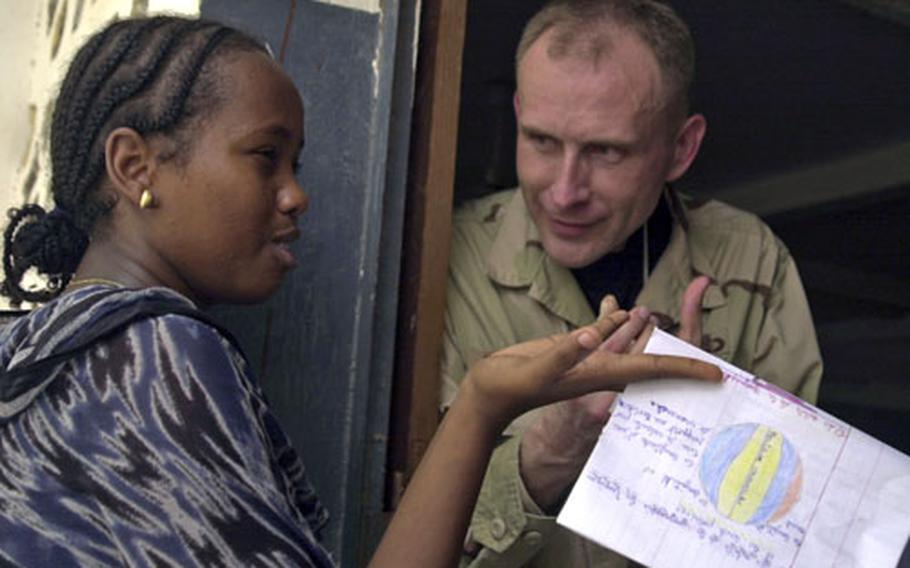 A member of the U.S. Air Force Academy Band speaks in French to one of the girls at a Djibouti city orphanage. (Joseph Giordono / S&S)

Editor&#8217;s Note: This is the first of a three-part series on the U.S.-led mission in the Horn of Africa.

DJIBOUTI, Djibouti &#8212; In a bare concrete room upstairs in an orphanage, a gaggle of pre-teen girls watch American rap videos, imitating the dances they see on a fuzzy color television hooked to a satellite dish.

A minute later, in another corner of the room, the girls proudly show off their standing metal lockers, which hold all their possessions. Some have scrawled names like Beyonce and Nelly, tributes to the images they see on the videos. One stands before her locker with the name &#8220;Oussama&#8221; scrawled on it in black marker. As in, Osama bin Laden.

She doesn&#8217;t believe the things she has heard on television, and says bin Laden is not a terrorist or killer.

The striking dichotomy of the scene &#8212; with competing cultural images beamed through a small TV to seemingly every corner of the world, no matter how poor &#8212; captures the challenges faced by the U.S.-led anti-terrorism task force in the Horn of Africa.

&#8220;Doing goodness for goodness&#8217; sake is OK, but what we&#8217;re really trying to do is ameliorate the conditions that give rise to terrorism,&#8221; says U.S. Navy Capt. Stephen Johnson, chief of staff of the Combined Joint Task Force-Horn of Africa.

&#8220;We are investing a relatively small amount of resources in order to help African nations build peace and stability throughout the region. If we&#8217;re successful, we may just be able to avoid expending the huge amounts of resources that we have in Afghanistan.&#8221;

The task force was formed in late 2002 and has operated from Camp Lemonier in Djibouti since May 2003. The force&#8217;s area of responsibility includes Djibouti, Ethiopia, Eritrea, Kenya, the Seychelles, Sudan, Yemen and, technically, Somalia.

U.S. officials in the task force go to great lengths to explain they have no operations in Somalia, where a fundamentalist Islamic movement has taken control of key cities from secular warlords. Though various reports said the U.S. backed the losing warlords, U.S. officials deny any involvement. Especially military involvement.

The task force has some 1,500 military and civilian personnel working in an area covering more than 2 million square miles with more than three times the population of Iraq and Afghanistan combined. More than half of the region&#8217;s population live in extreme poverty; there are 3.3 million refugees from war and famine; there are 10 million internally displaced persons; and 26 million people have HIV.

The mission focuses largely on children and women &#8212; &#8220;Terrorists prey on economically deprived communities and individuals in order to indoctrinate and recruit the susceptible youth and future leaders of a community. &#8230; Our actions are key to winning a &#8216;generational fight,&#8217; &#8221; the guidelines say.

Many servicemembers assigned to the task force have fought in Iraq and Afghanistan. For them, changing missions and mind-sets is particularly difficult.

The mission centers largely on four-man civil affairs teams, which dot the region and scout out potential project sites. Typically, troops are assigned to six-month tours.

&#8220;In each country, they are assessing the civil environment, working with host nation officials and tribal elders in disenfranchise areas. We find out what they need to build capacity,&#8221; said Army Maj. Michael Kelley, a civil affairs team leader deployed from Fort Bragg, N.C.

The projects are either &#8220;minimalist&#8221; &#8212; short term, low cost, sustainable by the local population &#8212; or nominated as a greater need through the task force. The larger construction projects are largely done by Navy Seabees and locally contracted labor.

&#8220;We have to be sensitive to each country. We can&#8217;t assume what works in one country works in the other,&#8221; said British army Col. Andrew Campbell, the task force deputy operations officer. &#8220;The best way to fail is to think we are masters of our own destinies. We are working through other players who have been here much longer than we have.&#8221;

In the end, while the missions are vastly different, troops in the Horn of Africa echo the words of those in Iraq and Afghanistan.