Diving into the past: Team scours a South Pacific atoll for WWII wrecks linked to MIAs 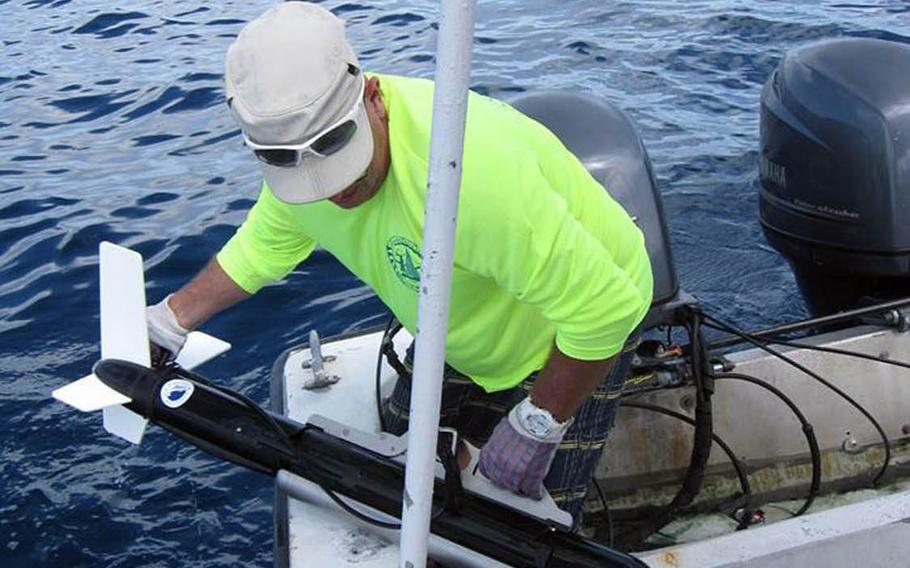 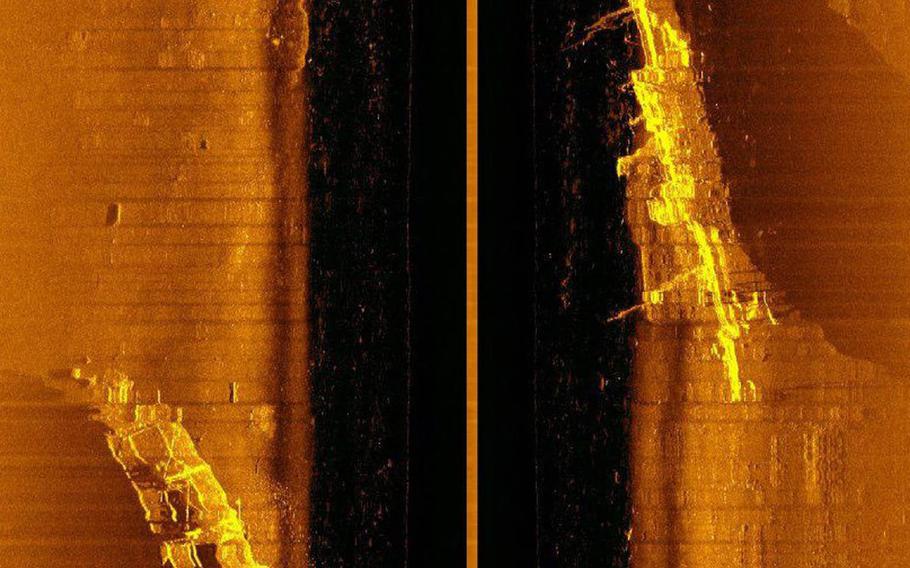 A sonar screenshot of the wreck of the Japanese freighter Tateyama Maru, which sank in Kwajalein Atoll during World War II. (Courtesy of Kwajalein MIA Project) 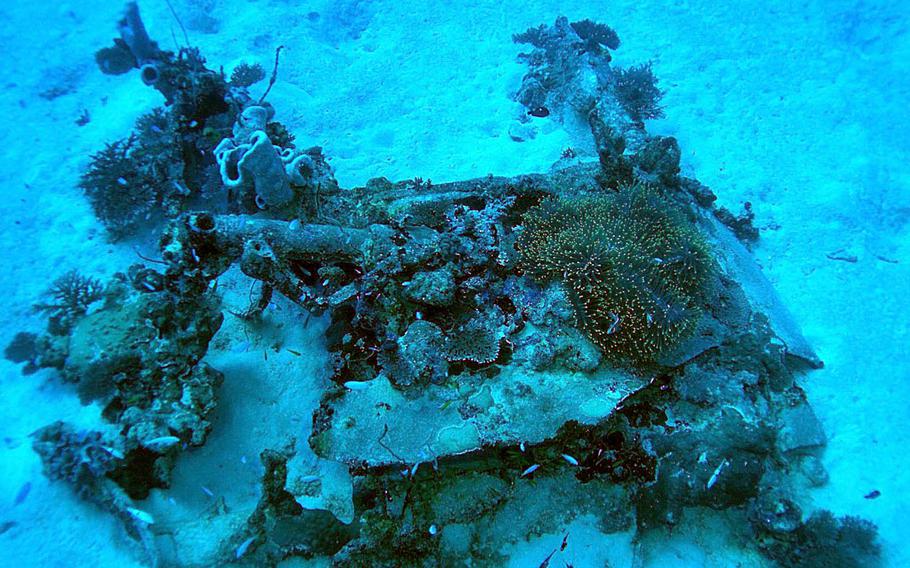 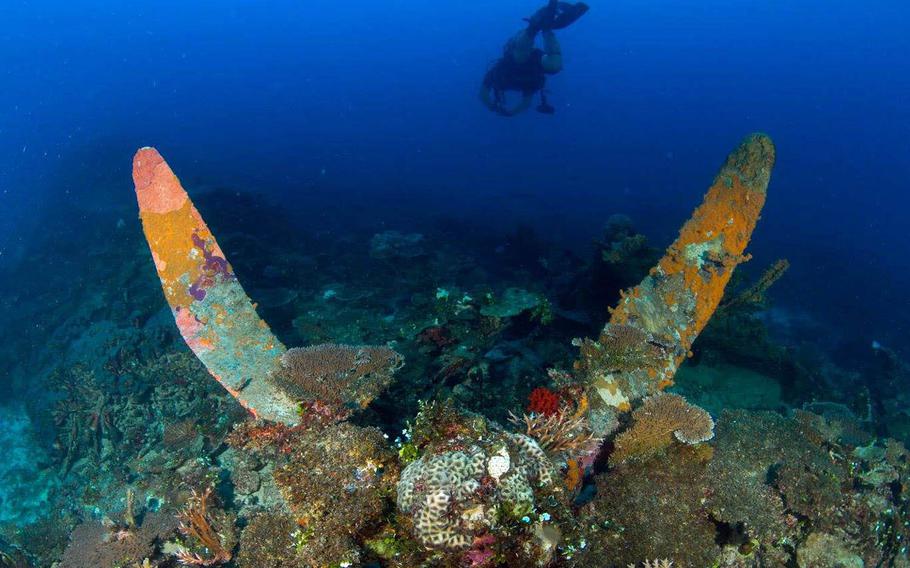 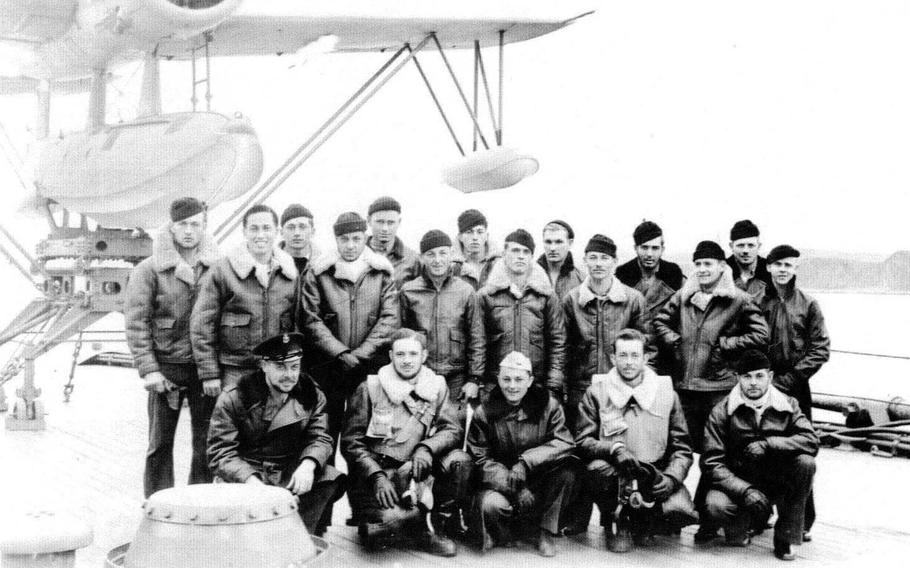 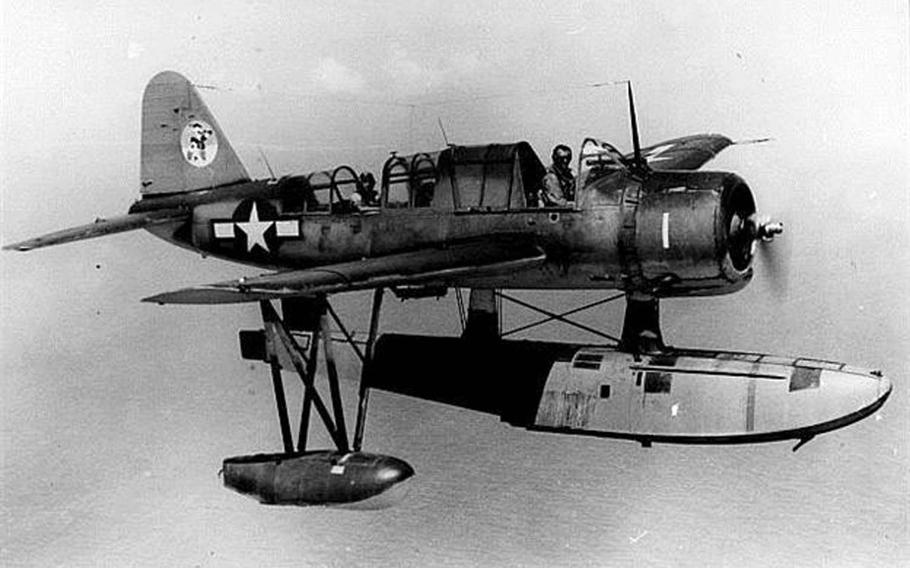 This undated photo shows a World War II-era Kingfisher scout and observation airplane similar to the one lost in Kwajalein Lagoon, Jan. 31, 1944, during the first wave of the American attack to retake the island chain from the Japanese. (Courtesy of U.S. Marine Corps) 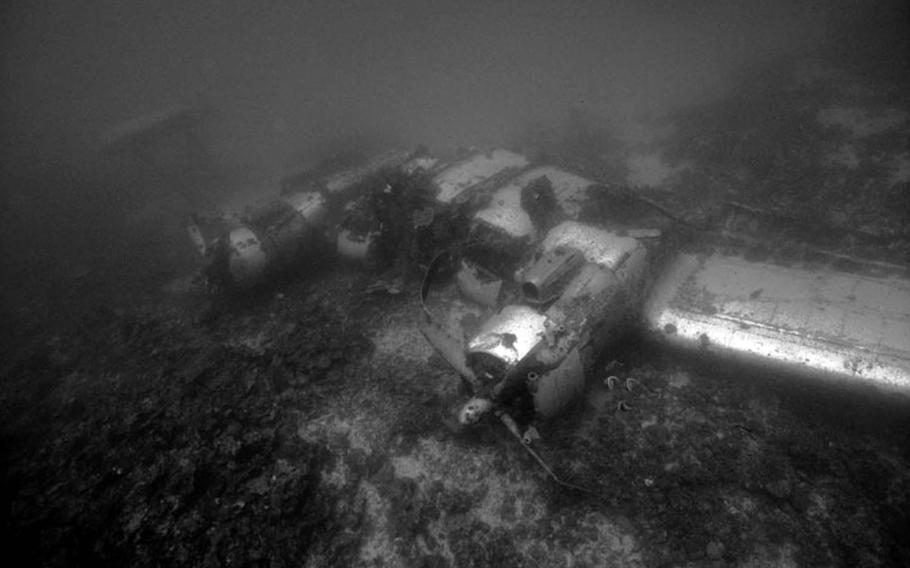 The upside-down wing section from a PBM-3D Mariner patrol bomber plane lays where it sank after plunging into Kwajalein Lagoon, Feb. 16, 1944. (Courtesy of Kwajalein MIA Project)

KWAJALEIN, Marshall Islands — The deep lagoon of Kwajalein Atoll is a graveyard for dozens of Japanese and American ships and planes that sank during World War II.

The wrecks make for some of the finest scuba diving in the Pacific. But for a small group of divers who live on this remote Army missile test base, finding ruins holding the remains of Americans killed in action has become an all-consuming passion.

“It’s a thrill beyond words,” Dan Farnham, leader of the Kwajalein MIA Project, said of the moments when the project team discovered a downed aircraft.

The 29-member team, which includes researchers who live on the U.S. mainland, has found four of the eight U.S. aircraft that crashed in the lagoon during World War II. The unaccounted-for remains of 11 MIAs are associated with those eight planes.

The project is working closely with the Defense POW/MIA Accounting Agency in Hawaii, which sent a team in August to take a closer look.

Kwajalein Atoll was the scene of a short but intense battle by U.S. soldiers, sailors and Marines in February 1944 to retake from the Japanese a strategically important chain of roughly 100 small islands. The Japanese had built airstrips on Kwajalein and Roi-Namur islands.

The best way to visualize Kwajalein Atoll is to think of a volcano jutting up thousands of feet from the ocean floor, with coral islands growing over thousands of years around the rim. The water depth within that crater — the 840-square-mile lagoon — is rarely more than 200 feet deep.

“Within our search areas, the depths run anywhere from 80 to 150 feet,” Farnham said.

They don’t dive below 130 feet for safety reasons, but that’s deep enough. “If we find a plane at 150 feet, at 20 feet above it we can know if that’s the vessel we’re looking for or not,” he said.

Farnham, who works for mission control with the Ronald Reagan Ballistic Missile Defense Test Site, came to Kwajalein on a two-year contract but is now in his 11th year on this tiny island. Diving became his main pastime.

“The people I dive with, we’re all history buffs,” he said.

A WWII rescue story Farnham first came across a reference to a plane that had gone down in the lagoon on Jan. 31, 1944. That Kingfisher float plane had been a spotter off the battleship USS New Mexico and had crashed after taking Japanese anti-aircraft fire from Ebeye Island, only a few miles from Kwajalein Island.

“So we decided, hey, let’s go look for the Kingfisher because it will be another World War II plane we can dive to, another history-related wreck,” he said.

It would become far more than that. One of his friends in the states began researching the crash, discovering that the radioman in the back seat, Harrison Miller, had been rescued from the crash by a minesweeper, and he was still alive and living in Florida.

“We had a living veteran who was in that airplane when it was shot down, tried to get the pilot out when the plane went into the lagoon, couldn’t do it, and the plane sank to the bottom with the pilot still in it,” he said.

“It took on a whole new meaning because as I was talking to this gentleman on the phone, he’s telling me about the story from 70 years ago. And it obviously still bothered him. OK, so now we’re on a mission.”

Miller died in 2014, but one of his rescuers aboard the minesweeper recalls the moment.

“He had been sitting there about six hours — or something like that — on the pontoon of the plane,” said Burl Sousa, 94, who lives in Oregon. “He was sopping wet with fuel.”

After getting Miller on board, they hooked a steel cable to the plane, which was upside down in the water. But the minesweeper was soon taking heavy fire from a nearby island, and the cable snapped when the ship raced forward.

Expanding the search The Kwajalein divers are still hunting for the elusive Kingfisher that sparked their pursuit in the first place. But their quest led the team to expand their search for all other downed planes in the lagoon with associated MIAs.

In 2009, the diving group already had found the wreck associated with one MIA — a PBM-3D Mariner, a patrol bomber plane — off the north end of Ebeye Island.

In 2011, they found an F6F-3 Hellcat fighter plane with an associated MIA pilot off Bigej Island in the central part of the atoll. That same year, they found the nose section of a Coronado patrol bomber, but not until 2016 were they able to confirm it belonged to a plane that listed one crewmember and one passenger MIA.

In 2015, they found the back half of another Coronado, which had split during a hard landing in the lagoon in August 1944.

The halves had floated for at least a half-hour before sinking, but rescuers were unable to retrieve the body of one person assumed to be in the front half. Project divers are still searching for that half.

For all their love of diving, most of their searching starts out standing aboard a small boat dragging a sonar behind, “like mowing a lawn,” Farnham said. Each sweep covers about an 800-foot swath.

With the borrowed sonar that they used up until last fall, they traveled about 3 mph during the search. A new sonar recently purchased by the project will allow them to move a bit faster, with vastly better imaging, he said. The waters are generally calm enough to sonar search only between May and October.

“So even if it’s in pieces, it might take a while to identify it, but usually within a day or so at the most we’re going to know exactly what we’ve got,” Farnham said.

“When we find a wreck, we keep the GPS coordinates a strictly guarded secret because we don’t want tourism diving on the spots,” he said. “We only dive long enough to get photos and video that we need to verify what we found, and then we stay away from it. That keeps the site in pristine condition until the DPAA team can come in and do their part.”

Farnham is confident that human remains could still be in the planes, even after 70-plus years in warm Pacific salt water.

He believes so after diving several times in Chuuk Lagoon in Micronesia, which holds more than 40 Japanese ships sunk during World War II. Swimming through the ships, he looked into compartments and saw numerous human bones — skulls, leg bones, jaws — after all this time.

The project is in contact with the next of kin for all but two of the 11 MIAs in the lagoon. Two of them are sons of the MIAs who “have memories of sitting on their fathers’ knees,” Farnham said.

The team assembles all the information it has on a missing family member and the circumstances of the death, then delivers it to the surviving kin they locate.

“We see what an effect it has on the families when we pass this information on to them,” he said. “It makes it that much more profound for us, and it drives our determination even more to go find the rest of these airplanes.”