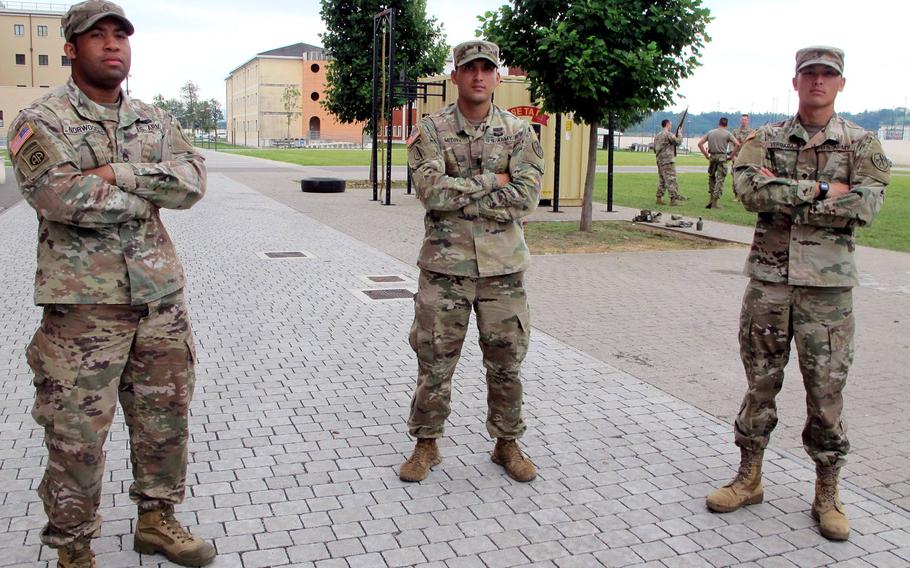 VICENZA, Italy — An Arabic linguist, an infantryman and an officer who came up from the enlisted ranks will compete for U.S. Army Africa with soldiers from throughout Europe in the service’s Best Warrior competition.

Spc. Christian Vergara, Staff Sgt. Tyree Norwood and 1st Lt. Teddy Medina will be ruck-marching, providing first aid, performing fitness tests, answering questions from a board of sergeants major and demonstrating other military skills along with troops from some 15 U.S. Army Europe units at the six-day competition beginning Saturday in Hohenfels, Germany.

The three are exceptionally enthusiastic soldiers, although they did not come from military families or initially plan to join.

“I consider my career just one big stroke of luck,” said Vergara, 22, an Army linguist who met his wife on the first day of training at the Defense Language Institute. Before enlisting, he spent a year at the University of California, Berkeley studying business economics. A reduction in his financial aid changed his plans.

“A lot of my friends can’t understand why I joined and why I love the military,” he said. “It’s a little sad because I wish they could just see.”

Norwood’s parents suggested he join the family trucking company in Houston, but it just wasn’t for him. Physical training, deploying in war zones and camaraderie was.

Medina, 29, figured he’d be a firefighter or a mailman. But after he was told he needed an elective and that it couldn’t be another gym class, he joined his Colorado high school’s junior ROTC program and was profoundly impressed by the bearing of an “awesome” first sergeant.

Years after he’d enlisted, another mentor told him, “Sgt. Medina, you should try the officer realm. I believe in you.”

The three are also examples of the growing racial and ethnic diversity of the armed forces. In 2004, 36% of active-duty military personnel were Black, Hispanic, Asian or another minority group, according to the Pew Research Center. By 2017, that percentage had grown to 43%.

“I’m proud to be Guamanian and Filipino,” Vergara said. “I think what makes our Army so great is we really are a melting pot. Having pride in that, we actually have a reason to celebrate.”

The winners will move on to the Army-wide competition in the United States.