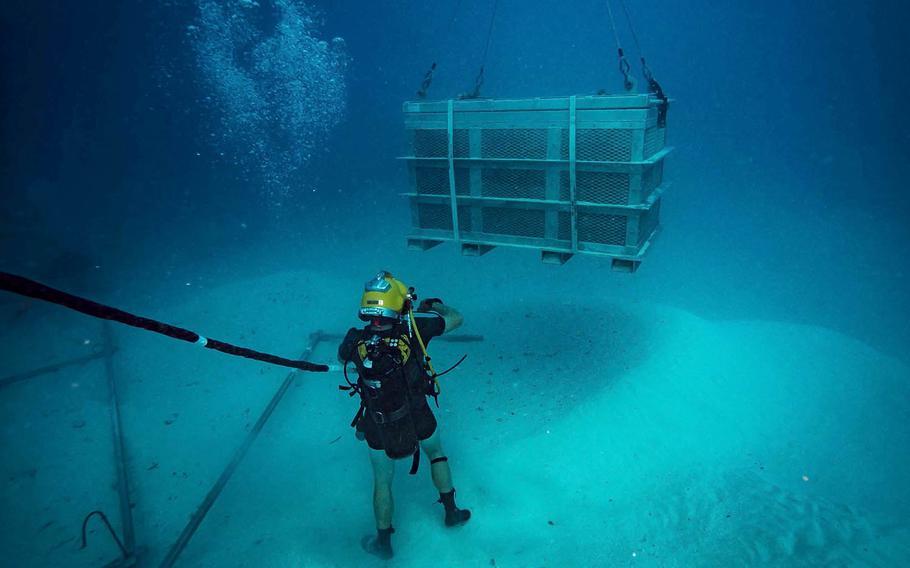 Headed by the Defense POW/MIA Accounting Agency, the team worked from aboard the USNS Salvor near Ngerekebesang Island, completing work on Feb. 25.

Divers worked seven days a week, often 12 hours a day, in search of remains belonging to servicemembers shot down in aircraft in 1944, the Navy said.

The underwater recovery team spent much of that time excavating the area using archeological tools and painstakingly inspecting the bottom sediment, the Navy said.

The remains will be analyzed by DPAA. If any positively match missing servicemembers associated with the crash site, the nearest next of kin will be notified. The names will be released to the public after that point.

“The biggest advantage the Navy has with us on the Salvor is that we are standing by for them with a decompression chamber on board for divers, and we have heavy-lift capability,” Capt. Mike Flanagan, a civilian mariner and master of the Salvor, said in the statement.

It’s a robust ship sporting a 40-ton-lift crane for lifting heavy objects from the ocean floor, he said.

The recovery team boarded the Salvor in Guam, then picked up DPAA personnel in Palau.

“We did a four-point moor on top of the aircraft and then it really got busy,” Flanagan said of one recovery site. “The aircraft had been untouched for about 74 years.”

The team used 4-by-8-foot baskets for sifting sand in the hunt for remains. The baskets were dropped about 90 feet to the ocean floor and then filled with sediment that was spread over a large area around the wreckage.

It took roughly five hours to sift through a filled basket, the Navy said.

Ngerekebesang Island was the site of a Japanese submarine base and seaplane ramp during World War II. It was the target of numerous B-24 bombing raids by the United States in 1944-45.