The diver propulsion device is designed to get Marine divers to the shore faster and with less effort than swimming in with fins. The 165-pound DPD can propel divers at speeds up to one knot. (Cindy Fisher / S&S)

The diver propulsion device is designed to get Marine divers to the shore faster and with less effort than swimming in with fins. The 165-pound DPD can propel divers at speeds up to one knot. (Cindy Fisher / S&S) Sgt. Michael Black, left, 21, from Philadelphia, and Cpl. John Chapmen, 22, from Seattle, both with 3rd Reconnaissance Battalion, carry a diver propulsion device into the water at Splash Beach on Camp Schwab, Okinawa, on Wednesday. It was the second day of a four-day familiarization course. (Cindy Fisher / S&S) 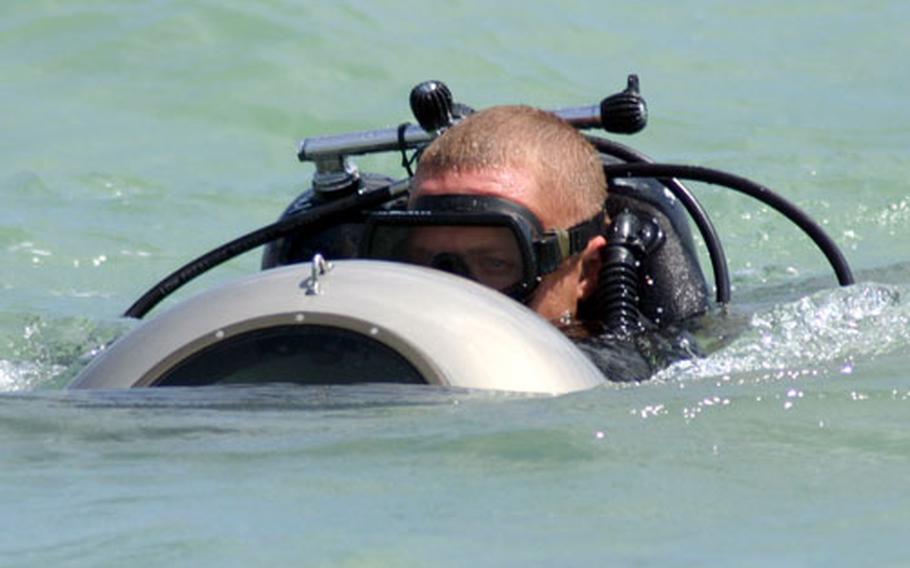 A Marine with 3rd Reconnaissance Battalion rides a DPD through the waves at Splash Beach. (Cindy Fisher / S&S) CAMP SCHWAB, Okinawa &#8212; The Marine dive supervisor meticulously outlines the plan to the recon divers and what to do if something goes wrong.

Communicating with your dive buddy is key, and watch out for boats on the surface and coral lining the water&#8217;s bottom, the supervisor warns.

The troops will be diving in 30-feet-deep water with unfamiliar equipment &#8212; a diver propulsion device.

Quickly and efficiently, they recheck dive apparatus and then clamber aboard Zodiac boats.

At Splash Beach on Camp Schwab, two-man teams, already loaded down with dive tanks and breathing apparatus, struggle to carry the two bulky, 165-pound, torpedo-shaped tubes into the choppy surf.

They carefully pile into the narrow confines of the tube. It&#8217;s so compact that the Marines lay one atop the other &#8212; one along the bottom of the tube, where he can peer out of a small window through the murky waters, and the other at his back. All the while, they are fighting the surf that pushes the ungainly tube in every direction.

But everything comes together, and the team speeds through the water, quickly making it from one checkpoint to the next.

The Marines were in the second day Wednesday of a four-day course to familiarize them with the diver propulsion device, a recent addition to the reconnaissance arsenal.

The unit received the DPDs in 2005 and run the course about four times a year to get recon troops up to speed with them, Davila said.

On Wednesday, the Marines took two DPDs out for two 500-yard underwater runs without combat gear and two with combat gear. During the runs, they also switched drivers underwater.

He was impressed with the speed, though.

Sgt. Michael Black said that although it was a little cumbersome trying to make the device go where they wanted, &#8220;It was pretty cool.&#8221;