District hopes to build on drop in violence 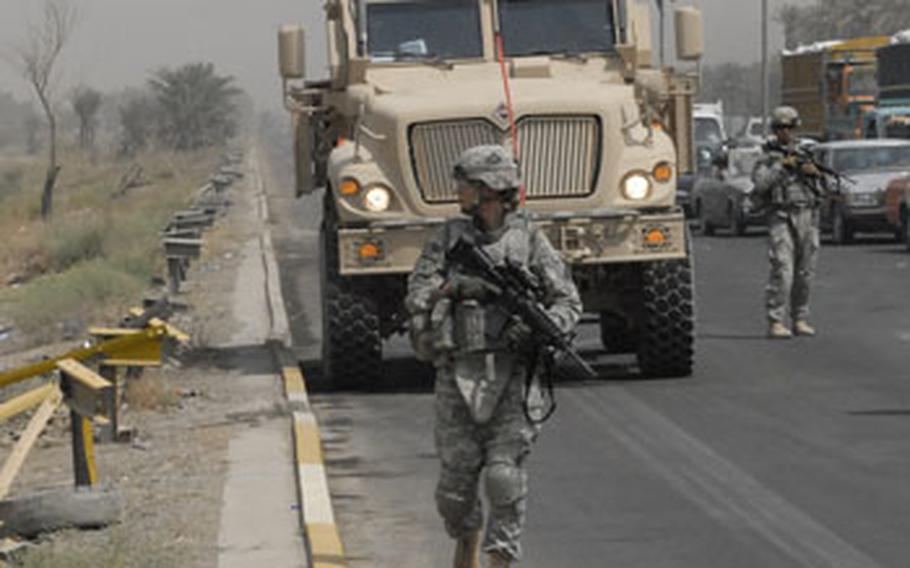 Cpl. Rebecca Baxter, a medic with Headquarters and Headquarters Company of the 1st Brigade Combat Team, 4th Infantry Division, scans the fields along the busy Dora Highway during a patrol mission last month. U.S. troops regularly patrol most of the district every day, despite far fewer security incidents than a year ago. (Photo by Leo Shane III/S&S)

Cpl. Rebecca Baxter, a medic with Headquarters and Headquarters Company of the 1st Brigade Combat Team, 4th Infantry Division, scans the fields along the busy Dora Highway during a patrol mission last month. U.S. troops regularly patrol most of the district every day, despite far fewer security incidents than a year ago. (Photo by Leo Shane III/S&S) Sgt. Craig Walker and his dog, Carla, search for a weapons cache at a farm on the eastern edge of Baghdad’s Rashid District last month. The tip, which came from a member of the "Sons of Iraq," turned out to be false. (Photo by Leo Shane III/S&S)

BAGHDAD &#8212; The Abu D&#8217;shir neighborhood is much safer than just a few months ago, the national policeman told U.S. troops visiting his home Saturday.

Attacks on police forces are down. Fighting between religious sects has stopped, too. More businesses are opening up. Kids are playing in the streets. The man&#8217;s neighbors have started eating out at local restaurants.

But still, the man was hesitant to give his name to the troops from 7th Squadron, 10th Cavalry. And he said he won&#8217;t walk down his street wearing a police uniform because "people are still watching."

U.S. forces in this neighborhood &#8212; and throughout Baghdad&#8217;s Rashid District &#8212; say that&#8217;s the challenge they&#8217;re facing right now: trying to root out the remaining insurgent elements in the neighborhood to prevent a return to the violence this area saw just a short time ago.

"At one point, before the surge, one battalion had this whole area, and things got bad," said Lt. Col. Tim Watson, head of the 2nd Battalion, 4th Infantry Division, which oversees the district&#8217;s northeast section. "We went up to four battalions and then some. And as things calmed down, we&#8217;ve come back down to one battalion.

"The national police and coalition forces are both working now with the local residents. There really was a change. But I can&#8217;t say we have irreversible momentum here."

Attacks on coalition troops in the district, located in the southeast corner of Baghdad, are down sharply in the last 12 months. In summer 2007, insurgents averaged nearly 30 attacks a day against convoys, outposts and other military targets. This summer, they averaged about one a day.

In fact, no U.S. troops have been killed in the Rashid District since May 1, when two of Watson&#8217;s soldiers were killed by a roadside bomb.

Officials here credit a number of factors for the sizable drop in violence: last year&#8217;s "surge" of U.S. troops; the cease-fire by Shiite cleric Muqtada al-Sadr earlier this year; the emergence of the "Sons of Iraq," an armed civilian group which helped secure areas inaccessible to government forces; better training of national police and Iraqi soldiers.

But U.S troops on the ground here said just as important has been the response from local residents.

"Everyone talks about the insurgents and [al-Qaida], but I think everyone forgets that other Iraqis have a say too," said Lt. Col. Dave Hill, commander of the 1st Special Troops Battalion, 1st Brigade. "They&#8217;ve seen visible improvement here. They know they have a choice."

Capt. Chris Howell, commander of 7-10&#8217;s Comanche Troop for the last six months, said locals have been more friendly and trusting of U.S. troops than in the past, telling them they believe the coalition can bring stability.

Just north of his sector, in the Dora neighborhood patrolled by Company A, 2nd Battalion, 4th Infantry Division, streets previously full of vacant storefronts are now seeing new shops open daily, often after coalition forces give a nearby owner a business expansion grant.

In nearly every sector of the district, a handful of families ask the neighborhood council for permission to resettle the homes they abandoned during the years of fighting.

"It&#8217;s a sign that they think everything is getting better, and they want to come home," said 1st Lt. Michael Garlining, of 1st Battalion, 22nd Infantry Regiment.

But both the residents and security forces acknowledge the security situation isn&#8217;t perfect.

On a recent patrol through the As&#8217;ia neighborhood, members of the 7-10&#8217;s Troop B were surprised to find a widow living in a home with two other men, who claimed to be her brothers. Both had suspicious paperwork and could not provide information about their employers, even though they said they were helping their sister with rent.

"They&#8217;re probably al-Qaida," said Mike Sovey, a law enforcement professional working with the military, as they left the home. "We know they&#8217;re in the area, but people are afraid to talk about it. So we&#8217;ll keep an eye on them"

U.S. forces are still tracking a few dozen members of insurgent groups, Mahdi Army and al-Qaida in the district. Often the militants can still move quietly through the neighborhoods, undetectable as long as they don&#8217;t openly confront security forces.

"We found a weapons cache right across from an Iraqi army checkpoint near FOB Falcon," said Sgt. 1st Class Carmen Centennial. "It was new stuff. It had to have been put there recently. And the Iraqi soldiers right across the street didn&#8217;t see anything."

Bombs are still being found on major highways in the district, although they are smaller and much less frequent than in the past.

U.S. forces recently uncovered two weapons caches in a vacant home near the Dora market, where local teens were rumored to be forming an anti-coalition gang. Most units still keep a 24-hour presence in their neighborhood, trying to provide a deterrent to would-be criminals.

Capt. Seannery Tennimon, incoming commander of the 7-10&#8217;s Troop C, said that unit has had indirect contact with old members of the Mahdi Army, ones who committed minor crimes but know the whereabouts of major cell leaders.

So far none have surrendered. But Tennimon is confident they&#8217;re getting close with one of them, a breakthrough which could pull in others.

Eventually all those tasks will be turned over to Iraqi forces, Watson said. But for now, U.S. commanders in Rashid are content with joint patrols and operations, putting an Iraqi face on much of the coalition effort.

"I&#8217;m very optimistic," said Lt. Col Chris Taylor, Fire Support Officer for the 1st Brigade Combat Team. "Right now we can only call it a lull in violence. But residents are gaining confidence that it&#8217;s more, and that the attacks won&#8217;t come back."

The national policeman talking to troops on Saturday eventually gave them his name, under the promise of confidentiality. He criticized the Abu D&#8217;shir council for not doing enough, and accused some members of being linked to insurgents. Centennial, one of the U.S. troops present, told him to start a petition drive to force those officials out and get honest politicians to clean up the sector.

But the policeman just laughed.

"That will work," he said through a translator, "when I&#8217;m able to wear my uniform out on the street here."