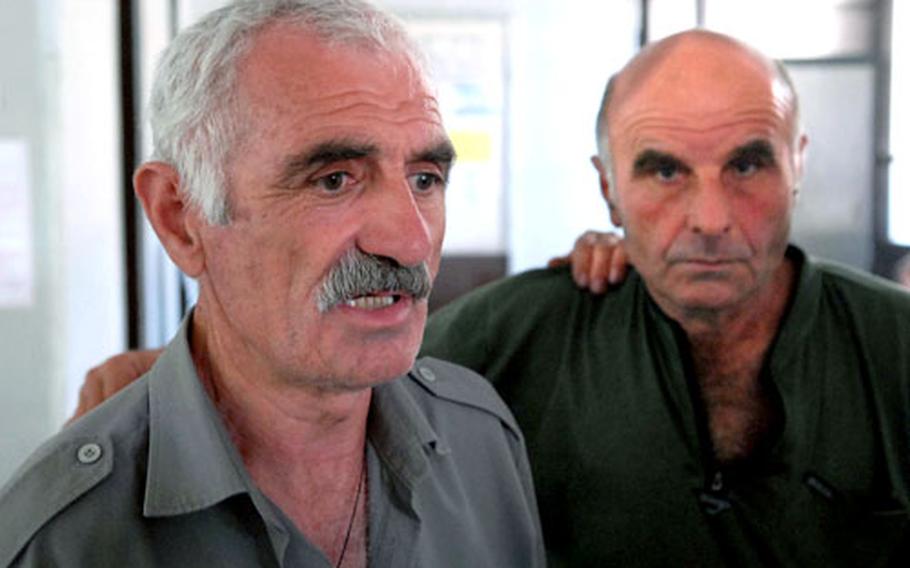 Bezan Ksovreli, right, listens as Givi Razmadze talks about how they are faring at a displaced persons center housed in a public school in Tbilisi. (Michael Abrams / S&S)

Bezan Ksovreli, right, listens as Givi Razmadze talks about how they are faring at a displaced persons center housed in a public school in Tbilisi. (Michael Abrams / S&S) 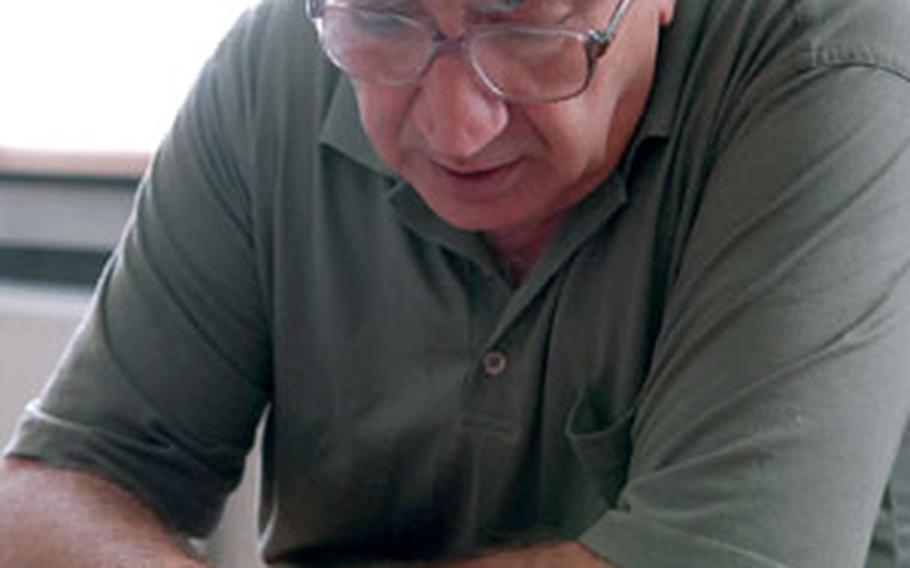 Misha Mindadze, director of Public School No. 161 in Tbilisi, reviews how many displaced persons he has staying at the school. (Michael Abrams / S&S) 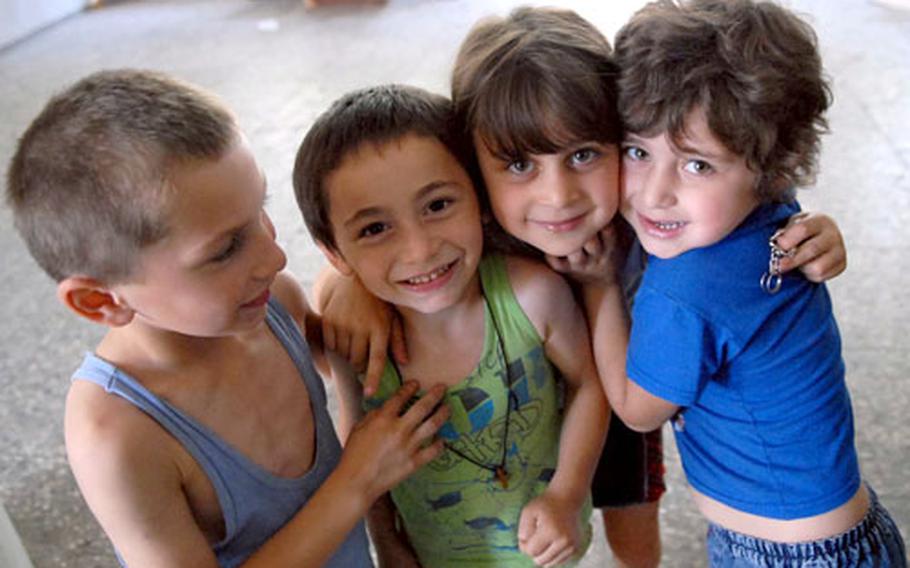 While their situation might not be rosy, children at a displaced persons&#39; center in Tbilisi, Georgia, spend their time playing and posing with their friends. (Michael Abrams / S&S) 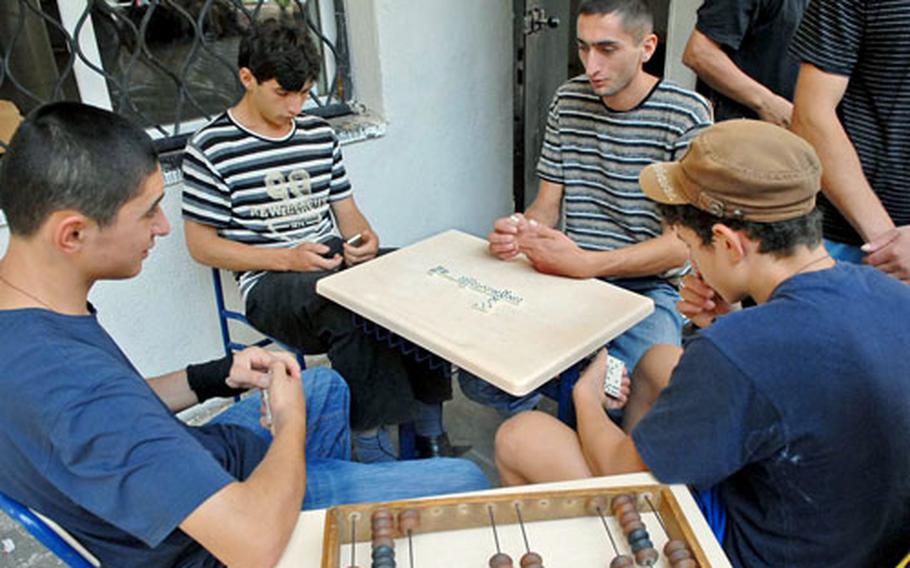 Without much to do at a displaced persons&#39; center in Tbilisi, young men spend their time watching television and playing board games. (Michael Abrams / S&S) 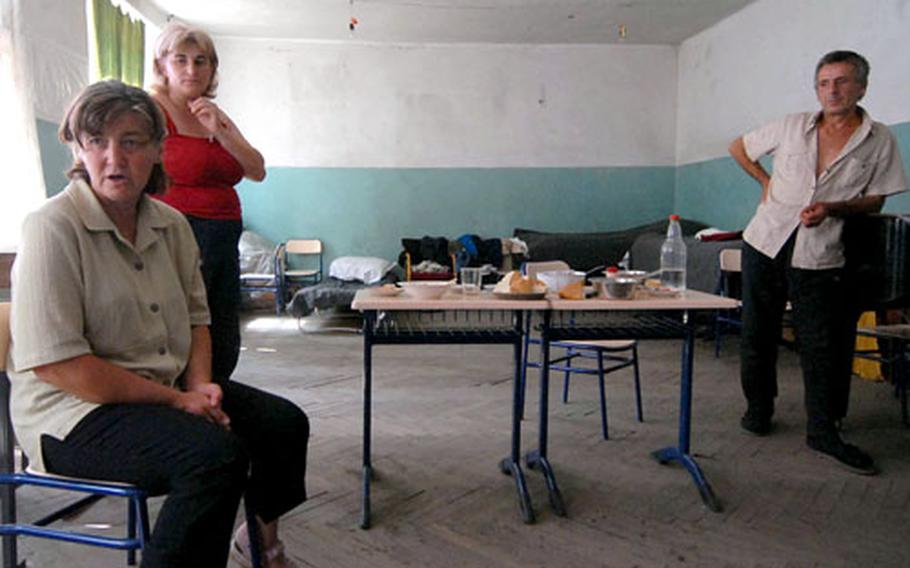 Nato Markozashvili, left, talks about fleeing her village near the South Ossetian border and life at a displaced persons&#39; center in Tbilisi. Behind her is her sister-in-law Nino, and husband Kartlos is at right. The three are staying in one of the classrooms at Public School No. 161 in Tbilisi, Georgia. They sleep on a cot and on school desks pushed together as a bed. They gave what beds were available to the children at the center. (Michael Abrams / S&S)

TBILISI, Georgia &#8212; No bread deliveries for the past couple days. No beds to sleep on. And still no idea when they&#8217;ll get to return home.

At public school No. 161 in Tbilisi, blank-faced Georgians walk around the dank displacement center, stoically pressing on with little clue about what the future holds.

More than 700 people have taken up residence at this school-turned-displacement center.

Tikhashvili, who fled his home hours after the conflict started on Aug. 7, said people&#8217;s basic needs are being met at the school. But there&#8217;s nothing in abundance, and they still lack certain things, he said.

For instance, there are only enough beds for small children. Several residents at the center on Sunday also say they aren&#8217;t getting enough food.

Helping to fill the gap are U.S. military Meals, Ready to Eat, which have made their way to the school and similar shelters around the country.

Asked about the taste, Tikhashvili said they take some getting used to.

There are more than 600 centers for displaced people around Tbilisi, where abandoned government buildings and schools are serving as shelters for people uprooted by the clash between Russian and Georgian forces. It has been more than two weeks since Georgians from the hotspots of the recent fighting were forced to flee.

For more than a week, humanitarian supplies to assist tens of thousands displaced people have been transported aboard U.S. military planes arriving in the country from Ramstein Air Base in Germany.

As of Friday, the military had delivered more than 1 million pounds of supplies to Georgia, according to U.S. European Command.

And on Sunday, the first shipment of goods aboard a naval destroyer was delivered to the Georgian port of Bat&#8217;umi. The USS McFaul delivered 82 pallets with about 155,000 pounds of supplies donated by the U.S. Agency for International Development, including hygiene items, baby food and care supplies, bottled water, and milk, EUCOM reported. [See story on Page 8]

While the military delivers the food, nongovermental agencies take the lead in dispersing the aid to the people.

At school No. 161, people seem to be getting by and doctors there said they have the supplies they need.

While some people talk of their troubles in a quiet monotone, others speak with a little more emotion.

"Here, the conditions are not good," said 51-year-old Nato Markozashvili, who shares a classroom with her husband and sister-in-law. "There&#8217;s not enough food. We have no money."

Back home in South Ossetia, the family makes their living as farmers. Away from their crops, there is no income.

"We had to leave all our clothes there. We were running for our lives," Markozashvili said.

Medical care providers at the facility said people are doing their best to cope with so much uncertainty about the future. "For some it is very difficult. They witnessed atrocities there," said Mariam Beroshvili, a general practitioner at the center.

The numbers of uprooted people taking up residence changes constantly, according to the facility&#8217;s director.

"It&#8217;s a flexible number. It changes by the minute," said Misha Mindadze, a school principal turned humanitarian crisis manaer. "Right now we have quite a big number here." To be exact: 735 people.

With the recent pullout of Russian forces from Gori, some of the residents are looking to get back home. But they&#8217;re also nervous.

There was much speculation among people at the center about the level of safety in Gori, where residents say homes have been booby-trapped and mines have been laid. "They&#8217;re (Georgian personnel) de-mining my village," said Bezhan Ksovreli, 61. "But we&#8217;re scared of the Russians. They can do anything."

"All of us want to go. But the houses are burned, destroyed," said Beridize.

As for the Georgians from South Ossetia, the circumstances are murkier. Givi Razmadze, 51, said he will never return as long as the Russians are around.

When the people first began pouring into the school for shelter it was neighbor helping out neighbor that got them through, according to Mindadze.

From restaurants donating meals, to women delivering home cooked sausages and soup, people are getting the basics, he said.

The one thing that seems to be in abundant supply is donated clothing. A mountain of hand-me-downs was piled high in a corner at the school. The young children romped about, diving into the mound and seemingly oblivious to the trouble.

The fun stopped, though, when a tired looking man shooed them away.