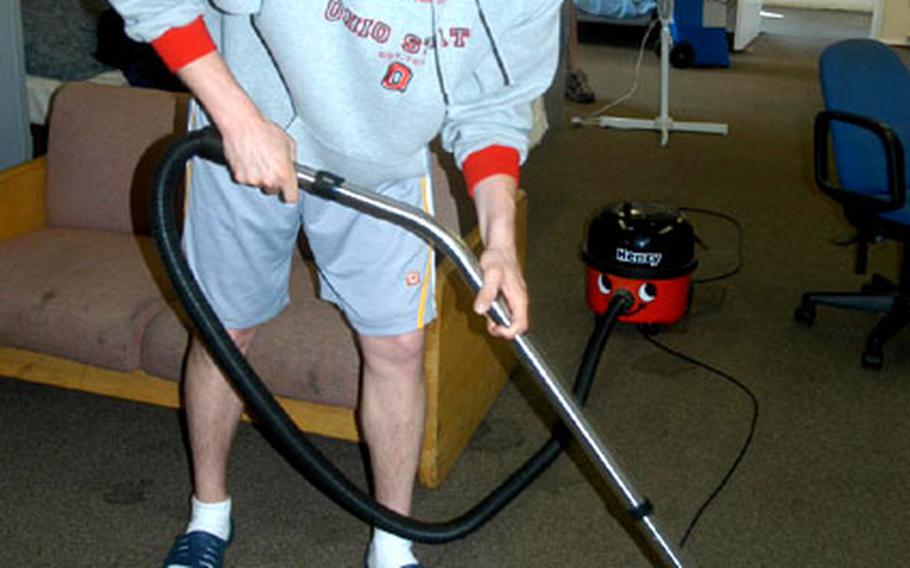 Spc. Steven Bockelman of the Ohio National Guard vacuums his quarters Tuesday before checking out at RAF Fairford, England. Several National Guard members have been deployed to the base to help with duties during the deployment of the 100th Air Refueling Wing from RAF Mildenhall, England, to the base. (Ron Jensen / S&S)

RAF FAIRFORD, England &#8212; Everyone knows what a chore it is to have company for an extended stay.

For RAF Fairford, home to 175 active-duty members, the visitors numbered about 500 and the stay lasted nearly five months. That&#8217;s how long the 100th Air Refueling Wing from RAF Mildenhall hung its hat at the base across England while the runway at home was undergoing a makeover.

But, as the visit ends this week, the hosts say it was standard operating procedure to have folks underfoot.

RAF Fairford is a contingency base, gearing up for crises such as the Kosovo war or the Iraq war, and then winding down to become Sleepy Hollow again when the trouble has passed.

But the visit by the 100th ARW lasted longer than most. For example, Operation Iraqi Freedom had the base buzzing for about two months. The people from RAF Mildenhall were on base long enough to become part of the landscape.

It was Hertlein&#8217;s mission to house, feed and entertain the visitors. A dining hall was taken out of mothballs and billets were cleaned and opened.

Tours were added to the schedule.

The Community Activity Center, which is normally open 42 hours in one week, kept its doors open more than twice that amount.

Numbers tell the story and the best numbers are found at the dining facility. It served 109,000 hot meals during the time of the deployment. In charge of that was Senior Master Sgt. John Baker, 57, a former Navy cook and now a member of the Air National Guard out of St. Joseph, Mo.

The facility never closed and served four meals daily, said Baker, a letter carrier by trade, who volunteered to stay the final two months after being eligible to return in late May.

Having an influx of people for several months also has helped stuff the coffers of various businesses around the base.

&#8220;Very grateful. Very grateful,&#8221; said Bobby Arora, manager of the base&#8217;s Subway sandwich shop. He said his business quadrupled because of the Mildenhall airmen and the National Guard troops that augmented the base population.

The troops weren&#8217;t doing much cooking, but they bought all they could of chips, soda and bottled water, among other snack items.

And Glenn Schaming a former airman stationed at the base and now assistant manager of Skytanker Lanes bowling center, where food and beer are served, said business picked up about 60 percent during the early months of the deployment.

&#8220;Standing room only every night,&#8221; he said, until the troops learned their way to the local towns and the pubs and clubs in the area.

But, he said, the extended stay put more stress on equipment and furniture, meaning some will have to be replaced.

And Schaming said some of the extra dough was paid to employees who worked longer hours than normal.

For the deployed troops, the stay at RAF Fairford gave them a look at a part of England even quieter than the East Anglia region around Mildenhall.

He said the firemen answered as many calls in one month as they do in one day back at the home base, he said. Most of them, just like at home, were false alarms.

Another airman said it was strange being deployed close enough to home to almost smell it.

The mission went on as usual for the 100th ARW. Col. Bryan Benson, the 100th Operations Group commander, who commanded the deployed unit, said aircraft flew more than 2,500 sorties from RAF Fairford and passed 18 million pounds of fuel to 3,000 customers.

Many of them, he said, were high-priority customers, such as the president or coalition forces going to or from Iraq and Afghanistan.

&#8220;It was a great flying environment,&#8221; Benson said after bringing the first KC-135 Stratotanker back to RAF Mildenhall on Wednesday.

He said RAF Fairford has put its resources where they can best benefit the flying operations. He said it is &#8220;one of the best airfields I&#8217;ve operated out of.&#8221;

Arnold said he will receive feedback from the 100th ARW regarding what went well and what could have gone better.

But there is no rest for the base. The Royal International Air Tattoo, billed as the world&#8217;s largest military air show sponsored by the Royal Air Force, begins at RAF Fairford on July 16. It brings in excess of 200,000 people to the base for the weekend.