Dispensing inspiration from their beds 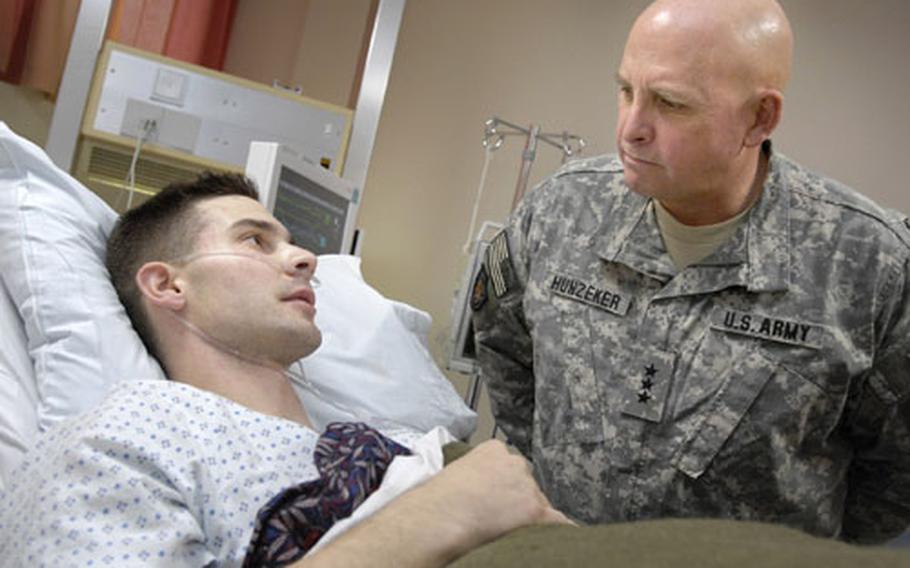 Lt. Gen. Kenneth Hunzeker, commander of V Corps, visits with Sgt. Kenneth Towne, a Marine from the 2nd Intelligence Battalion out of Camp Lejeune, at Landstuhl Regional Medical Center. Hunzeker, who has made numerous visits to the hospital, said during this visit that the attitude of the wounded warriors here always picks up his morale. Towne was sent to LRMC from Iraq after complications occurred from an appendectomy. (Ben Bloker / S&S)

Lt. Gen. Kenneth Hunzeker, commander of V Corps, visits with Sgt. Kenneth Towne, a Marine from the 2nd Intelligence Battalion out of Camp Lejeune, at Landstuhl Regional Medical Center. Hunzeker, who has made numerous visits to the hospital, said during this visit that the attitude of the wounded warriors here always picks up his morale. Towne was sent to LRMC from Iraq after complications occurred from an appendectomy. (Ben Bloker / S&S) Lt. Gen. Kenneth Hunzeker visits Army Spc. Sean Staggs, 21, from the 2nd Stryker Cavalry Regiment out of Vilseck, Germany. Staggs was wounded near Bahgdad when his vehicle was hit by a roadside bomb. (Ben Bloker / S&S) 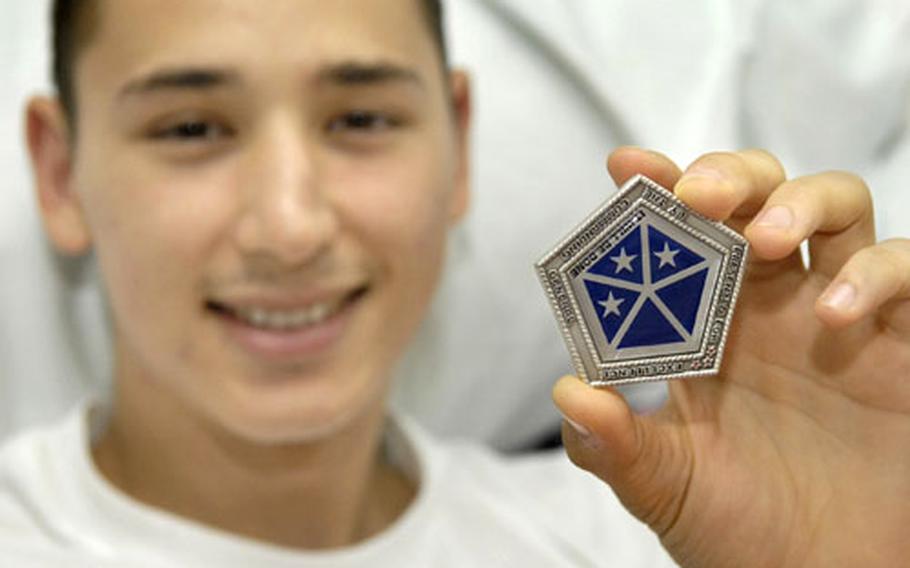 LANDSTUHL, Germany &#8212; After the bomb hit, after the confusion, despite the pain, when he realized he was going to live, Spc. Sean Staggs laughed.

I was laughing, and then I was cursing at the Iraqis,&#8221; Staggs said from his hospital bed at Landstuhl Regional Medical Center. &#8220;We all realized we were all right.&#8221;

Staggs was one of four soldiers from the 2nd Stryker Cavalry Regiment wounded when a roadside bomb hit their Stryker on Oct. 21 in Baghdad. Five others in the Stryker escaped unscathed.

Staggs, like two others riding in the Stryker and now at the hospital, had undergone surgery for broken bones in his ankle &#8212; a consequence of the power of the blast. Surgeons had put in pins to stabilize the bones and reduce healing time, and after some weeks of recuperation, Staggs was expected to be sent back to Iraq.

Which was fine with him.

Meeting the 21-year-old soldier from California was just the interaction Staggs&#8217; corps commander, Lt. Gen. Kenneth Hunzeker, wanted in between his many meetings.

Hunzeker, accompanied by hospital commander Col. Brian Lein, toured the 138-bed facility that treats troops injured in Iraq and Afghanistan &#8212; including those of coalition partners. American troops en route to the U.S. for further treatment, the bulk of those treated, stay on average only three days.

But that was no help to the 25-year-old soldier brought in on life-support with burns covering 85 percent of his body. He&#8217;d been wounded in a roadside bomb attack less than a day earlier in Iraq, a nurse said. He was wheeled into a specially heated room with 10 doctors, nurses, therapists and technicians trying to keep him alive before he was to be flown to Brook Army Medical Center&#8217;s burn unit in San Antonio the next day.

Whether he would live was difficult to predict, Lein said. The soldier was young and strong, and that worked in his favor, and burn treatments have seen significant advances.

Towne said he&#8217;d gotten an appendectomy in Assad, and then a post-surgery infection had sent him to Landstuhl.

Towne said he was fine and hoping to get back to Iraq, where his wife was still in Fallujah and on what had been the third deployment for them since they became a couple.

Hunzeker handed out V Corps coins as he went from bedside to bedside. For another solider who had landed in Landstuhl after appendectomy complications, and said he felt anxious being away from Iraq and his &#8220;family,&#8221; Hunzeker removed his own &#8220;Army Strong, Army Safe&#8221; bracelet and handed it over.

The former commander of the 1st Infantry Division, who was in Iraq training police when he was called back to Germany a few months ago to command V Corps, Hunzeker especially wanted to see the injured Stryker soldiers.

Staggs, who turned 21 just five days before the bomb hit the Stryker, offered a compelling description of the event.

At that point, he said, he resorted to some profanity.

He crawled his way over to an abandoned building, along with the other soldiers, and they called for a medical Stryker, he said.

They realized they were going to be OK. That&#8217;s when he started to laugh, he said.