Diseases can be more deadly than warfare 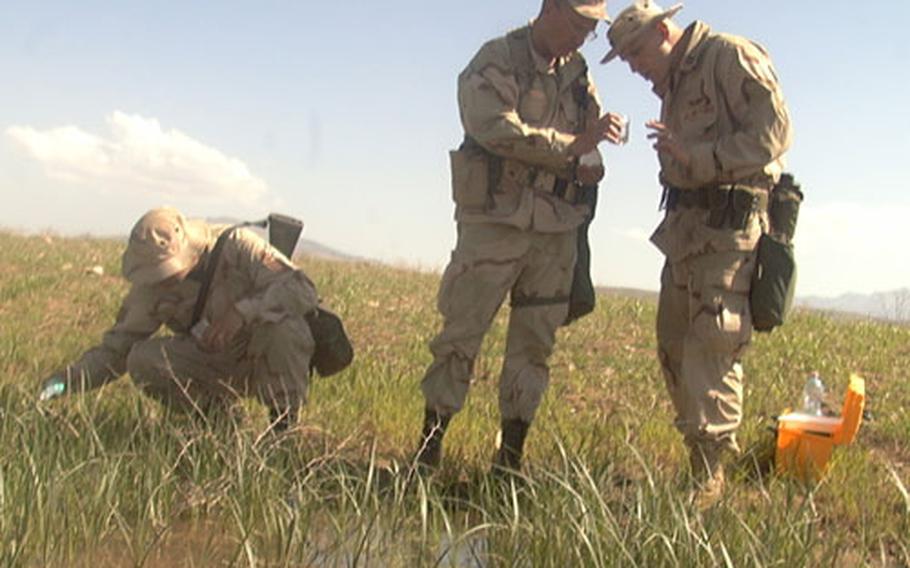 On Thursday, Air Force Tech. Sgt. Heinz Kiefer (left), Maj. James Poel and Capt. Ron Allen gathered water and examined larva to determine if a particular type of mosquito, one known for being a carrier of the malaria parasite, is present and a threat to the airmen and soldiers camped at the airfield. The three are assigned to the 86th Contingency Response Group’s Environmental Medicine Flight from Ramstein Air Base, Germany. (Kevin Dougherty / S&S)

BASHUR AIRFIELD, Iraq &#8212; Aside from the crazy climate in the upper reaches of northern Iraq, airmen and soldiers face challenges ranging from vipers to viruses.

U.S. soldiers and Marines dodging bullets to the south might make light of such &#8220;enemies,&#8221; but they do pose a serious health risk.

In World War I, the U.S. military suffered an estimated 50,000 deaths from disease and accidents, Poel said, citing medical statistics from Brooks City-Base, Texas, a technology and business center. That number rose to 67,000 in World War II.

Conflicts in Korea and Vietnam led to noncombat fatalities in the neighborhood of 16,000 and 10,000, respectively. In the first Gulf War, 207 troops died from disease or noncombat injuries, more than died in combat.

Poel heads a six-member team that deployed a couple of weeks ago from Ramstein Air Base, Germany, to Bashur airfield in northern Iraq. The team includes another public health expert, two bioenvironmental engineers, a medical doctor and a health physicist.

Members of the team spend a good part of their day monitoring the camp&#8217;s sanitation and hygiene conditions. The team also routinely checks the quality of the air, water and soil. In addition, it keeps tabs on creatures large and small, from snakes and scorpions to mice and mosquitoes.

On Thursday, Poel, Kiefer and Capt. Ron Allen, the flight doctor, ventured just outside the camp to check standing puddles for mosquito larvae.

Kiefer took water samples, while Poel crouched near the water.

That has been an issue, so much so that servicemembers are taking tablets of the anti-malaria medicine mefloquine. Malaria is spread by the bite of a mosquito, if the mosquito stung a person before who had the disease-causing parasite, Allen said.

Fortunately, Poel has been noticing a different variety of mosquito larva, a type that doesn&#8217;t pose a health risk.

Before arriving, the team read medical reports on the region.

The canvas included the national Centers for Disease Control and Prevention, the World Health Organization and the Armed Forces Medical Intelligence Center at Fort Detrick, Md.

The pickings were slim.

Much of the information given to U.S. troops is common sense: Take your medicine. Wash your hands. Stick to approved food and water sources. Get proper rest when possible.

On Friday morning, Allen and his medical mates had a new problem: three cases of conjunctivitis, or pink eye. That led the health team to reiterate the importance of washing hands as often as possible.

Staying clear of certain bugs and critters is important, too.

The region has its share of undesirables. Several days ago, a venomous snake slithered into camp. The serpent met with a crude fate.

&#8212; Kevin Dougherty is embedded with the Air Force in northern Iraq.