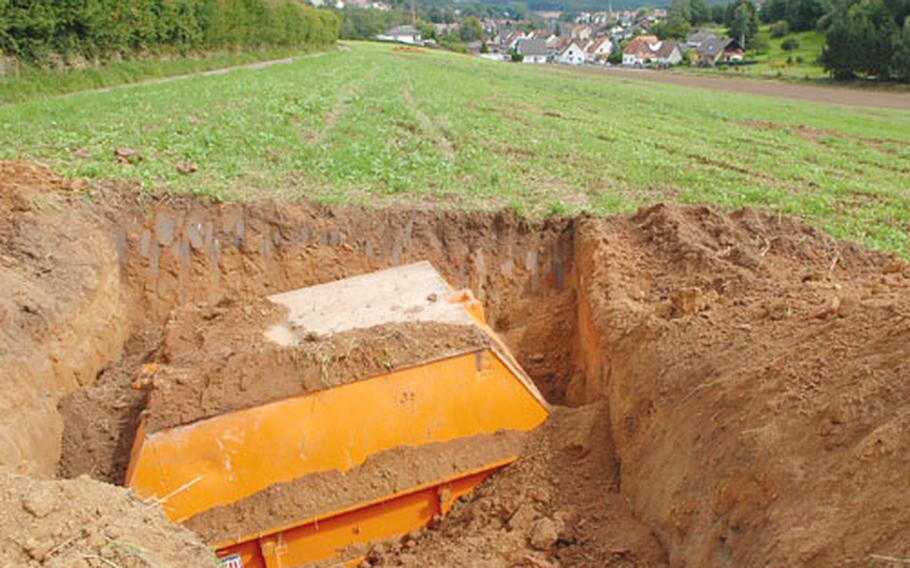 A construction dumpster covers an unexploded World War II bomb on the outskirts of Hochspeyer, Germany. Three bombs from the era have been discovered near the village, and about 500 residents will be evacuated on Monday when an explosives team will defuse the bombs. (Michael Abrams / S&S)

German authorities near Kaiserslautern will evacuate a portion of the town of Hochspeyer on Monday following Wednesday&#8217;s discovery of three unexploded World War II-era bombs.

Roughly 500 residents will be affected by the evacuation order, which goes into effect at 8 a.m. German explosives experts are expected to dismantle the bombs starting about 11 a.m., and residents should be able to return by noon, according to an e-mail sent Thursday by Col. Donald Bacon, commander of the 435th Air Base Wing at Ramstein Air Base.

German rail and transport authorities have also issued orders to shut down the rail lines and local roads during the disarmament.

"With the effective area, that reaches right into the housing and industrial and shopping" areas, said Michael Pletsch, the civilian security police operations officer for the 569th U.S. Forces Police.

The third bomb reportedly was found in a forested area near a town recycling yard.

The 569th will help evacuate and patrol the town during the disarming operation.

The bombs were found with the help of World War II-era photographs of the area, and have been partly excavated and marked.

Hunks of rusty metal were found mixed with the soil around one of the bombs, but there were no markings to indicate where it might have come from.

Pletsch said he didn&#8217;t know whether the bombs were American or British, but both countries bombed Kaiserslautern and surrounding areas during World War II.

"Hochspeyer must be one of the ones that really got hit because this is not the first time" unexploded ordnance from the war has been found in the town, Pletsch said. "I mean, we do this in Hochspeyer maybe twice a year."

Roughly 500 residents were evacuated in 2005 when an unexploded bomb was found in another area of town, and construction was shut down on a road bypass in 2003 after workers found a 1,000-pound American bomb.