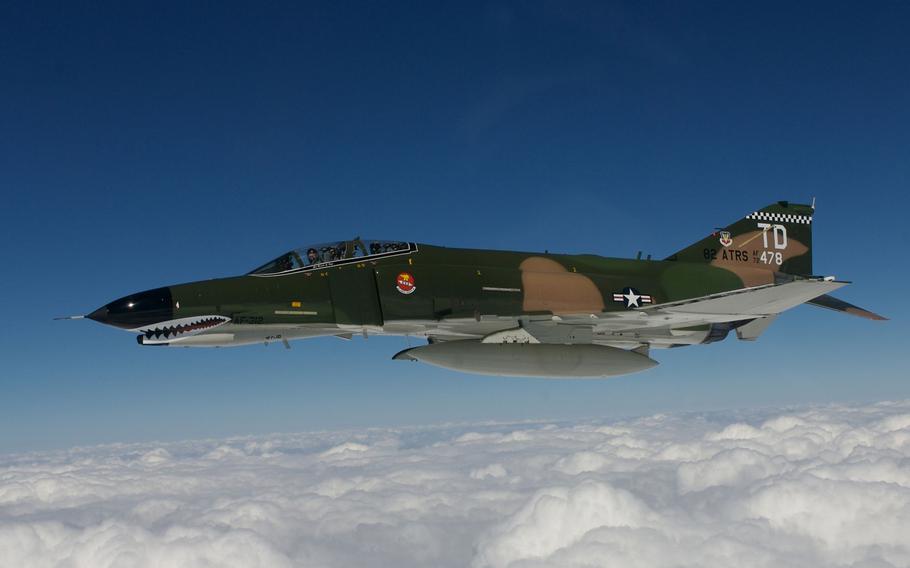 Gen. Ronald E. Keys, head of Air Combat Command, and Lt. Col. J.D. Lee fly an F-4 Phantom II on Sept. 28, 2007, during the final flight of Key's 40-year military career. The F-4 has been retired from front line squadron service in the U.S. and is being phased out around the world. (Samuel Rogers/U.S. Air Force)

Gen. Ronald E. Keys, head of Air Combat Command, and Lt. Col. J.D. Lee fly an F-4 Phantom II on Sept. 28, 2007, during the final flight of Key's 40-year military career. The F-4 has been retired from front line squadron service in the U.S. and is being phased out around the world. (Samuel Rogers/U.S. Air Force) 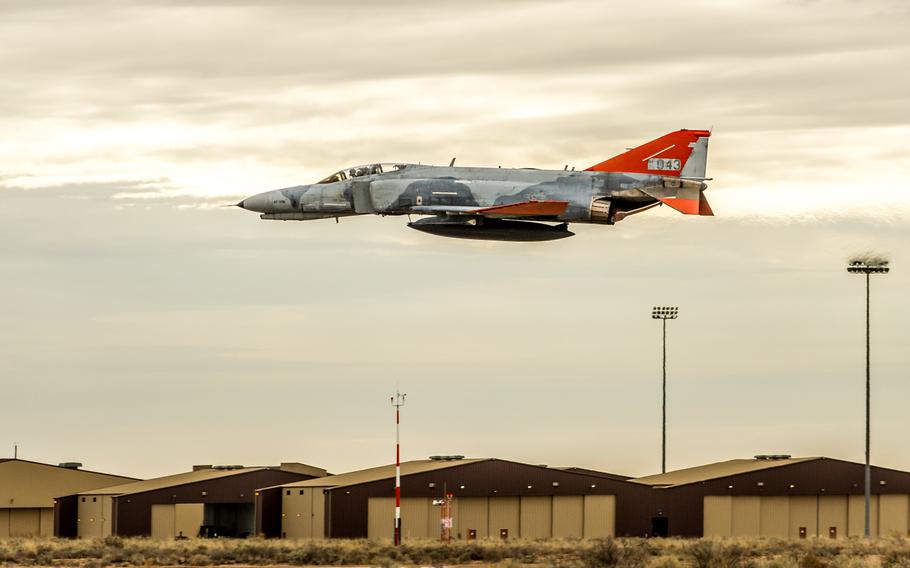 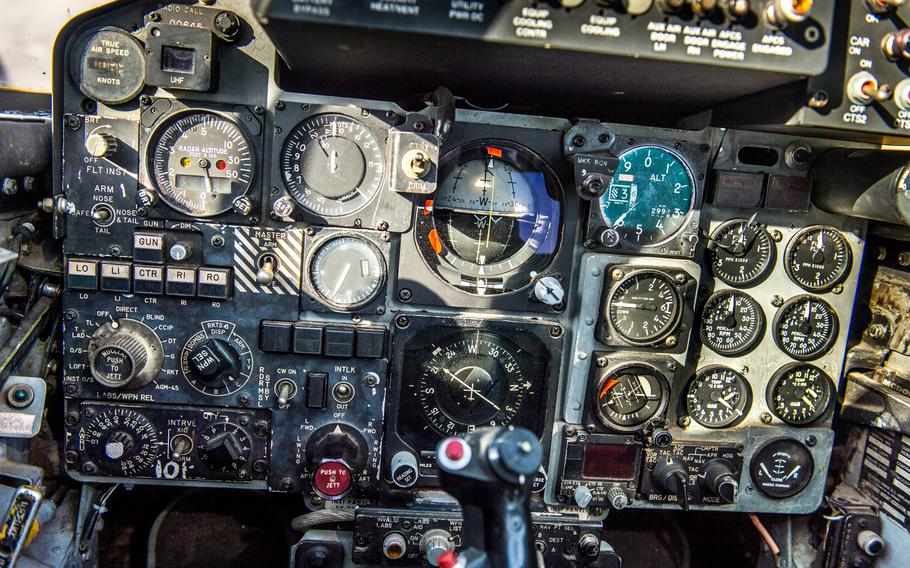 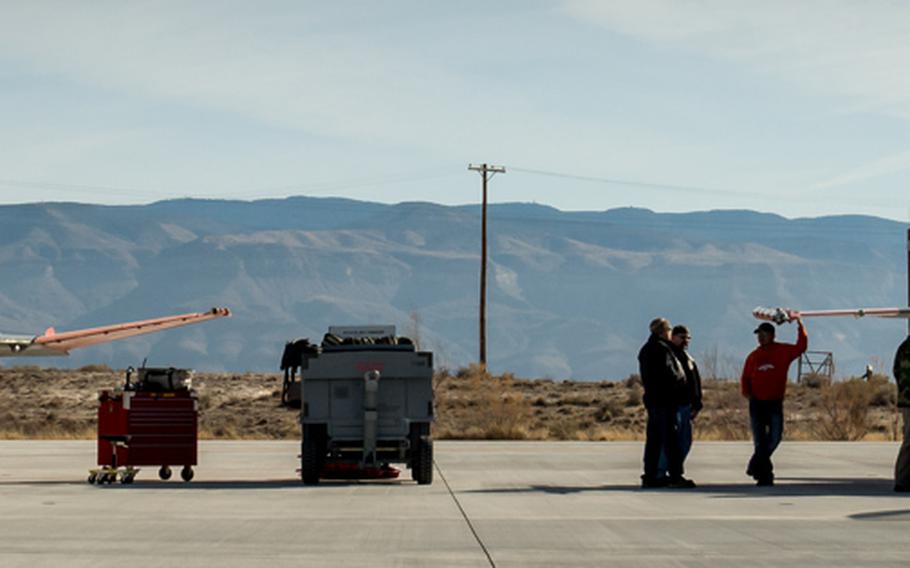 It epitomized U.S. air power during the Cold War, was used extensively by the U.S. in Vietnam and was still in active service decades later. But now, the iconic F-4 Phantom II fighter-bomber is flying into the sunset.

Only a few dozen Phantoms remain in active service around the world out of 5,195 built during a 20-year production run that started in the 1950s. The American ones, flown by the Air Force, Navy and Marines, are all gone, many of them having been shot down in their final roles as target-practice drones. Those still in use by foreign air forces are slated for retirement in the near future.

With a top speed exceeding Mach 2.2, the supersonic, long-range fighter-bomber is still remembered fondly, particularly by those who flew it.

The F-4 was, “in the hands of a talented pilot and weapons systems operator ... formidable and nearly indestructible,” said retired Air Force Gen. Ronald Keys, who flew Phantoms in Vietnam in 1969-70.

The plane was a “true multi-role platform” that “played a big part” in numerous conflicts, said Alan Warnes, an editor and writer with the U.K.-based Air Forces Monthly publication.

“In Vietnam the F-4C was the U.S. Air Force’s primary air defense cover ... At the height of the Cold War in Europe, the Phantom was everywhere — there were over 1,000” serving the West German, British and U.S. air forces, he said.

Soviet-built MiG-21s were the Phantom’s main foe throughout the Cold War. Compared to the diminutive MiG, which could carry 4,400 pounds of ordnance, the Phantom was able to load a whopping 18,000 pounds of munitions, including bombs, air-to-ground and air-to-air missiles, on nine underwing hardpoints. One of the more flattering nicknames given to the Phantom over the years was “the world’s leading distributor of MiG parts.”

The Phantom was officially retired from squadron duty in the U.S. in 1996, five years after it flew combat missions in Iraq during Operation Desert Storm. But it found a second life, with hundreds of the fighter-bombers being converted into full-scale target drones that were used to train pilots in air-to-air combat and test munitions.

The last conversion rolled off the production line in 2013. Three years later, the Air Force held a final flight ceremony for the Phantom at Holloman Air Force Base in New Mexico, marking the end of nearly 60 years of U.S. service.

Today, Greece, Turkey, Iran, South Korea and Japan are the last operators of the aircraft. With the exception of Iran, all of the countries that still fly Phantoms are actively looking to replace them with more up-to-date airframes.

Even in Iran, which Washington sold 225 F-4s to in the 1970s, the fleet of still-airworthy Phantoms is expected to shrink in the next few years due to increasing maintenance problems as the planes grow older. The U.S. blocked deliveries of spare parts and maintenance support to Iran for the planes after the 1979 Islamic Revolution, but about 50 of Iran’s Phantoms are still flying, largely because the Iranians have cannibalized parts from other planes, and smuggled in or reverse-engineered others.

Even in its heyday, the F-4 had its issues, including “cockpit visibility, engines that smoked (excessively), not the best turning machine, first generation radar technology,” said Keys, who flew the Phantom out of Da Nang Air Base in Vietnam. “Compared to something like the F-15 Eagle, F-16 Viper, F-22 or F-35, it was pretty much analog watch technology compared to AI and digitalization.”

Throughout its decades of service, detractors have also poked fun at the Phantom for its less-than-sleek appearance and other shortcomings, giving it unflattering nicknames such as the Flying Anvil, Old Smokey and Lead Sled.

As it flies into the sunset, a joke about the design’s emphasis on power will be remembered by both it fans and detractors: The F-4 was proof that even a brick could fly, given a sufficiently powerful engine.