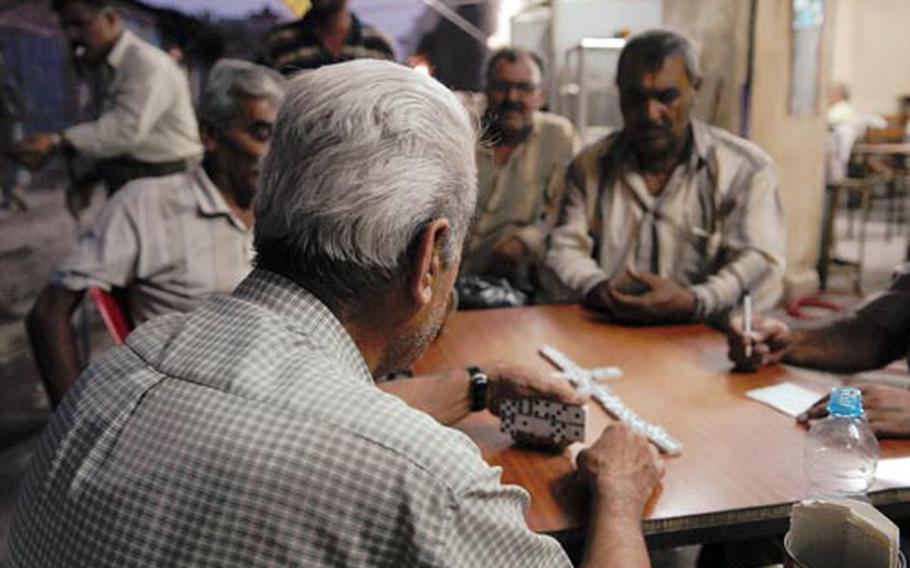 Iraqi men play dominoes in one of Kirkuk’s markets. The atmosphere in the markets and other areas is generally relaxed even though the province&#39;s status has not been resolved. (James Warden / S&S)

KIRKUK, Iraq &#8212; While Iraqi politicians struggle to draft rules that allow them to hold elections this fall, disagreements on where Kirkuk belongs could leave voters in the province watching from the sidelines.

Iraq&#8217;s presidential council is expected to order lawmakers to vote on election rules Tuesday if they can&#8217;t reach an agreement before then, said Melissa Ward, governance adviser for the State Department&#8217;s Provincial Reconstruction Team in Kirkuk. They could also agree to temporarily set aside issues surrounding Kirkuk in order to move forward in election discussions.

Were that to happen, leaders would likely postpone elections in Kirkuk until there&#8217;s a decision on whether the province belongs with the Kurdistan Regional Government or the central government.

"The whole election law is languishing because of one issue: Kirkuk," Ward said.

Kirkuk is a historically Kurdish area whose oil fields are home to about 13 percent of Iraq&#8217;s proven reserves. Saddam Hussein&#8217;s regime displaced many Kurds with Arabs during the 1990s in a bid to control the province.

A compensation plan is available for Arabs and Kurds who want to move back to where they originally lived. But the lucrative oil money has made the sides suspicious of one another.

Many Iraqis fear that the Kurdistan Regional Government wants to secede and take the oil fields with it. Many Kurds fear that the central government would use the oil money to oppress them or withhold services as it did in the past.

No chance yet to decideVoters were supposed to have a chance to decide where Kirkuk belongs in a referendum that the Iraqi Constitution required to take place by Dec. 31, 2007. The government extended that deadline six months when that date passed without any action. But leaders again failed to make any progress on a proposal to submit to voters, and the newer deadline also slipped by without a referendum.

Until voters decide where their province belongs, any provincial election results would be in jeopardy, Ward said.

That could be three or more years away, though, Ward said. Officials first need to find out the proportion each ethnic group makes up in Kirkuk in order to establish representation in the provincial council. The province&#8217;s last census was in 1957, and it has since undergone dramatic changes. Estimates on the city&#8217;s size vary wildly from 800,000 to 1.5 million.

An official census would take a year to complete, she said. It would also need to be vetted by international monitors because of corruption allegations against the Kurdish authorities who control the government offices.

It&#8217;s thought that Kurds from outside Kirkuk flooded the province in order to vote during the national elections of 2005. In one case, neutral monitors barred 82,000 people from voting when they couldn&#8217;t prove residency with either their ration cards or official identification, standard documents every Iraqi possesses. However, Kurdish officials lobbied Baghdad and threatened to boycott the elections if the people weren&#8217;t allowed to participate.

A faster alternative, Ward said, would be for the groups to mutually recognize an official ratio without actually counting everyone. Yet the sides have so far only proposed dubious ratios that benefit their own groups. The Arabs, for example, have recommended that they, the Kurds and the Turkoman population each receive equal shares of the tally &#8212;&#8211; even though it&#8217;s obvious Kirkuk has more Kurds than any other group &#8212; although it&#8217;s not clear by how much.

"There&#8217;s a whole lot of ability on all sides to manipulate the numbers," Ward said.

It would take another year to hold provincial council elections and probably take yet another year for the actual referendum, although those estimates are hardly written in stone.

"As to the timetable on that, your guess is as good as mine," Ward said.

In the meantime, Kirkuk could suffer for not having elections at the same time as the rest of the country. The current provincial government would most likely continue if elections aren&#8217;t held, she said. But Iraq&#8217;s new provincial-powers law delegates certain authority to the provinces starting after this election. If Kirkuk didn&#8217;t have an election, it might not have all the powers of other provinces.

Peaceful at the momentFor now, Kirkuk residents appear to be quietly waiting for their chance to weigh in on the issue. Lt. Col. Dennis Sullivan, commander of 2nd Battalion, 22nd Infantry Regiment, said everyone is working toward a political solution, not a military one. Sullivan&#8217;s battalion is responsible for Kirkuk, yet security is good enough that the unit has only assigned a platoon to the city.

"[The referendum] has not been a flash point," he said. "When we took over we thought it would be."

Residents were surprisingly ambivalent about the delay. Sadik Athmon, a Kurdish hardware store owner, was one of many who said he wasn&#8217;t worried.

"Personally, I&#8217;m going to vote in the referendum, and I hope this article gets passed," he said. "As long as it&#8217;s an article in the constitution, it will be carried out."

Adnan, an Arabic man living in Kirkuk, said simply that it isn&#8217;t time to have the referendum because the politicians are still working out the details. Mohammad Masir, a Kirkuk key maker, said he hasn&#8217;t been following the issue at all.

Mahmood Azadeen, a shoe and clothing store owner with mixed Kurdish-Arabic ancestry, said he&#8217;s just enjoying the growing prosperity and security like many people in the city.

"I have nothing to do with politics," he said. "All I care about is my business."