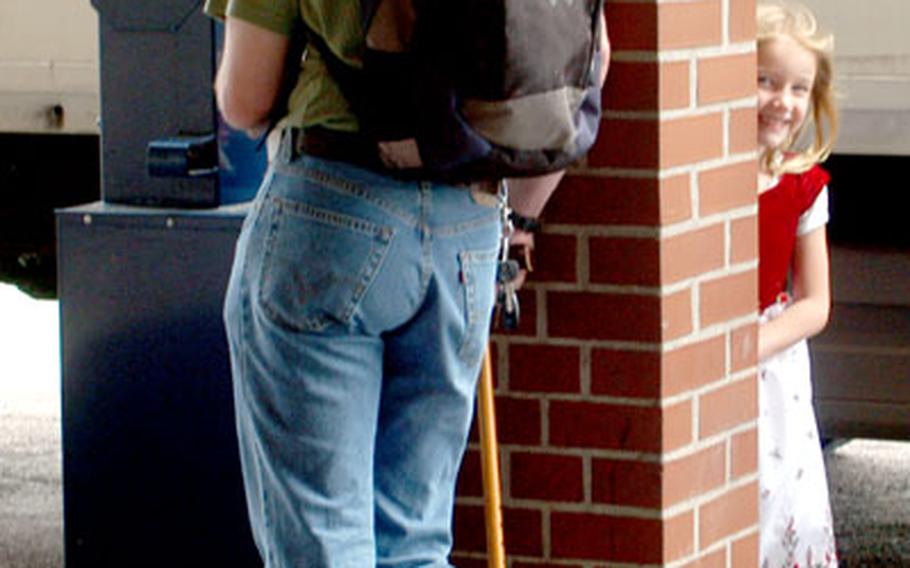 Sgt. Archie Hennessey, crushed by a piece of rebar he was ordered to lift during an Army Special Forces selection course in September and now being medically separated from the Army, leans against a pillar for support in an unguarded moment as his daughter, Summer, plays hide-and-seek. (Nancy Montgomery / S&S)

Sgt. Archie Hennessey, crushed by a piece of rebar he was ordered to lift during an Army Special Forces selection course in September and now being medically separated from the Army, leans against a pillar for support in an unguarded moment as his daughter, Summer, plays hide-and-seek. (Nancy Montgomery / S&S) 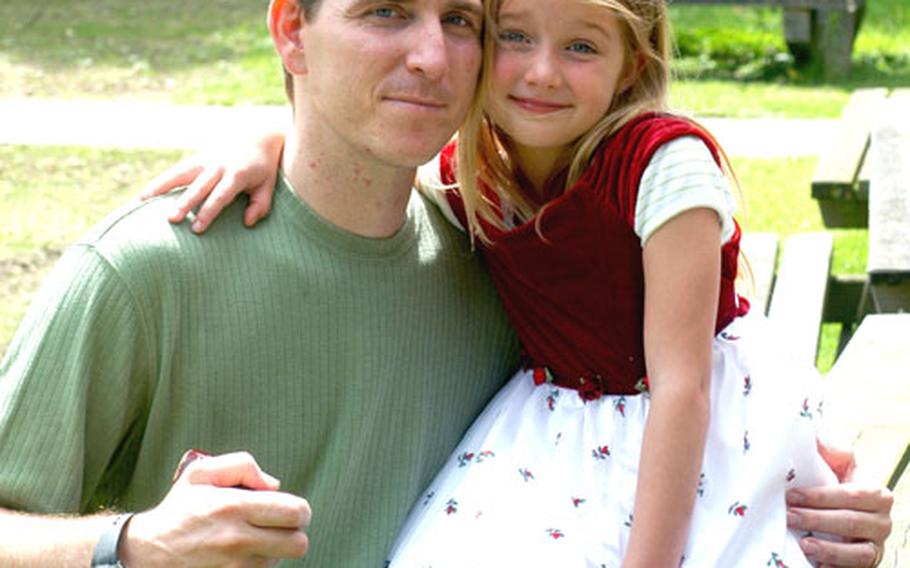 Sgt. Archie Hennessey, with his daughter, Summer, says he feels betrayed that the Army classified him as only 10 percent disabled. (Nancy Montgomery / S&S)

HEIDELBERG, Germany &#8211; If you&#8217;re a soldier reporting to Special Forces Assessment and Selection, &#8220;You should be at 100 percent physical ability with zero percent stress level,&#8221; the Army says.

He had trained for months before going on temporary duty from the Heidelberg Military Intelligence Detachment, 2nd MI Battalion, 66th MI Group, to the monthlong selection program at Fort Bragg, N.C., in September and was ready for the challenge.

But a week or so into the course, an accident changed everything.

Hennessey and other soldiers were ordered to hoist thousands of pounds of rebar from a construction site onto their shoulders and clear it away.

As bad as that sounds, it was just the beginning of a health decline that&#8217;s changed Hennessey&#8217;s body, his sense of himself and his future.

Hennessey, 34, not only won&#8217;t become a Special Forces medic as he had planned, but he&#8217;s also soon to become a civilian with what he says is chronic back pain and disability. He&#8217;s made a dozen trips to the emergency room in past months, needs a cane to get around and takes handfuls of painkillers daily.

Worst of all, he said, is what he views as the Army&#8217;s abandonment of him: a classification that he&#8217;s just 10 percent disabled, entitling him to a medical discharge and severance pay of about $10,000.

Hennessey&#8217;s medical records say he suffers from &#8220;lumbar neuritis,&#8221; or inflamed nerve tissues in the low back as a result of the injury that he says is debilitating.

But an Army Physical Evaluation Board in Washington, D.C., this month decided that while he was unfit for duty because of the injury and should be discharged, his disability rating was 10 percent. That meant he would receive severance pay calculated on his base pay and three years&#8217; active-duty service.

His commander, Capt. Darren A. Spaulding, wrote in a letter to the Physical Evaluation Board that, prior to the injury, &#8220;Sgt. Hennessey&#8217;s performance was superb. But now, Sgt. Hennessey experiences continuous pain during the day.&#8221;

If Hennessey had been classified as 30 percent disabled, he&#8217;d have received much more compensation. Thirty percent is the threshold for troops with less than 20 years of service to receive retirement disability pay and the other military benefits that come with it.

&#8220;If you receive 30 percent or higher, you get a disability check for the rest of your life,&#8221; said Maj. Orlando Rummans, patient administration chief for the Europe Regional Medical Command, Command Surgeon.

Hennessey said the most important thing for him would have been health-care benefits for him and his family.

Hennessey is appealing his rating at a formal Physical Evaluation Board in Washington on July 30.