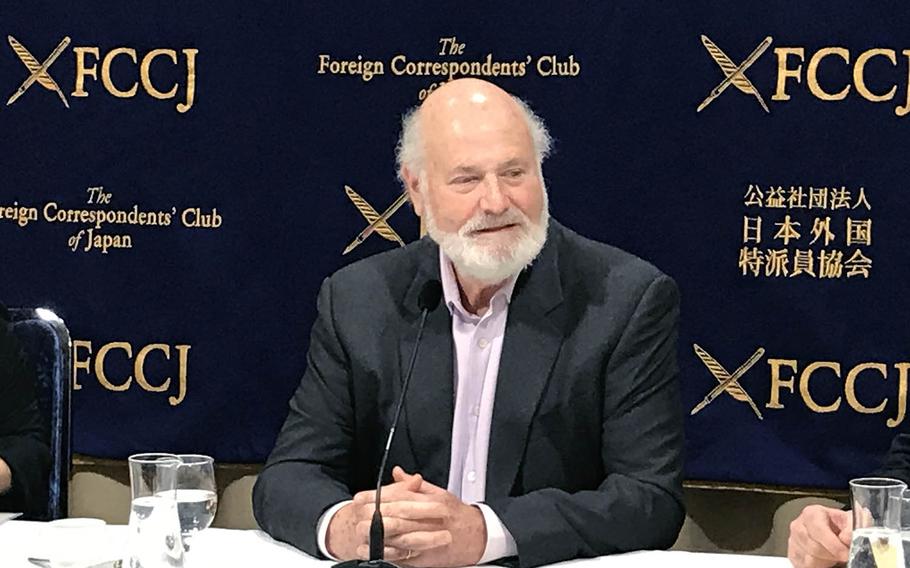 Hollywood director Rob Reiner speaks about his film, "Shock and Awe," at the Foreign Correspondents' Club of Japan on Friday, Feb. 1, 2019. (Seth Robson/Stars and Stripes)

TOKYO — Hollywood director Rob Reiner drew a crowd of reporters on his first visit to Japan in more than three decades to promote his Iraq War journalism film “Shock and Awe.”

The maker of hits and cult classics such as “This is Spinal Tap,” “The Princess Bride,” “When Harry Met Sally” and “A Few Good Men” spoke Friday at the Foreign Correspondents’ Club of Japan.

“Shock and Awe” — which was released in the United States in 2017 but makes its Japan debut next month — tells the story of Knight Ridder journalists who, the film contends, “got it right” in their reporting of the lead up to the Iraq War following the Sept. 11, 2001, attacks on the World Trade Center and the Pentagon.

Reiner has made a film that’s critical of a “mainstream media” that, he believes, failed to uncover the real reasons for the Iraq War until it was too late. Spoiler alert: He doesn’t think official concern about weapons of mass destruction was genuine.

“We knew that the administration was using the fear of the American public in going forward and invading Iraq,” Reiner told reporters after showing them highlights from “Shock and Awe.”

The scenes showed Woody Harrelson and James Marsden in their roles as Washington, D.C., reporters Jonathan Landay and Warren Strobel — with Reiner co-starring as their editor, John Walcott — as they uncover a plot to fool the American people into going to war. The film also stars Tommy Lee Jones and Jessica Biel.

Reiner said he wasn’t aware of the Knight Ridder reporting at the time it was published.

“I was reading the New York Times and The Washington Post and all the mainstream outlets and they were all singing from the same playbook,” he said. “They were all stenographers, as we say in the film, for the [President George W.] Bush administration.”

Reiner seems as passionate about his film as he is about resisting President Donald Trump. The pair have a bit in common, including opposition to the Iraq War, criticism of the mainstream media and strong opinions of current events shared with the world via Twitter accounts.

Trump’s criticism of the media is part of the “authoritarian’s playbook to confuse people and make them fearful,” Reiner said.

Despite his focus on what he sees as a major failure of the press, Reiner seems to think journalists have learned their lessons and that they’re working hard to hold the current administration to account. He singled out the cable networks CNN and MSNBC for praise.

“The press is under assault and we need to do everything we can to make sure the press stays free and independent,” he said.