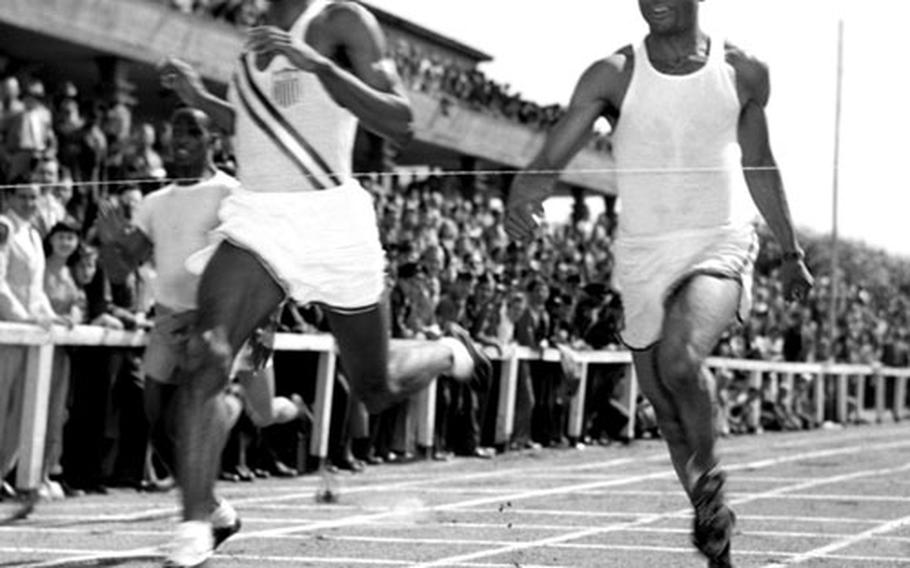 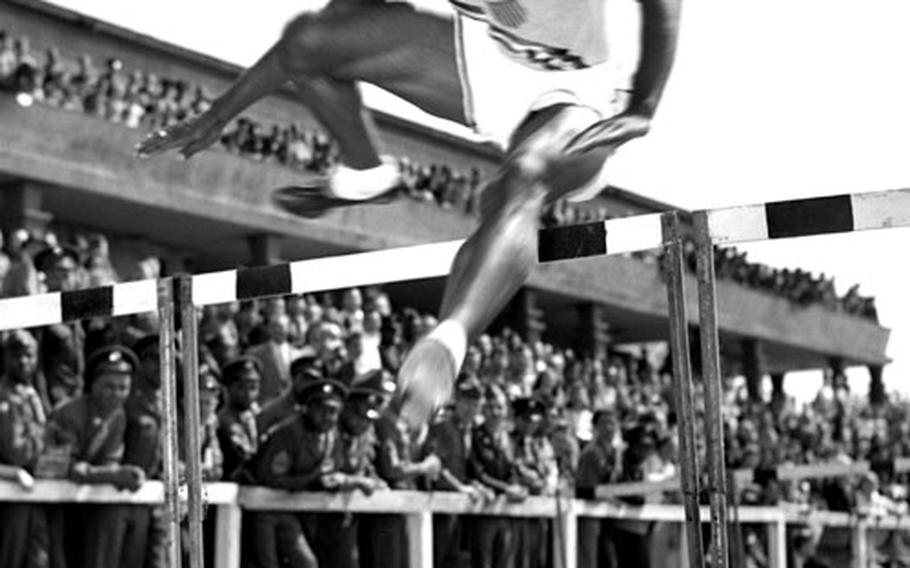 Buy Photo
Harrison Dillard in his specialty, the hurdles. (Henry Compton/Stars and Stripes) 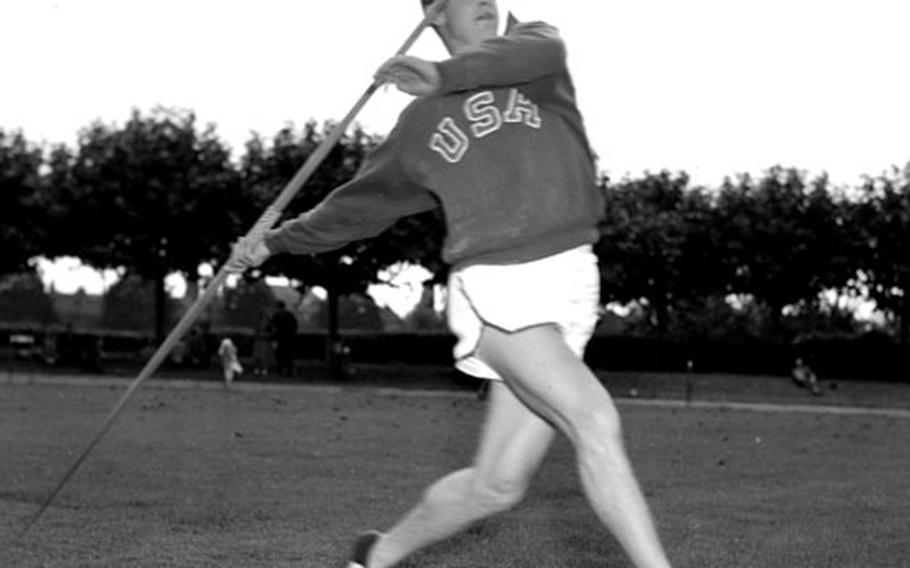 The Olympic stars captured all 10 events involving EC competitors, and, as an added attraction, Olympic coach Carl Olsen had his pole vault, hammer throw and javelin aces give exhibitions.

Best mark of the afternoon was turned in by Morcom, who cleared 14 feet 2 inches in the pole vaulting classic, as compared to the winning 1948 Olympic vault of 14 feet 1 3/8 inches. Morcom, who finished a poor sixth in the finals at London, also bettered by eight inches the German record set in 1938.

Most thrilling event of the afternoon took place in the 400-meter relay, in which the Olympic competitors breezed through in 43.8, Dillard anchoring the quartet.

Fortune Gordien, discus specialist who was the initial member of the relay squad today, gave Abel Umeamaka a 15-meter handicap as the event opened. Getting off to a much better start than his opponent, Gordien gained almost five meters on Umeamaka. High jump star Verne McGrew then narrowed the gap to eight meters against James Perry, and Ewell almost evened it up by pulling to within two meters of John Morris at the final exchange of batons.

Dillard caught speedy Joe Lilly after 40 meters and coasted in, finishing one-tenth of a second ahead of the EC 100-meter runnerup.

Dillard also captured the 100-meter dash a half stride ahead of Ewell, both timed in 10.4. Lilly placed third, Umeamaka fourth and Morris fifth. Craig Dixon turned on the heat in the 200-meter event in barely beating Ewell to the tape in 21 seconds flat. Lilly, Umeamaka and Morris finished third, fourth and fifth again.

Dillard recorded a fast time of 14.1 in the 110-meter high hurdles, although slowing down at the tape. Craig Dixon was close behind in second, with EUCOM's Bob Harris, Dick Holy and John Gorksgow taking third, fourth and fifth, respectively. Ault sped through the 400-meter low hurdles in 53.7, far ahead of Holy and Harris.

Sam Felton hurled the hammer 171 feet 3 inches, Gordien placed the discus 165 feet 8 inches and Steve Seymour threw the javelin 203 feet 11 inches before straining a muscle in his back. McGrew cleared 6 feet 2 inches in the high jump, after EUCOM's Thomas Cole bowed out at 5 feet 7 inches.

The 10-man squad will depart tomorrow for Malmoe, Sweden.