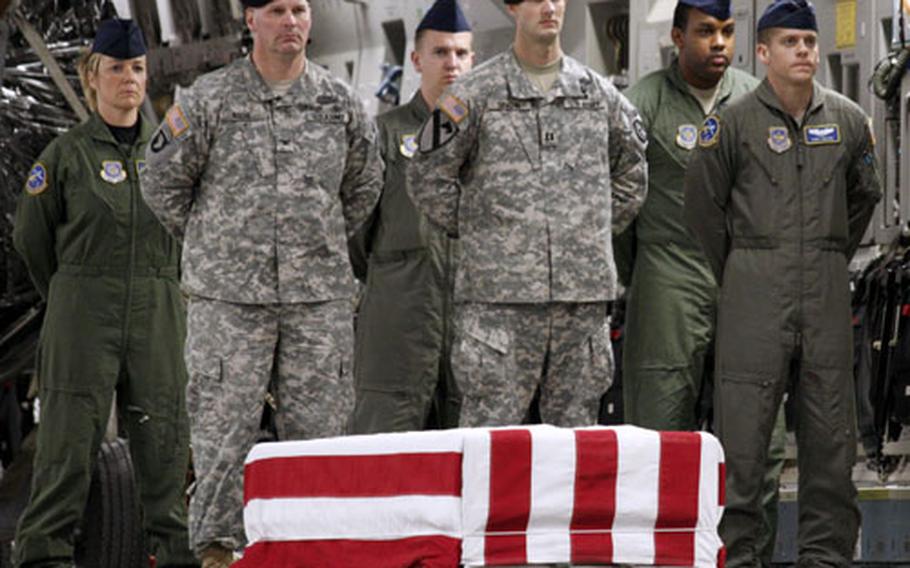 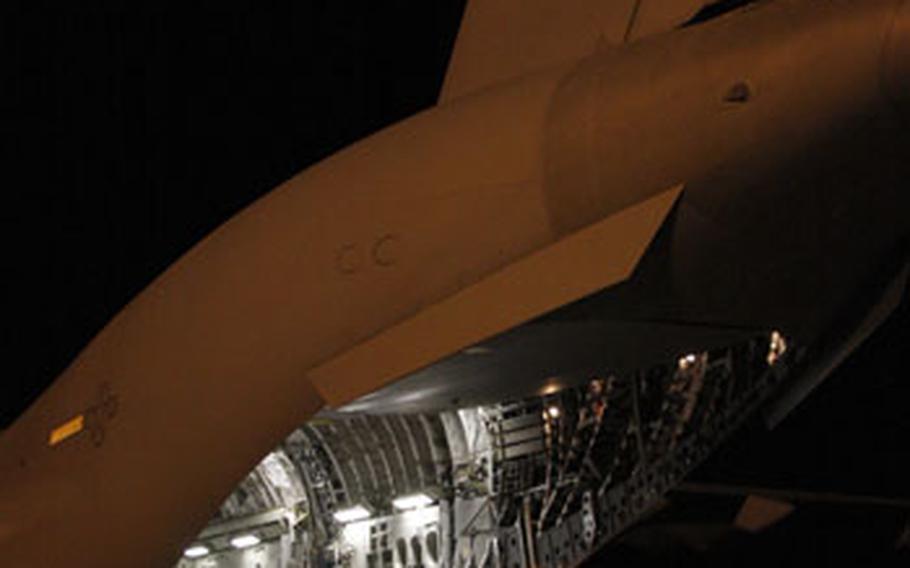 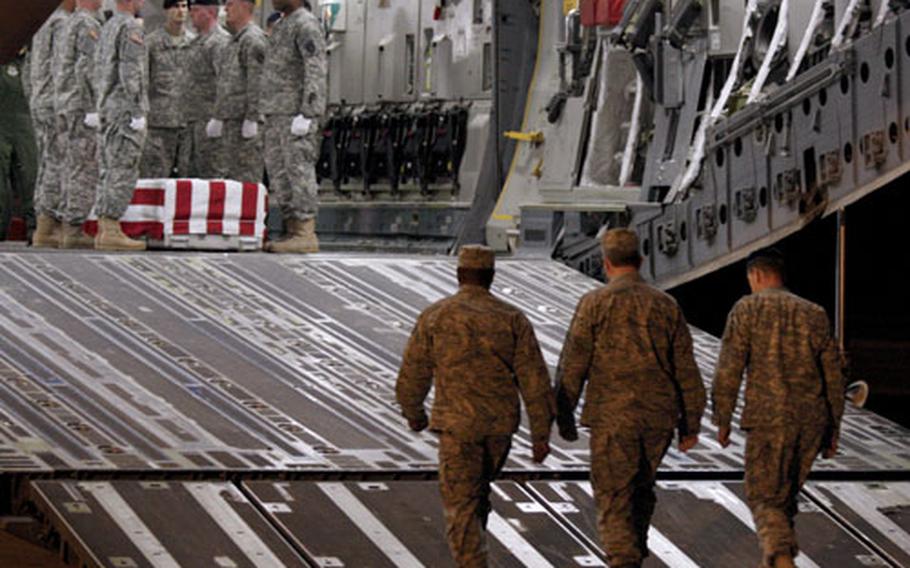 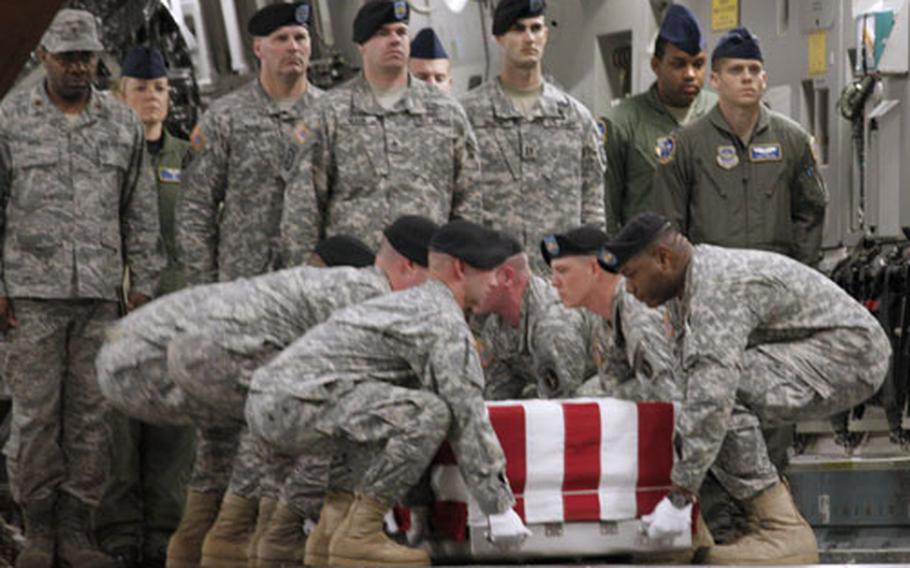 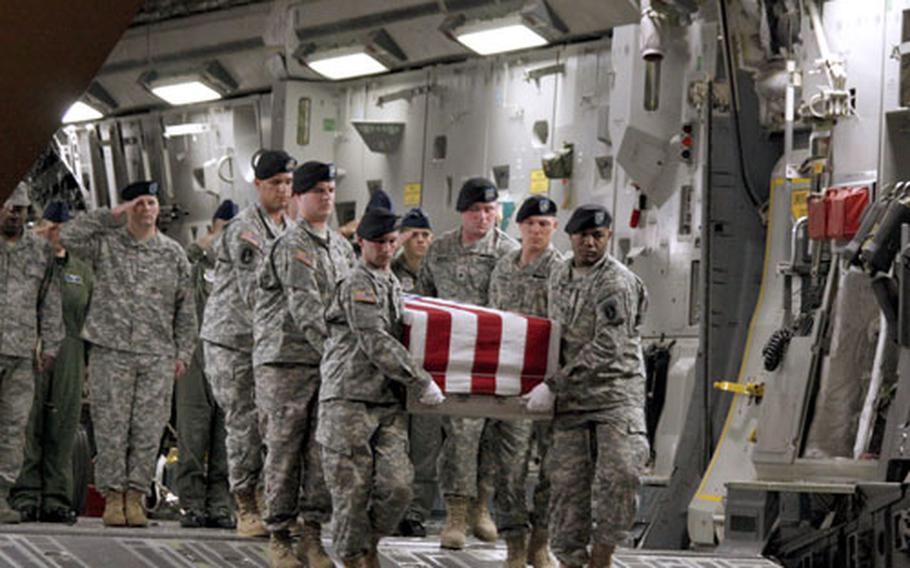 DOVER AIR FORCE BASE, Delaware &#8212; When Spc. Israel Candelaria Mejias&#8217; body arrived here Tuesday night, a carry team saluted the flag-draped case and moved it onto a nearby truck for transport. The whole procedure took just a few minutes.

It&#8217;s the same for every arrival, officials from the Air Force Mortuary Affairs Center said. No changes have been made since the event has been opened to the media. No extra ceremony or service is performed if family members are present, as they were Tuesday. No distinction is made if the deceased was killed in a firefight or a tragic accident away from the battlefield.

Center officials say their mission is a simple, direct service: &#8220;A solemn, dignified transfer to honor those who have given their lives in service of our country.&#8221;

Mejias, a 28-year-old killed Sunday by a mine during a firefight in Baghdad, is only the second casualty whose return was open to the press. In February, Defense Secretary Robert Gates lifted the 1991 ban on media covering the return of servicemembers&#8217; remains, allowing families to decide if they want coverage.

Mejias&#8217; family did not meet with reporters Tuesday but did ask for photographers and local news stations to be allowed to film his return. His wife flew separately to Delaware from Germany for the brief transfer; his family from Puerto Rico has not yet told Army officials where he&#8217;ll be buried.

The soldier was assigned to 1st Battalion, 2nd Infantry Regiment in Task Force 3rd Battalion, 66th Armor Regiment, 172nd Infantry Brigade Combat Team out of Grafenw&#246;hr, Germany. He was the 4,263rd U.S. servicemember killed in Iraq since the start of military operations there six years ago.

Aside from a quiet prayer by a chaplain and a few &#8220;present, arms&#8221; orders from the transfer team leader, no words were spoken as Mejias body was moved off the C-17. Letters of condolence from the service and a formal honor guard come later.

Base officials won&#8217;t even call the transfer a ceremony, saying that may create an expectation or sense of obligation from grieving families. The Pentagon now does provide plane fare for three family members to witness the ceremony if they so choose, but officials said most still don&#8217;t attend the brief event.

Mejias was not the only servicemember to be returned home Tuesday night. Center officials said the remains of another servicemember was the flight from Germany, but his family asked for no media coverage. Apart from the lack of photographers, they said, his transfer was identical to Mejias&#8217;.

Dover officials received word of another transfer request later this week. They have not yet announced whether family or media will be present.