Digging for remains, burying the past 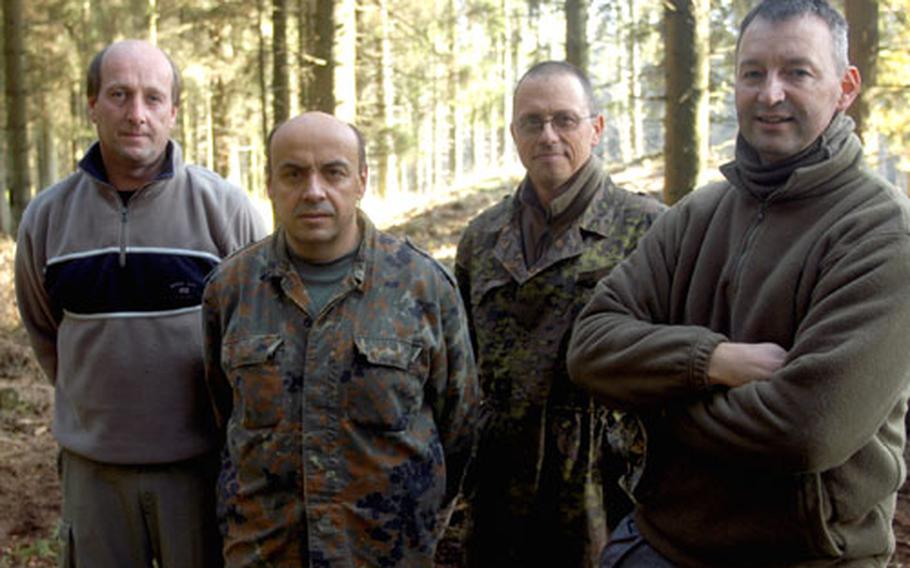 Some people refer to this band of Belgians as “The Diggers” for its dogged determination to recover the remains of U.S. infantrymen who remain missing from the Battle of the Bulge. Pictured from left to right are: Jean-Luc Menestrey, Marc Marique, Jean-Philippe Speder and Jean-Louis Seel. (Kevin Dougherty / S&S)

Some people refer to this band of Belgians as “The Diggers” for its dogged determination to recover the remains of U.S. infantrymen who remain missing from the Battle of the Bulge. Pictured from left to right are: Jean-Luc Menestrey, Marc Marique, Jean-Philippe Speder and Jean-Louis Seel. (Kevin Dougherty / S&S) 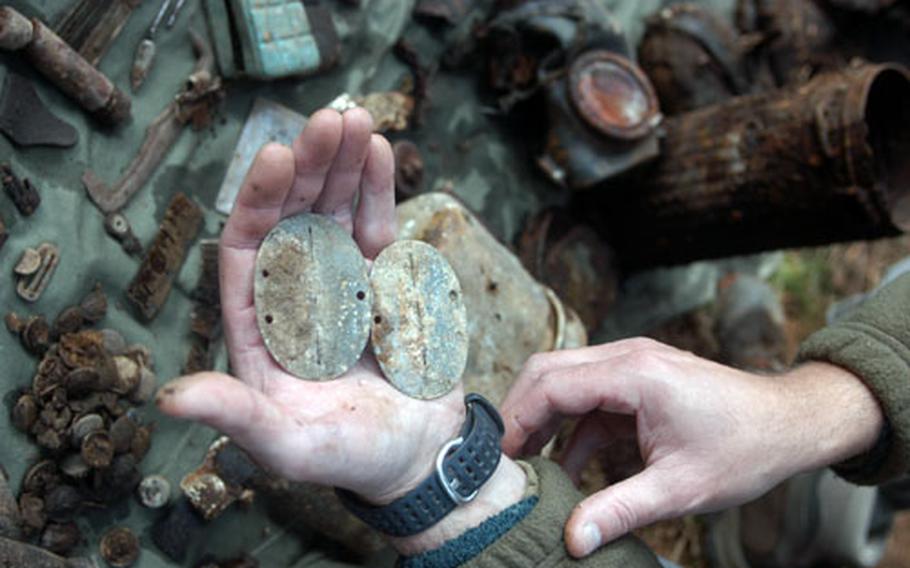 Two sets of “dog tags” belonging to a pair of German soldiers from World War II were unearthed earlier this month along the German-Belgian border. Along with the tags, four Belgian men found other personal effects as well as the soldiers’ remains. The Belgian men, known by some people as “The Diggers,” have spent more than 20 years scouring the woods and hills of southeastern Belgium looking, primarily, for the remains of U.S. soldiers. To date, they have found the remains of 12 Americans and six Germans. (Kevin Dougherty / S&S) 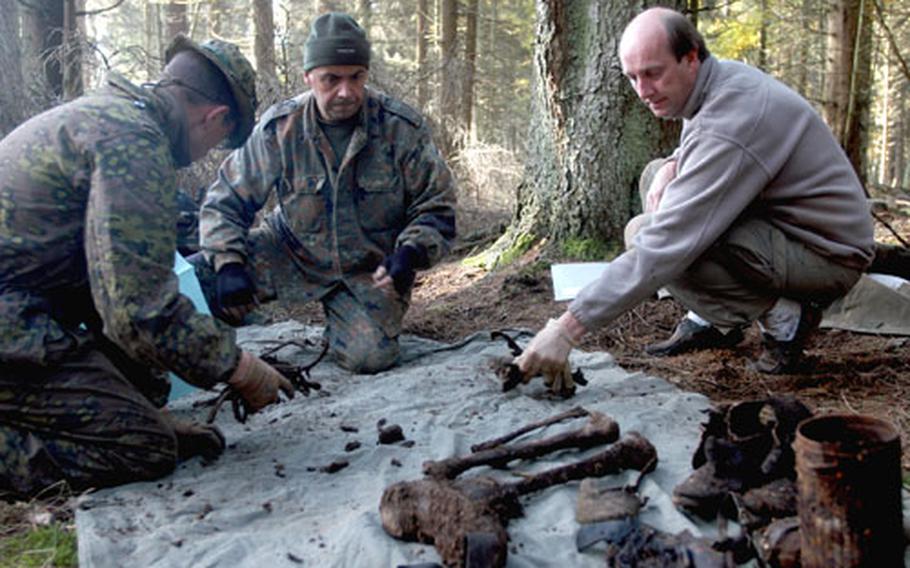 The remains of two German soldiers from World War II were discovered earlier this month in eastern Belgium near the German border. Four Belgian men found the bones and other personal effects, such as toothpaste, a shaving kit, comb, canteen, gas mask and ammunition. Known as “The Diggers,” the group has spent more than 20 years looking for the remains of U.S. soldiers from WW II. Sometimes German troops are located. To date, they have found the remains of 12 Americans and six Germans. Sifting through the bones and personal effects of the two German soldiers are, from left to right, Jean-Philippe Speder, Marc Marique and Jean-Luc Menestrey. (Kevin Dougherty / S&S) 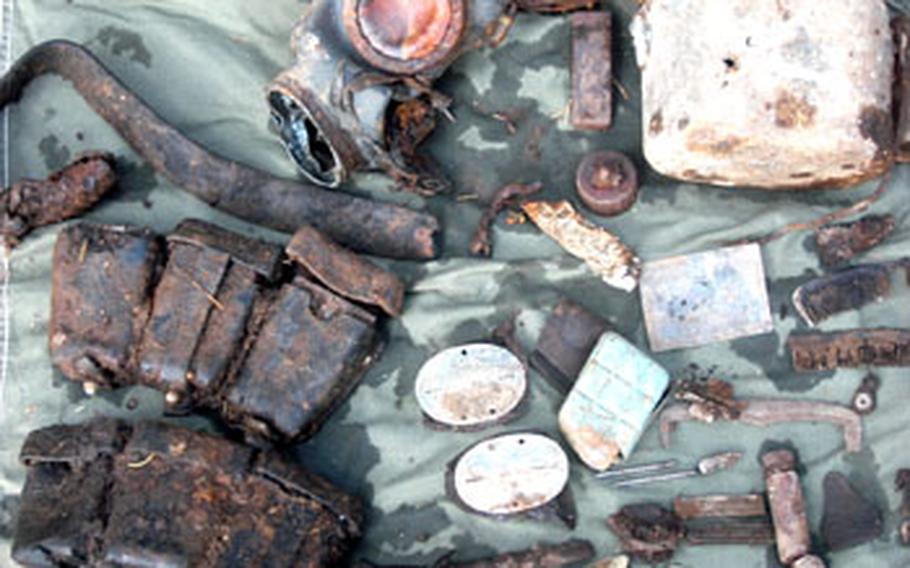 More than six decades after the Battle of the Bulge, some of the remnants of that epic struggle can still be found in the Ardennes Forest in southeastern Belgium near the German border. The remains of two German soldiers were recently found by four Belgian men who regularly search for the bodies of missing U.S. infantrymen. The Belgian group has found the remains of 12 Americans and six Germans over the last 20 years. This was the group’s first find in five years. In addition to human bones, the group unearthed a cache of personal and soldierly effects, from spoons and combs to a gas mask and ammunition. (Kevin Dougherty / S&S) 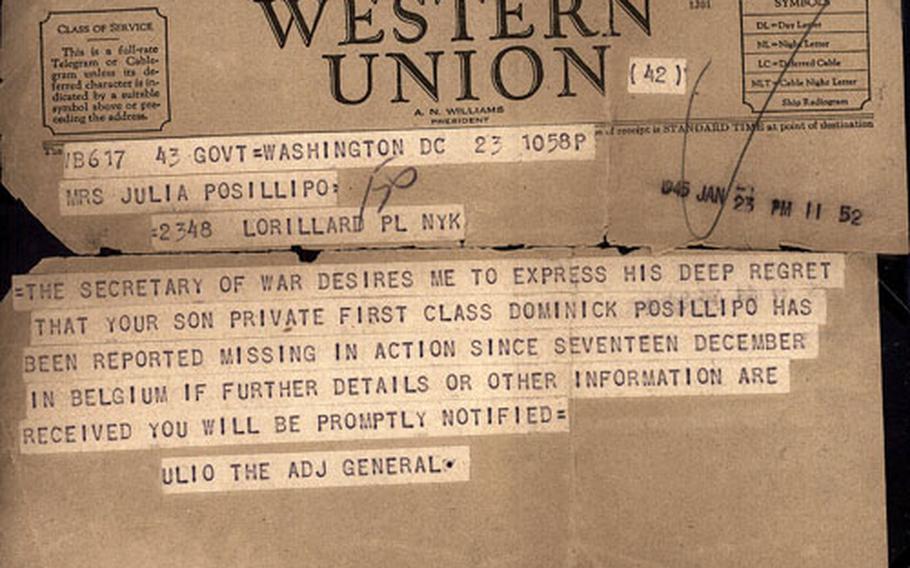 The telegrams that reached the front stoops of many homes during World War II rarely conveyed good news to anxious families. In this January 1945 telegram, the family of Pfc. Dominick Posillipo learned that the previous month he had been reported missing in action in Belgium. His remains were never recovered, though for the past several years his grand nephew, John Lozito of New Rochelle, N.Y., has been working with a Belgian group to find them. (Kevin Dougherty / S&S)

ELSENBORN, Belgium 0151 The human remains were found in a shallow grave by some old foxholes near an unpaved logging road that cuts deep into a coniferous forest north of this border town in eastern Belgium.

No, this is a place of tranquility, a place where souls rarely tread, save for woodland critters, and, on this day, Jean-Philippe Speder and three associates. Veterans of World War II have taken to calling them "The Diggers" for their work to locate the remains of U.S. soldiers missing from the Battle of the Bulge.

"There was a lot of heavy fighting here," Speder said one recent morning as he traipsed along a rutted track that grew fainter by the step. "This is one of the highest points around, so U.S. and German soldiers fought to capture and hold it."

Moments later, Speder veers off the crude path, weaving his way between and around trees and branches. With each step, leaves crinkle and twigs snap. About 100 yards in, his Belgian colleagues come into view. So does a long light blue tarp topped with bones and soldierly artifacts.

This is the group&#8217;s first find in five years. The last set of remains was that of Pvt. Odell Sharpe of the 99th Infantry Division. He was found several miles away near the town of Rocherath. Since 1984, The Diggers have unearthed the remains of 12 Americans and four Germans, not including the latest discovery.

On this day, Speder and his colleagues believe they have recovered the remains of two people, based on the number and type of bones. The evidence also indicates the remains are German, due to the gear and cloth fragments.

While the search team typically looks for Americans, Jean-Luc Menestrey said they treat the remains of German soldiers with respect whenever they find some.

"It&#8217;s the end of a very sad story," Menestrey said in French as Speder translated. "We know that somewhere two families will be affected."

Americans tend to associate servicemembers missing in action with the more than 1,750 cases from the Vietnam War. That isn&#8217;t surprising, given that the war is recent history and that the agency in charge of recovering the remains of the missing, the Joint POW-MIA Accounting Command (JPAC) in Hawaii, traces its lineage to the early 1970s and Vietnam.

But compared to Vietnam, the number of missing from World War II is off the charts. According to JPAC, the number of Americans missing from that war is at least 78,000. About 35,000 are categorized as "recoverable." Those not included are servicemembers lost at sea or on the receiving end of a direct artillery hit.

Bill Warnock is a military historian who has assisted The Diggers for several years, providing them with documents and leads that aid the search effort. The former U.S. airman said he knows of no reliable figure for the number of MIAs from the Battle of the Bulge. At a minimum, available data suggests that scores of U.S. soldiers were felled in the Ardennes Forest and never brought home.

"There is a significant number of MIAs from World War II," said Matt McCloskey, a mortuary affairs officer for the U.S. Army Memorial Affairs Activity-Europe in Landstuhl, Germany. An organized group, such as The Diggers, "is actually a huge asset in terms of identifying and recovering remains."

Annually, the U.S. spends more than $100 million a year on POW/MIA matters, much of it in Southeast Asia, based on Defense Department figures. Despite the sum, JPAC won&#8217;t send recovery teams to Europe &#8212; or, for that matter, anywhere in the world &#8212; without solid leads.

When a site is confirmed, the mortuary affairs office in Landstuhl is contacted and it coordinates with JPAC to ultimately bring the remains to Hawaii for further examination and tests.

This is where Speder and his team enter the equation. The group, which also includes Menestrey, Marc Marique and Jean-Louis Seel, typically searches for remains a few times a month, depending on the season and personal schedules.

"The material we found is very common," Seel said as he stood surveying the items on the blue tarp near the German foxhole.

Encrusted with soil and other earthly deposits, the objects ranged from a shaving brush and hair comb to a gas mask and rounds of ammunition.

There also was a partially filled tube of toothpaste, two metal spoons and a canteen with the name "Schulz" scrawled on one side.

And then there are the sets of bones, absent the skulls and other skeletal remains.

"The big pieces are gone," Seel said. "Now when we search the battlefield, we target small things, like dog tags."

Seel and Speder began this type of work when they were teenagers. Thirty years ago, Speder said, a person could walk into a forested area and see all sorts of war litter. It was on one of these souvenir hunts that the two came across the skeletal remains of a German soldier, fully clothed, with a gunshot wound to the forehead.

(There are an estimated 1 million German soldiers listed as missing in action from World War II, according to a spokesman for the German Ministry of Defense.)

"We never expected to find any remains," Speder said as he sat in his dining room weeks before the team&#8217;s latest find. "When we found our first American, it was a turning point."

The chance discovery caught Warnock&#8217;s attention when he read about it back in the United States. Working with members of the 99th ID Association, he compiled a file on a second American.

Two days after the Belgians received the file, they located the remains of 2nd Lt. Lonnie O. Holloway Jr. of Corpus Christi, Texas.

"There were skeptics among some of the veterans," Warnock said of the 99th. "They didn&#8217;t think we would find anything."

Over the next 11 years, the team, with Menestrey and Marique in the fold, went on to discover the remains of 10 more Americans. But since 2003, many leads have dried up. Warnock, the team&#8217;s principal researcher, figures there are about eight to 10 cases left where there is a decent probability of success.

One of the cases involves Pfc. Dominick Posillipo.

When his unit retreated during the early days of the German counteroffensive, Posillipo&#8217;s body was left behind and never recovered, his nephew, John Lozito, said. A month later, the Posillipo family received a telegram from the War Department stating he was missing in action.

A subsequent telegram said he died in Denmark, though unit buddies say he died near Steinbruck, Belgium, on the northern flank, where the 99th was situated.

Lozito continues to research the incident. While JPAC officials have visited the general area, Lozito is also in contact with The Diggers.

"They are my family&#8217;s last hope," Lozito said of the Belgian search team. "They are the only hope for my uncle to come home."

Why they do it

The Diggers bring shovels, metal detectors and several other tools.

Equally important is the documentation they use, which includes medical manuals that help them identify bones or determine the approximate height of an individual.

They also use their intuition.

Each said they have been searching for so many years now that they can feel when they think they are closing in on some remains, or a piece of the overall puzzle.

"Sometimes I think I see shadows," Speder said. "In a sense, they are still here."

Seel, who found the remains of the two German soldiers, said members of the group often work alone or in pairs.

Work and family demands have cut into their free time, though all still manage to contribute somehow to the cause.

Marique is the current workhorse. He looks every weekend, while Seel and Speder get out every other week. Menestrey isn&#8217;t as available anymore.

When you ask them why they do it, why they devote hours and hours of their time to locating Americans they never knew, Americans who died well before they were born, the Belgians, as well as Warnock, mainly say they consider it an honor.

"You know you have done something very good when you meet the family," Seel said.

Speder considers it a payback.

"They liberated my parents and grandparents," the 45-year-old said. The soldiers "are kind of my family."