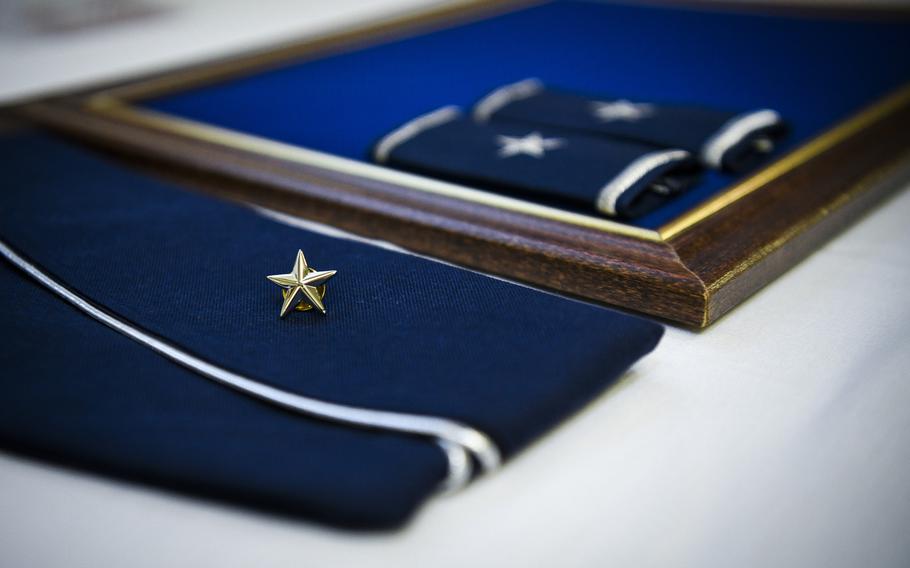 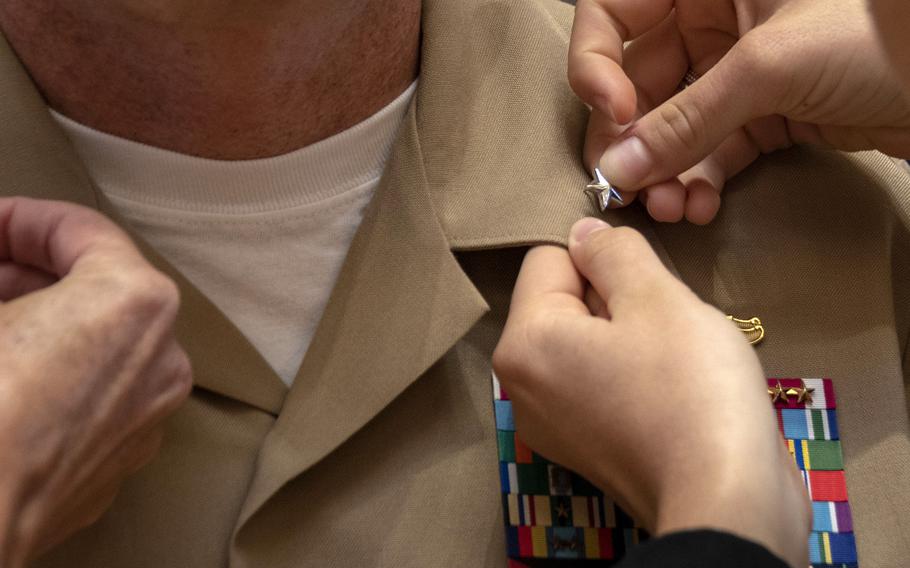 A rear admiral gets his star pinned to his uniform in 2019. A recent Rand Corp. study said the armed services trains and promotes its flag officers in different ways. (William Sykes/U.S. Navy)

Marines tend to value discipline over risk-tasking for their one-star candidates, the Navy prizes technical expertise, and relations with peers hold greater sway in the Army, a Defense Department-commissioned report found.

General and flag officers in each service all had some things in common — stellar evaluations, successful command tours, and similar backgrounds and experiences, the Rand Corp. study titled “Raise the Flag” found.

But each of the armed services trains and promotes its top officers differently by rewarding different qualities, the study released Monday said.

In the Army, where generals tend to come from infantry and armor branches, the career path tends to be “tactically focused, command-centric, doctrine based, and, especially for O-7 promotion decisions, influenced by an officer’s reputation among Army senior leaders.”

That encourages promotion of an officer that will be “an excellent planner of military operations but might not be highly adaptable and creative, particularly when facing challenges for which doctrine does not exist,” the study said.

They also might be less likely to share innovative or controversial ideas to avoid poor performance evaluations, the report found.

Its archetypical general might “equate effective leadership with understanding how to also be a good, disciplined follower — of rules, and of other leaders,” “value discipline over risk-taking,” and “be averse to questioning assumptions underlying existing processes, strategies, and orders.”

As a result, its flag officers are often “less risk-averse in operational decisions” than in other services, without being careless — though that may be “more true” of archetypes with surface warfare and undersea backgrounds, the study said.

The Air Force identifies talent early and emphasizes early promotions. It also puts more importance on education and joint experience than other services, the study said.

The archetype is a pilot and most frequently a fighter pilot, the Rand report found.

They might be less comfortable with “outside-the-box” ideas and in leadership positions “that require decisions without the benefit of clear order and procedure.” They’re also more likely to rely less on hierarchy in planning and operations, Rand said.

The study was designed to help the Pentagon assess whether military leadership should change to serve national security objectives better.

It was based on interviews with military officers and subject-matter experts, analysis of available officer biographies and personnel data from the Defense Manpower Data Center, among other factors.

The study did not make recommendations on changes, but it concluded that any adjustments could take “a generation or more” to take effect, in part because of the decades it normally takes to move up to flag and general level.

“Institutional traditions and cultures of each service are strong and entrenched, and therefore will evolve slowly,” it said.