Different styles, but only one way down 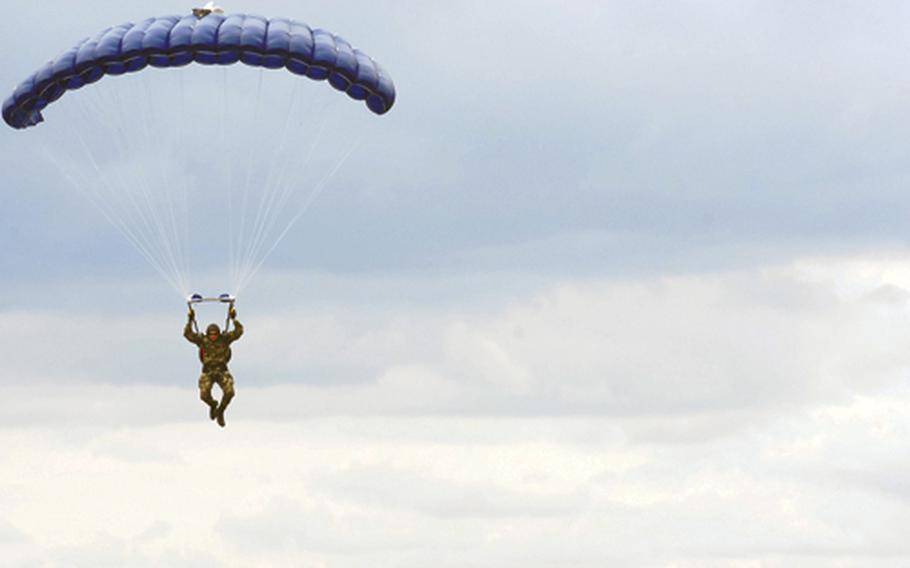 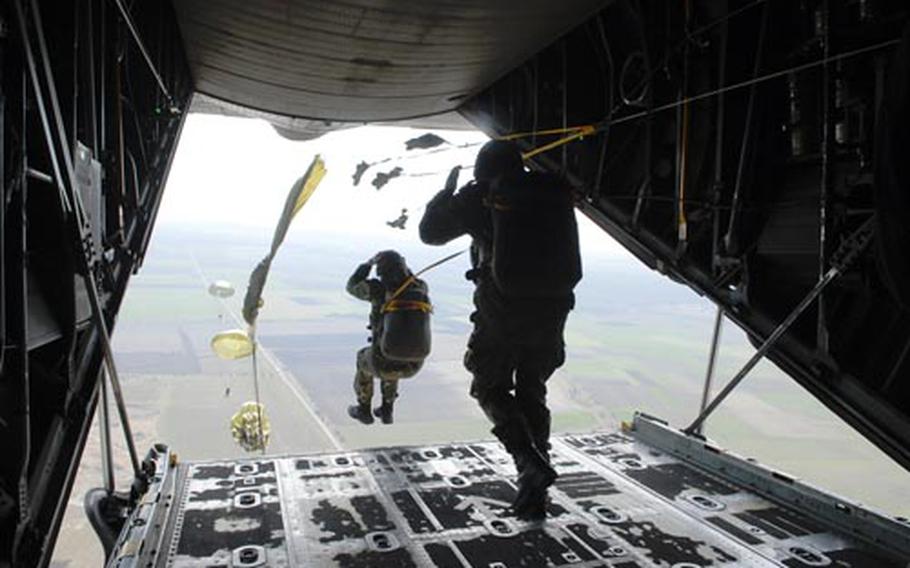 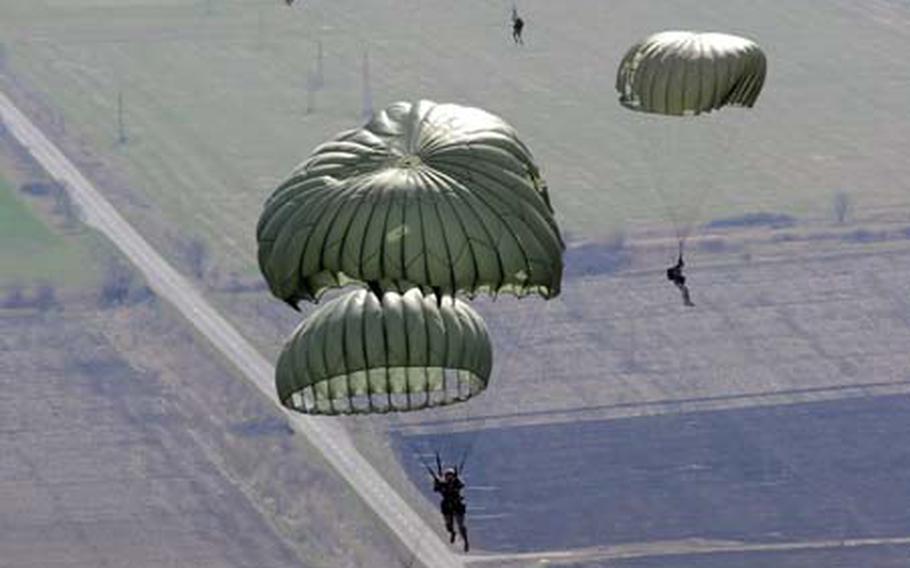 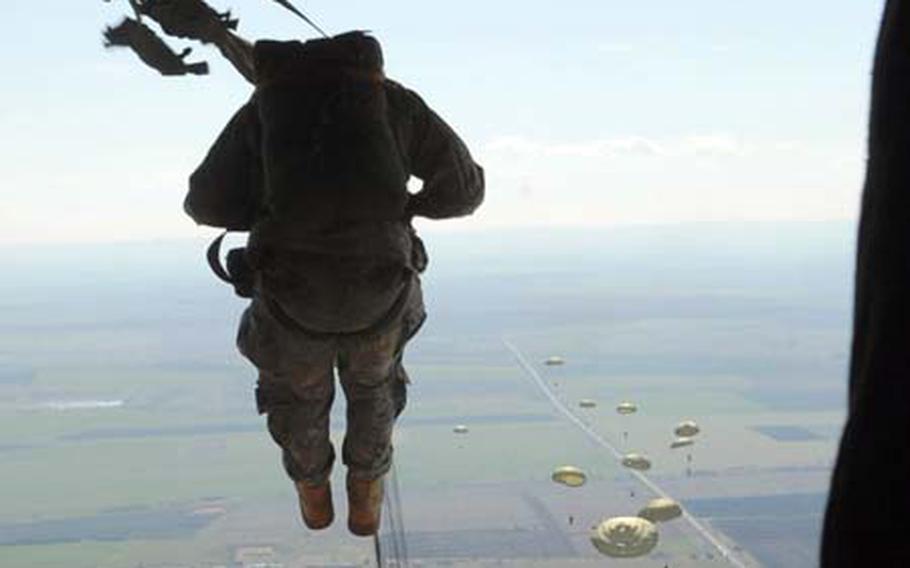 A U.S. paratrooper jumps from a C-130E aircraft with arms tightly in front of his body and feet together and forward during a static-line jump with Bulgarian paratroopers. (Jennifer H. Svan / S&S)

BEZMER AIR BASE, Bulgaria &#8212; The differences started on the ground.

The 10 U.S. military paratroops preparing to jump from the sky in less than an hour stood around and shot the breeze. The mood was light until it was time to strap their parachute packs on.

On the other hand, the 45 Bulgarian special forces&#8217; paratroops who were jumping with the Americans had their packs lined in straight rows, and they stood in formation, listening to instructions from their commander before it was time to walk to the C-130E Hercules that would lift them 1,500 feet into the Bulgarian blue sky.

Rusinov made the comment as Lt. Col. Petko Petkov, commander of Bulgaria&#8217;s 68th Special Forces Brigade in Plovdiv, explained that the Bulgarian and American paratroops have similar techniques.

But factor in nerves, experience and training, and the result was altogether different.

The U.S. troops locked their arms in front of their bodies &#8212; so their hands could reach their reserve chute if needed &#8212; and jumped with boots and legs pressed tight together. Some were so relaxed prior to jumping from the aircraft&#8217;s rear ramp that they slept on the plane.

Many of the Bulgarians, meanwhile, reached for their helmets as they leaped with legs spread. Some hesitated before taking the plunge.

The difference in style and jitters didn&#8217;t go unnoticed.

"Their exits are not the way ours are," said Staff Sgt. Daniel Spivey, 28, a certified Air Force paratrooper and a ground radio communications technician with the 786th Security Forces Squadron at Sembach Air Base, Germany. "They definitely don&#8217;t have a tight body position when they leave the aircraft. Some were a little nervous. I don&#8217;t think they jump ramps very often."

He was right. Bulgarian paratroops said they typically jump from an aircraft&#8217;s side crew door, so leaving from the wide open rear ramp of a C-130 was something new.

The experience was invaluable, Petkov said. "To know how to use these planes, in the future, if we have to, we can jump together somewhere in the world," he said.

The tables were possibly to be turned. The Americans were considering whether to jump with their counterparts out of a Bulgarian two-engine L410 &#8212; using Bulgarian-rigged parachutes.

He had little reason to worry: So far during the two-week exercise, despite any differences, all chutes had opened and Bulgarians and Americans safely landed in a farmer&#8217;s field designated as the drop zone.

"Sure, yeah, every time you jump, you think about" whether the chute will deploy, said Petty Officer 1st Class James Endicott, a sailor with Explosive Ordnance Disposal Mobile Unit 8 in Sigonella, Sicily.

On a static-line jump, "we do a 4,000 (1,000, 2000, etc.) count," said Senior Master Sgt. John Veasey, a logistics superintendent for the 786th Security Forces Squadron, part of the 86th Contingency Response Group at Ramstein Air Base, Germany. "If you don&#8217;t feel your opening shock, your main parachute deploy, you immediately open your reserve parachute."

It happened once, early in Endicott&#8217;s 13 years of skydiving, but due to a lack of experience and not a chute malfunction, he said. He was able to open his reserve chute.

Endicott was the only American during Thracian Spring to perform a high-altitude, low-opening &#8212; or HALO &#8212; jump from about 7,000 feet with 10 Bulgarians. Last out of the plane, he was the first to touch the ground. Unlike static-line jumps where the chute opens as soon as the paratrooper leaps from the plane, HALO jumpers free fall as fast as 120 mph before releasing their chute.

Most of the U.S. paratroops at the exercise said they had yet to jump for a real-world mission. But if the time comes, it would likely be under the cover of nightfall, Veasey said.

Those can be dangerous, said Endicott.

And so last Wednesday, well after dark, a C-130E from the 37th Airlift Squadron at Ramstein flew 56 U.S. and Bulgarian paratroops over the sparsely lit towns and villages of southeast Bulgaria. And, once again, the Bulgarians reached for their helmets and seemed to walk off the back of the plane, while the Americans jumped with locked arms and tight legs.

But as the canopies opened, their green mushroom tops lit by the moon, it was impossible to tell the two countries&#8217; paratroops apart. The challenge now for all was to get safely to the ground.