Difference should be 'night and day' for Mildenhall firefighters 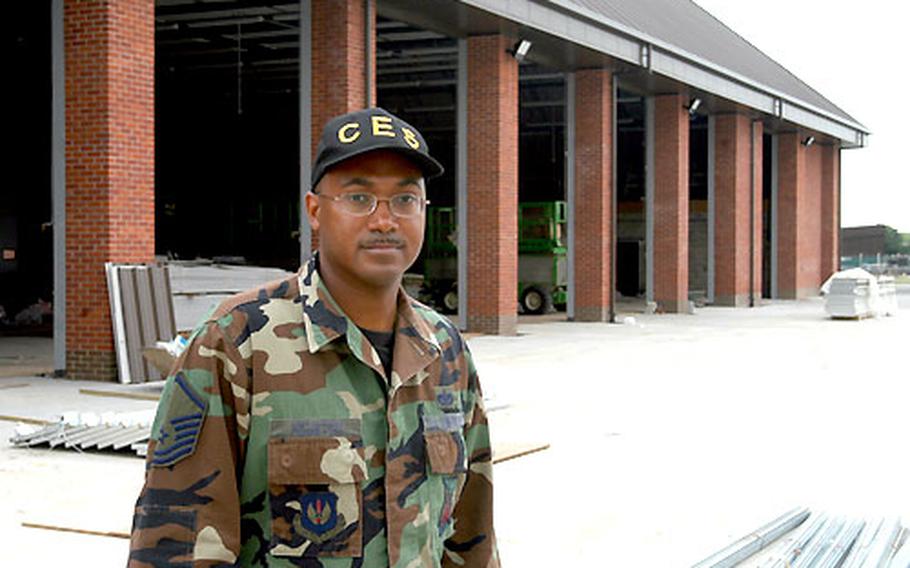 Master Sgt. Reco Houston, an assistant fire chief at RAF Mildenhall, England, stands before the new fire station under construction at the base. The quality of life will improve greatly when the firefighters move from a facility that dates to the 1950s, Houston said. (Ron Jensen / S&S)

RAF MILDENHALL, England &#8212; To say base firefighters are looking forward to their new fire station the same way young children anticipate the arrival of Christmas may be a stretch.

But not much of one.

The facility that has been growing a few hundred yards from the current fire station will make a &#8220;night and day&#8221; difference in the lives of Air Force and Ministry of Defence, or MOD, firefighters when it opens next February or March.

The biggest improvement will be in quality of life, said Master Sgt. Reco Houston, an assistant fire chief with the 100th Civil Engineer Squadron.

The new building will allow firefighters, who are on duty for 24 hours and off duty for the next 24 hours, to sleep in their own rooms rather than having a roommate sleeping two feet away.

They will have separate rooms for cooking and dining and for watching television and more storage area for professional gear and personal items. The new gym will have twice as much room as the current one.

The station is home to 91 firefighters, including 52 Air Force members and 39 from the MOD.

The building, which has been under construction for most of this year, will replace a facility that has seen addition after addition for decades.

Some bays for the firetrucks are at right angles to each other, making it difficult, and even dangerous, for the trucks to roar off to answer a call. Amacker said some of the vehicles have to be parked outside, exposing them to the harsh English weather.

Painter said the current building was built for smaller trucks. Thus, the doors are too narrow and the bays are too short for modern vehicles. The new bays will not only be big enough for all of the vehicles, they will each be equipped with air and water lines, ending the current need to maneuver the large trucks to a nearby hydrant or air hose.

Amacker also said the current communication room is &#8220;like a cave,&#8221; with no windows. The new one will have three walls of windows, giving the workers a broad view of the flight line.

The location, too, is an improvement. To reach the current one requires crossing part of the flight line, which inhibits family members from visiting during work shifts.

Houston said the new facility, too, might help ease a retention problem in the service&#8217;s firefighting field.