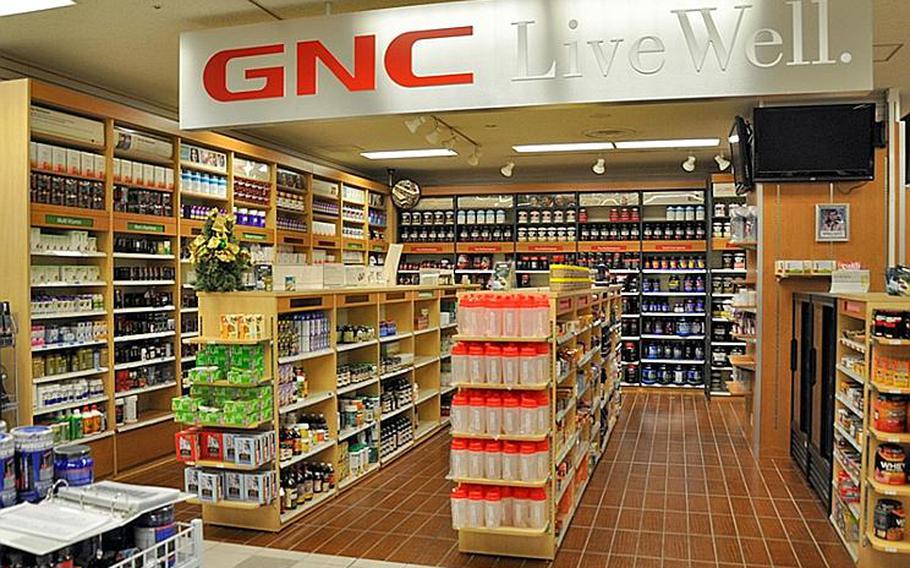 GNC sells a variety of nutritional products at military outlets around the world such as this store at Yokosuka Naval Base in Japan. Military stores operated by the Army and Air Force Exchange Service and the Navy Exchange have pulled products containing DMAA from the shelves after the Army launched an investigation into whether the dietary supplement was responsible for the deaths of two soldiers. (Trevor Andersen/Stars and Stripe)

CAMP FOSTER, Okinawa - Revelations that the weight-loss and bodybuilding supplement DMAA might be linked to two soldier deaths and serious health problems in others have spurred a class-action lawsuit against one manufacturer in California, according to district court documents.

The suit was filed on behalf of California consumers following a report on the soldier deaths by Stars and Stripes and it claims Dallas-based USPlabs sold fitness supplements containing the amphetamine-like substance even though they are dangerous and ineffective.

Supplements containing DMAA are still widely available to the public, but last month the military pulled at least 18 of the popular fitness products from store shelves around the world, and the Army launched an ongoing safety review after mounting evidence of health problems and two deadly heart attacks among soldiers training at an unnamed Army base in the southwest.

"The deaths and injuries to the young men in the armed services were a catapult behind this case," Scott J. Ferrell, attorney for the plaintiffs, wrote in an email response to Stars and Stripes.

The USPlabs marketing about the safety of its supplements Jack3d and OxyElite Pro is "false and misleading," according to the complaint filed by Ferrell in California district court Dec. 19. As evidence, the lawsuit cites a Department of Defense statement published just days earlier in Stars and Stripes saying that DMAA might be linked to death, organ damage, seizures, loss of consciousness, heat injury and muscle breakdown among servicemembers.

USPlabs could not be immediately reached for comment but has told Stars and Stripes its products were shown to be safe through testing.

Ferrell said he expects the case to go to trial sometime next year.

Tens of thousands of Californians have spent over $5 million in recent years on Jack3d and OxyElite Pro, which sell individually for about $45 to $55, according to the suit.

They are among the most popular products in a burgeoning industry of DMAA supplements. Retailer GNC said it has sold about 430 million units of products containing DMAA since 2007, including those made by USPlabs.

DMAA, which was developed as a nasal decongestant in the 1940s and then forgotten for decades, has already been banned as a performance-enhancing drug by Major League Baseball and the World Anti-Doping Agency, the body responsible for policing drug use in international sports.