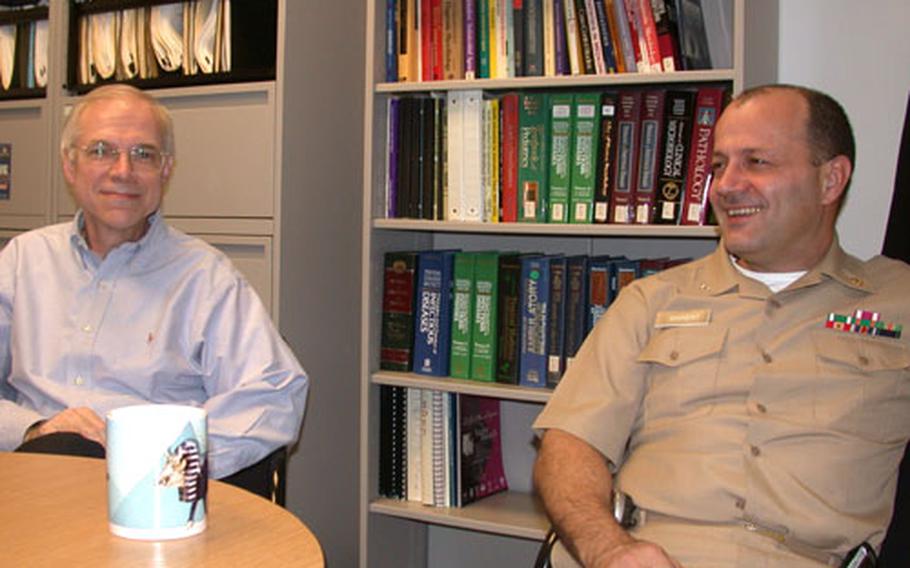 Dr. Larry Hale, department chief of the enteric infections at Walter Reed&#39;s Army Institute of Research, and Capt. Stephen Savarino, leader of the enterotoxigenic E. coli bacteria studies at the Naval Medical Research Center, a combined facility in Silver Spring, Md., talk about three types of vaccines that military doctors and scientists are working on to combat diarrhea for warfighters. ()

SILVER SPRING, Md. &#8212; Diarrhea rarely is fatal for deployed U.S. warfighters, but it can be debilitating, and military medical specialists are working to solve the problem.

At the jointly-operated Walter Reed Army Institute of Research and Naval Medical Research Facility, researchers are in the human trial phase of testing for vaccines that could stop episodes of diarrhea for three bacterial pathogens that often put a stop to deployed troops&#8217; activities &#8212; even if only temporarily.

Military doctors and scientists are about five years away from putting an end to the problem.

While rarely are the exposures fatal, for a week to 10 days, depending on the bacteria, servicemembers suffer and sometimes are put out of commission, medical experts said.

During Operations Desert Shield and Desert Storm, about 57 percent of troops suffered from diarrhea, with 20 percent reporting they were temporarily incapacitated, according to the 1998 Army Science and Technology Master Plan, cited in a recent Army story.

The three bacteria that commonly hinder warfighters are Enterotoxigenic Escherichia coli bacteria, commonly called E. coli bacteria, Shigella, and Campylobacter, the last of which is found even in the United States in chicken. Adequately cooking the chicken ensures it is killed, but it can affect people who don&#8217;t clean up the raw juices.

The key to treating diarrhea is to avoid dehydration. Rarely do deployed troops carry adequate oral rehydration solutions, and instead troops combat the problem by drinking lots of water and eating saltine crackers to replenish the body, said Dr. David Scott, a Navy captain, who is head of the enteric disease department for the Naval Medical Research Center.

But avoiding it altogether is the goal.

Vaccines take years to develop and must go through rigorous testing phases that include laboratory trials, tests on animals and finally, tests on humans. Before any human trial can begin, the research agency, including the military, must get approval from the Food and Drug Administration, which tracks the drug&#8217;s progress.

Though the types of vaccines are as different as the bacteria, their mission is to make troops immune to their effects, no matter what serotype.

&#8220;A serotype is like having the bacteria wear different coats. What the body sees and reacts to is that coat,&#8221; said Dr. (Capt.) Stephen Saravino, team leader of the enterotoxigenic E. coli bacteria studies at the NMRC.

Deployed troops typically are exposed to bacteria in developing countries because the organisms thrive in unsanitary conditions and are transmitted via drinking water, by eating the foreign foods or bathing in contaminated waters.

While the three vaccines still are in trial phases, they most likely will be oral vaccines, given in either liquid or pill form.

The developing vaccines are being tested both in volunteers in the United States, and in children of developing countries, such as Egypt and Bangladesh.

The reason tests are run on children is because their bodies have not developed immunities to the bacteria, which happens after repeated exposures, said Dr. Thomas Hale, chief of the enteric infections department at Walter Reed&#8217;s Army Institute of Research.

They also are the generation who needs the vaccines the most, since the effects of diarrhea can be fatal in children, Scott said.

While military scientists develop the vaccines, eventually the licensing will be sold to a private company that will take on the responsibility of developing and marketing the product, Scott said.