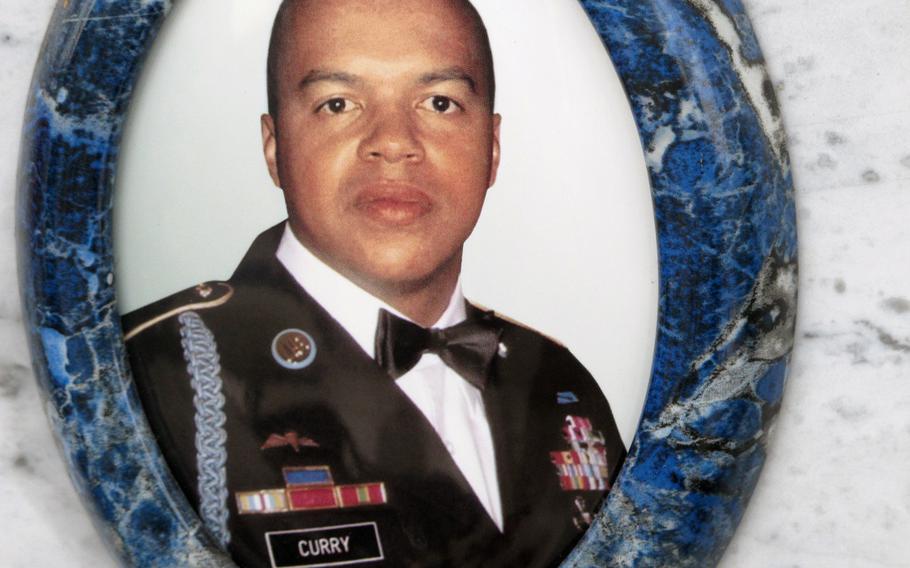 Buy Photo
First Sgt. Michael Curry was killed in Afghanistan and was buried in Italy, where he'd made his home and life. His photograph appears on his cemetery site in Grantorto, Italy. The dining facility on Caserma Ederle is soon to be renamed the Curry Dining Facility ( Nancy Montgomery/Stars and Stripes)

Buy Photo
First Sgt. Michael Curry was killed in Afghanistan and was buried in Italy, where he'd made his home and life. His photograph appears on his cemetery site in Grantorto, Italy. The dining facility on Caserma Ederle is soon to be renamed the Curry Dining Facility ( Nancy Montgomery/Stars and Stripes) VICENZA, Italy — First Sgt. Michael Curry loved all things Italian — the food, the cycling, the little towns, the loud family arguments at Sunday lunch — and the woman he married. When he had to, Curry, along with his Venetian wife, Lucia, rotated to Fort Lewis, Wash., or Fort Benning, Ga. But the Fort Lauderdale, Fla., native always got back to Vicenza.

At the same time, Curry cared deeply about soldiers whose lives and welfare were entrusted to him. Now, for the second time in four years, Curry is being locally memorialized, this time by having the dining facility on Caserma Ederle named for him.

Curry was on his second deployment to Afghanistan, as part of Delta Company, 1st Battalion, 503rd Regiment, 173rd Airborne Brigade, when on July 23, 2007, he was killed by a roadside bomb while doing route clearance near Kabul.

His widow buried him in the Grantorto cemetery near the home where they reared two sons and had planned to retire. He was 37 and had been in the Army 20 years.

Curry had considered not deploying with the rest of the battalion. But he couldn’t do that.

“He was feeling really responsible for the soldiers, and he wanted to go,” Lucia said.

Curry, who gave his younger sisters an allowance from the money he earned at a Winn-Dixie market when he was a kid, never changed.

He was always doing something for the soldiers under his care, Lucia said. He’d help them fix their TV cable or their cars, invite them for holiday meals and counsel them about their personal problems.

“I remember him going to the gym every day to help soldiers with weight problems. I’d say, ‘They’re adults; they can look after themselves. You have a family, ’ ” she said.

First sergeant is considered among the most prestigious and rewarding jobs in the Army. Because it comes with huge responsibilities for soldiers’ welfare, some regard the job as a sacred trust.

“Now I understand him,” said Lucia, who works at the base dental clinic. “It’s a little late, but I got it.”

So she’s “very, very happy” that the dining facility is being renamed in her late husband’s honor.

Called the South of the Alps for as long as anyone can remember, the cafeteria will be renamed the Curry Dining Facility in a few weeks, just a few months shy of the 10th anniversary of Curry’s death. The South of the Alps signs will come down, the building will be repainted and a bronze plaque lauding Curry will be placed near the facility’s entrance, said Maj. Juan Martinez, a 173rd Brigade spokesman. “It’s another way of honoring our fallen leaders,” Martinez said.

The idea came as Lt. Col. Mike Wagner, 1st Battalion commander, and Command Sgt. Maj. Charles Burrow discussed how to memorialize soldiers killed in combat. Forward operating bases, combat outposts and the like named for the fallen in far-away combat theaters were ephemeral, they noted, as fleeting as the lives lost or the U.S. troop presence.

The Ederle dining facility offered something more lasting. Thousands of soldiers, including those who had deployed where he had, would see the plaque day after day and learn about Curry or be reminded of him.

“I really can’t think of a better way to honor his service and sacrifice,” Wagner said.

Naming a dining facility for Curry is particularly meaningful, Wagner said, because of his position as first sergeant. “They make sure the soldiers get chow, and they eat last,” he said.

For Wagner, it’s not an abstract tribute. Curry was his first platoon sergeant. “I couldn’t have asked for a more talented, professional leader as I started my career,” he said. Curry shared his soldiers’ hardships, he said, and lightened their burdens with optimism and humor.

“He was always smiling,” Lucia agreed. “It was hard to fight with him.”

She said that when they met, Curry had planned only a brief Army enlistment to travel and study. “And then at some point, he realized that he’d started loving his job. I guess he really fell in love with the soldiers.”

Both the Currys’ sons — Taylor, 22, and Kevin, 18 — live in the United States. Taylor, a Columbia University graduate, likes living in New York City. Kevin is a student at the University of Pennsylvania.

The dining facility is not the first memorial to Curry. In 2013, a stone monument inscribed with his name and that of Italian Carabinieri Denis Frison, who died in 2006, was set down in the Grantorto piazza in an elaborate ceremony at the behest of Frison’s father. The monument is thought to be the only one in Italy and possibly all of Europe dedicated to a U.S. soldier killed in Afghanistan.

Curry’s widow said her husband’s name should not be the only one on the plaque at the dining facility because he wouldn’t want that.

“He didn’t die by himself,” she said.