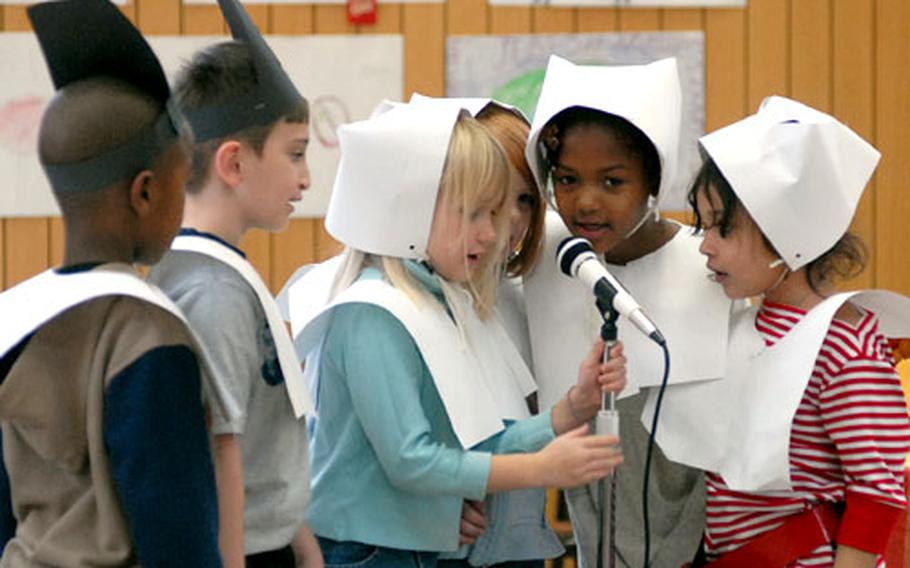 First-grade Pilgrims say their lines during the third- and fourth-grade classes&#39; performance at the Dexheim Elementary School&#39;s Thanksgiving celebration Wednesday in Dexheim, Germany. From left to right are Daniel Wright, Robert Gochenour, Alexis Paprzycki, Annika Hogland, Iam Hammock and Stephania Suarez. It is the final Thanksgiving for the school, which is scheduled to close at the end of the school year. (Michael Abrams / S&S) 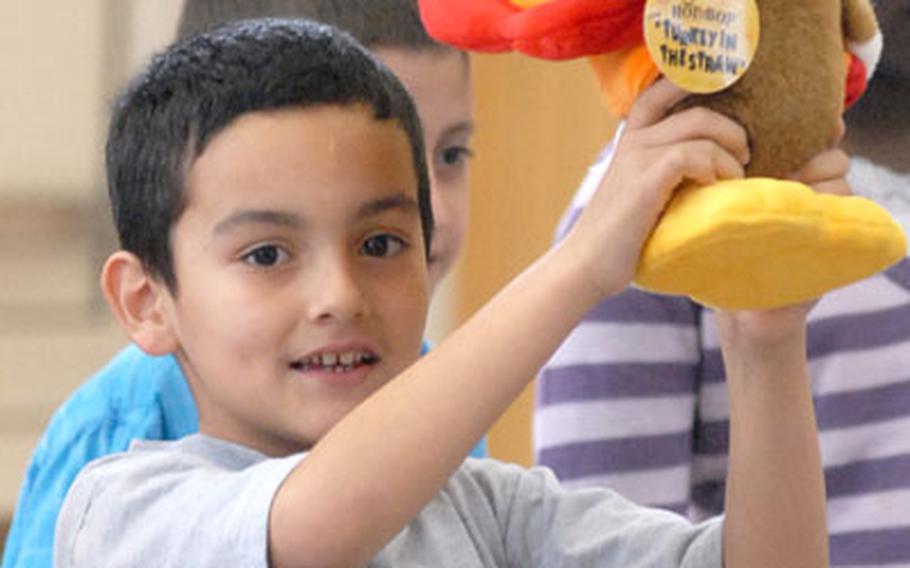 Christofer Ramos, 8, a third-grader at Dexheim Elementary School in Germany, holds up a "stuffed" turkey as he and his third- and fourth-grade schoolmates sing a Thanksgiving song. At the end of the song, the turkey is to survive because it will be a vegetarian Thanksgiving. (Michael Abrams / S&S) DEXHEIM, Germany &#8212; Some students warbled like turkeys, while others donned paper pilgrim hats or fussed with their feathered headdress.

Thanksgiving school events, such as the pair of Wednesday afternoon skits at Dexheim Elementary School, have changed little over the years. The simplicity is enduring and the kids are cute: most perform as practiced and proud parents applaud often.

Dexheim, located near Wiesbaden and the Rhine River, is a U.S. military community in transition. The school is slated to close next year, but Anderson Barracks &#8212; at least for the time being &#8212; is sticking around.

None of that mattered Wednesday when 90 children and scores of parents gathered in the Dragon&#8217;s gym to talk turkey, as in Pilgrims and Indians.

And so it went for 10 minutes, culminating in a recount of the first Thanksgiving a year later. The feast lasted three days.

The third- and fourth-graders followed with a short skit called &#8220;Thanks for Thanksgiving&#8221; and a couple of songs.