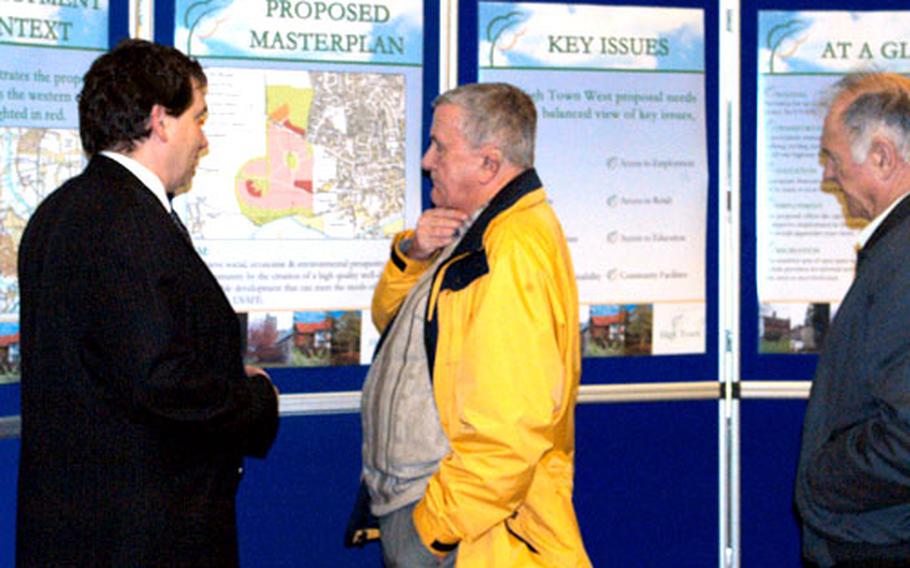 John Zeal listens as Ashwell Group representative Carl Atkinson describes the housing development plan. Widespread opposition to the plan has emerged from hundreds of people who live in and around the community. (Bryan Mitchell / S&S)

Representatives of the Ashwell Group were to meet with the public Friday and Saturday at the Jubilee Centre to discuss the project and involve as many people as possible in the consultation process.

The plans were fairly simple. They basically laid out where the houses would be built and what area would be allocated for green space and affordable British housing.

He said the Ashwell Group will accept public input through the end of January. The developers plan to assess the information gathered before presenting their proposals for building permits to the Forest Heath District Council, which is the local governing body.

The current plan calls for 440 homes to be built specifically for the Air Force with an additional 160 affordable homes for British residents.

The Ashwell Group was contracted by the Air Force through a competitive-bidding process following a housing analysis that determined a shortfall of about 600 units in the area around RAFs Mildenhall, Lakenheath and Feltwell.

Early attendance at the forum indicated the public would not be reticent in providing input.

Much of the talk echoed complaints heard at Tuesday&#8217;s organizational meeting of Save Western Mildenhall. One of the more outspoken critics at that session showed up early Friday but did not want to be identified by Stars and Stripes, citing his fear of becoming a CIA target.

Others were more open with their concerns.

Patrick Hall has been living in Mildenhall for 34 years and said he has never seen the town galvanized in the way it has to oppose the development plan.

Still, like many on hand Tuesday and Friday, Hall left room for compromise.

Others, however, feared their concerns would mean little against the momentum of a prominent local developer and the world&#8217;s largest military.

Ralph Wright and his wife, Francis, moved to Mildenhall about five years ago to be within driving distance of shops and services. They plan to provide input, but wonder aloud how much impact it would have.

Anyone wishing to provide input on the plan can e-mail the Ashwell Group at: hightownwestfeeback@ashwellproperty.co.uk.