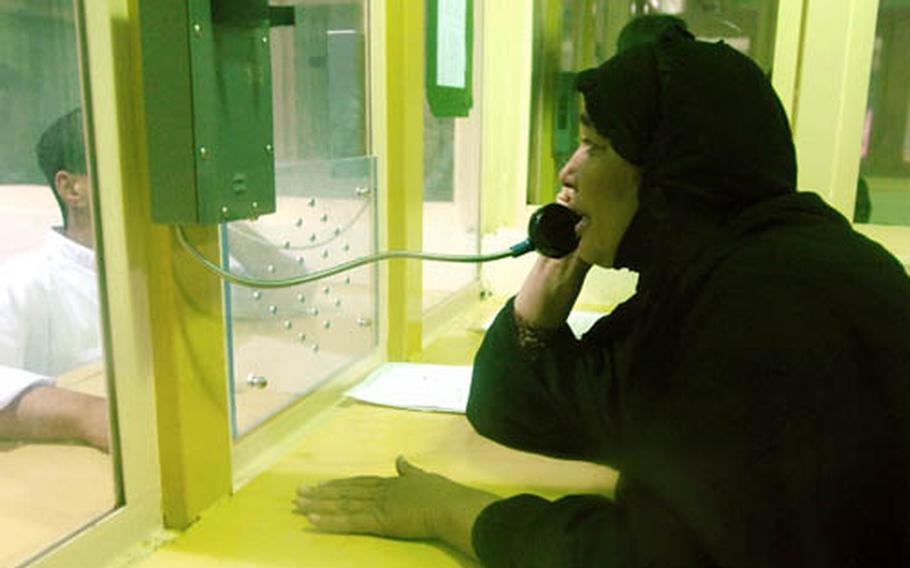 BAGHDAD, Iraq -- A mother talks with her detained son during family visitation at Camp Cropper, a Coalition forces Theater Internment Facility (TIF) in western Baghdad. Detainees and their families are allowed visitation for one hour once a week. (By Spc. Michael V. May / US Army)

BAGHDAD - The young Iraqi boy&#8217;s drawings are taped proudly to the trailer wall.

Then: A blank face looming in a hole smashed through a brick wall. A boy gripping the bars of a cage labeled "seg box," his back to the viewer.

The drawings are signed "Bicaso," a bastardized spelling of the artistic nickname American soldiers have given him. They are also signed with the boy&#8217;s detainee identification number. He is one of some 380 youths between 11 and 17 held by U.S. troops in Iraq.

The drawings symbolize the struggles of a detention system seeking to erase the stain of Abu Ghraib. While trying to reform with educational, arts, vocational and religious programs, the U.S. detention system in Iraq still faces questions about due process, juvenile detainees and human rights.

But, American officials say, the system is now run using the same counterinsurgency tactics used in the war outside these walls.

A lingering imageIt is doubtful that any reform can replace the images burned into the public consciousness by the Abu Ghraib scandal in 2004. Photographs of U.S. soldiers beating, threatening and sexually humiliating detainees became a rallying cry and recruiting tool for insurgents both in Iraq and throughout the Middle East.

And, though the U.S. military handed the prison back to the Iraqis in 2006, the name is still synonymous with the detention system in Iraq.

"The first picture everyone has is of Abu Ghraib. But it&#8217;s not the same," says Lt. Col. Rod Faulk, chief of staff of the 300th Military Police Brigade, which runs the detention facilities.

"The misconception is that all we are is jailers," he says. "But we are focused on the recognition that it&#8217;s not just holding a guy off the battlefield. It&#8217;s a strategic part of counterinsurgency."

Faulk served at Camp Bucca in 2005 and 2006, when there was only one U.S. battalion &#8212; around 600 soldiers &#8212; charged with guarding more than 11,000 detainees. Violence among the detainees was common. The detention facilities in Iraq seemingly only taught insurgents how to become more capable insurgents.

The goal is to have fewer than 15,000 detainees by the end of this year; between January and September of this year, some 12,000 have been released. About a dozen women are being held. And only around 200 detainees are from outside of Iraq &#8212; "foreign fighters," in the military terminology.

The post-Abu Ghraib reforms began with training. There is a heavy emphasis on "strategic engagement" with detainees. The Geneva Conventions are taught, re-taught, then drilled in even more.

Housing has improved. Detainees elect "chiefs," who bring grievances or requests to the guards; they also determine who sleeps where and mete out their own discipline.

A works program has been instituted. Detainees craft everything from ping-pong tables and furniture, to the very bricks used in reconstruction programs throughout Iraq. Religious discussion programs are offered.

But officials chafe at terms like "punishment." They react even more strongly to the word "prisoner" instead of detainee. Their reasoning highlights one of the continuing criticisms of the system: prisoner, they say, means a person has been found guilty of a crime in a court. The detainees in this system are held until the U.S. military, not an Iraqi court, decides their fate.

Still, the painful lessons of the past guide their treatment.

"The bedrock of this is erasing Abu Ghraib," says Faulk. "In the Army, when we learn a lesson the hard way, we continue to beat it in."

The youngest detaineesFirst Lt. Michael Calcagni is with the 1st Battalion, 103rd Field Artillery Regiment, of the Rhode Island National Guard. Before coming to Iraq, he and his unit spent a few weeks at Fort Dix, N.J., learning how to run a school for juvenile detainees.

"It&#8217;s far from what we thought we&#8217;d be doing," he says. But as he leads a visitor through Dar al-Hikmah, the juvenile detention center at Camp Cropper in Baghdad, it is evident he and the other soldiers have taken to their task.

Calcagni runs through the educational programs offered, citing literacy rates and curriculum assessments as if he were a school administrator in Anytown, U.S.A.

Eighty percent of the juveniles attend school six days a week, Calcagni says. The worst of the detainees &#8212; the "irreconcilables" &#8212; are not given the option of attending the classes.

"It&#8217;s truly a fine line we walk," said Bill Gresslin, a contractor who runs the educational program for the juveniles. "This is a detention facility, but this is an educational facility as well."

Akil, a jovial, lightly bearded Iraqi man who once worked for the Marines as an interpreter, helps run the juvenile programs. He is intimately familiar with Camp Cropper &#8212; he was held by the U.S. military for two years on charges of corruption.

"It took me a little time to clear that up," he says, with a slight smile.

Akil is now one of the key Iraqi staffers running the juvenile programs, which range from civics to religion.

"The religion discussion program was tough the first few weeks," Akil acknowledges. "The extremists among the juveniles would not accept it. We had to correct that."

Juveniles, unlike adults, can only be held in the system for 365 days. But all of the youths work toward one goal: the "Happy Bus." On the day of their release, they are put on the bus, given new pants and a dress shirt, and sent home.

Inside one of the tents, a session with a Sunni cleric is under way. The scene is familiar to anyone who has been in a middle school classroom: some 15 boys sitting at desks, in various states of interest. A pair sleep with their heads buried in their arms, crossed atop the tables. A few shoot glares at the visitors. One or two engage the cleric, who implores the group to "clear your heart from hate and jealousy."

"How do we show our hearts to the people?" one boy asks.

"Through good works. Through reading the Quran," comes the reply.

The juveniles wear purple uniforms, the adults yellow. While they currently live with the adult detainee population, efforts are under way to completely segregate the populations.

Outside, another group of boys is finishing up a soccer game, despite the scorching 100-plus degree heat of a June midmorning. They sit in the dust, drinking water and recounting the action.

Shoes are piled into a large garbage bin; they will be washed, disinfected and used by another group of boys. The guards are hoping that, through donations, they&#8217;ll soon have enough pairs of soccer shoes for each juvenile detainee.

Five minutesAt different times during a recent tour of Cropper, several American officers bluntly offer the same admission: "I know there are innocent people in here."

That admission cuts deepest during a visitation session.

Detainees are allowed one hour with their families each week, assuming their families can find out which facility they&#8217;re held in and can travel there.

At Camp Cropper, the families &#8212; most often, women covered head to toe in black, with small children in tow &#8212; wait for the detainees to be brought to "The Pad," a concrete slab. There are two long, yellow lines painted down either side of the pad. Twelve detainees line up on one side, flanked by soldiers in sunglasses. Families assemble on the other. At a signal from the guards, the families rush over to the detainees.

Some embrace in a flurry of hugs and kisses, children climbing into arms. Others are more subdued &#8212; a hand on a cheek, or a head bowed in tears.

For exactly five minutes, they are allowed physical contact.

Then, a guard calls out "Time!" The groups slowly disengage, the soldiers step in between, and the families retreat to their yellow line. The entire assemblage is then led into a long, low concrete building. There, for an hour, the detainees and the families sit separated by thick glass, talking through the kind of prison phone seen in the movies. Next to each phone is a list of attorneys the families can call.

Another Mandela?The average detainee is held for 333 days, officials say. Some 5 percent have been held for more than three years.

Since the U.S. reforms, the recidivism rate of released detainees has fallen to 0.5 percent, Army officials said. Previously, it was around 5 or 6 percent.

"Is it just because of these programs? Maybe they&#8217;re just getting tired of the insurgency," Faulk said. "But the common denominator is these programs."

Faulk and others involved in the detention system often cite examples ranging from former German prisoners of war to Nelson Mandela. It is their way of reminding themselves, and their soldiers, of the possible outcomes.

"History has shown that leaders often rise from the most difficult of times and circumstances, and we should not be surprised if Iraq&#8217;s future leaders are today being held in a coalition force custody," Marine Lt. Gen. Douglas M. Stone, who oversaw the detention system in Iraq until this June, said.

"We should make no mistake: the manner in which they are treated may very well determine if they are radical or progressive, violent or benevolent."

Red Cross keeps eye on facilitiesDorothea Krimitsas, a spokeswoman with the International Committee of the Red Cross, says that while security concerns have kept ICRC delegates from visiting all detention facilities in Iraq, they have "regularly" carried out visits to Camp Bucca, Camp Cropper, the Divisional Internment Facility in Basra and Fort Suse in northern Iraq, which was run by the British but handed over to the Iraqis.

Through March 2008, Krimitsas says, ICRC delegates have spoken with more than 23,500 detainees being held by coalition troops.

But, officials have not visited many of the smaller facilities where detainees are kept immediately after their capture. Critics have said these facilities are now the most likely places where abuses would occur &#8212; based on the assumption that soldiers who actually detain people who might have harmed their comrades, for instance, are more likely to react emotionally or violently.

Whatever its thoughts on the detention reforms, the ICRC will not say.

"The ICRC does not comment publicly on its findings and observations. It discusses them through its dialogue with the detaining authorities," Krimitsas says.

Critics, like the group Human Rights Watch, say the U.S. system detains too many people, for too long, without formal charges. Somewhat paradoxically, the groups also criticize the U.S. military for handing over some detainees to the Iraqis &#8212; where prison conditions are far worse and the legal system is still suspect, at best.

94 percentDecrease in use of "non-lethal & lethal munitions" by guards

2Number of detainees heldby British forces in Iraq,as of April 2008