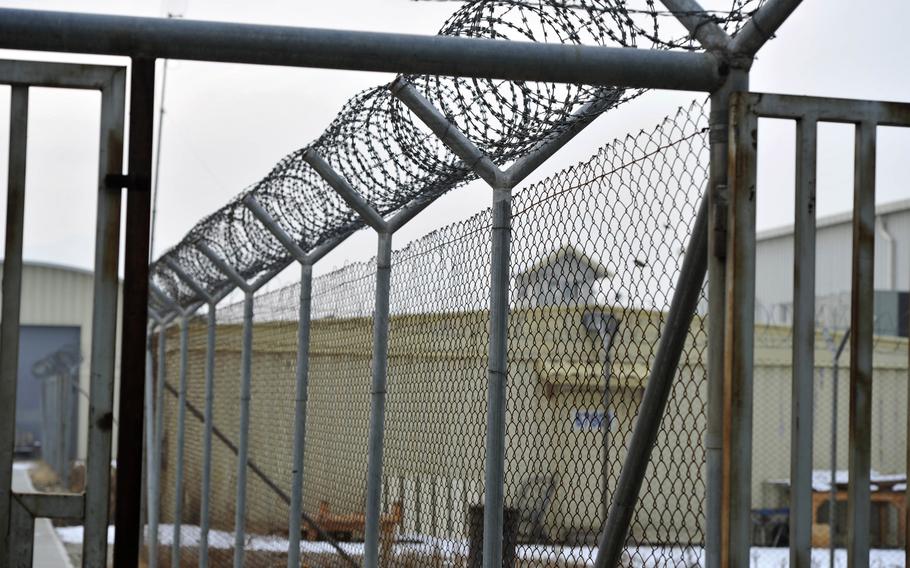 The United Nations in a report released Wednesday, April 17, 2019, expressed concern over conditions for detainees at the Afghan National Detention Facility in Parwan province. The facility, pictured here in 2017, is managed by the Afghan Defense Ministry. ()

KABUL, Afghanistan — Reports of Afghan security forces torturing war prisoners have declined over the past two years but continue to take place at a “disturbingly high” level, a human rights organization said.

Nearly a third of conflict-related detainees interviewed in Afghan prisons gave “credible and reliable” accounts of being tortured or subjected to other forms of inhumane or degrading treatment over the past two calendar years, the U.N. Assistance Mission in Afghanistan said in a report released Wednesday.

“I had to kneel, and they put a device between my legs,” a detainee in Kabul told U.N. interviewers at a facility run by the National Directorate of Security, or NDS, Afghanistan’s main intelligence agency. “Some persons were holding my shoulders, then that device gave me electric shocks. After that, my feet stopped working for some time. I was also hanged on my feet from the ceiling.”

The percentage of detainees reporting torture was down from the 40% documented in a previous UNAMA survey, which covered 2015 through 2016.

“UNAMA welcomes this reduction in the prevalence of torture,” the most recent report said, highlighting government initiatives, including its agreement last year to the U.N.’s Optional Protocol to the Convention against Torture.

But the mission added: “While steps taken by the government are encouraging, the overall figures of torture and ill-treatment of conflict-related detainees remain disturbingly high.”

The main techniques prisoners described to interviewers involved beatings — including using a pipe on detainees’ feet — suspension from the ceiling and the use of threats and stress positions. Some methods leave no lasting physical signs or would be hard to verify with forensic examinations, the report said.

As part of the NATO-led mission in the country, U.S. and international forces train and advise Afghan military and police, and the U.S. funds the bulk of the Kabul government’s defense and security budget. NATO’s U.S.-led Resolute Support mission declined to comment on the UNAMA report.

The report notes concern about overcrowding and the wide use of solitary confinement at a previously U.S.-run facility in Parwan province, near Bagram Air Field, which was handed over to the Afghan army in 2012 on condition that it be overseen by a general. Interviewers did not receive any reports of torture or abuse at the Parwan facility, the report said.

Most of the more than 600 detainees U.N. staff interviewed at 77 facilities were held at prisons run by NDS, which is advised by U.S. troops, government officials and contractors.

Overall, reports of torture at NDS facilities fell from 29% two years ago to 19% in 2018, according to the report.

Torture and other forms of ill-treatment were also documented at detention facilities run by the country’s military and police forces.

“They choked me a bit and then they started pouring water into my mouth,” a detainee at a jail run by police in southern Kandahar province told UNAMA. “That lasted for about 10-15 minutes. The commander said, ‘if you do not confess, we will repeat.’ So, they repeated this seven times.”

The report shows a marked improvement in 2018, with 27% of war detainees claiming to have suffered torture or ill-treatment last year, compared to nearly 37% the year before.

However, in detention centers run by the national police, there was no sign of a similar year-over-year decline. About 30% of detainees reported suffering such treatment each year, though that was down from 45% in the previous two-year period.

The situation at national police facilities in southern Kandahar province — home to the second-largest international military base in Afghanistan — was of particular concern, with 77% of detainees interviewed providing credible accounts of being subjected to the most brutal forms of torture or abuse, the report said.

Former Kandahar police chief Gen. Abdul Raziq, who was a key figure in the U.S. strategy for securing southern Afghanistan against the Taliban, was for years accused of human rights abuses, including running a secret torture center.

Raziq was killed in October when a bodyguard for the provincial governor opened fire at the end of a security meeting that was attended by Gen. Scott Miller, the top U.S. commander in Afghanistan. A U.S. brigadier general was also wounded in the incident.

Responding to UNAMA’s findings, NDS said there was “no systematic torture and ill-treatment of suspects” in any of its units.

The Afghan Defense Ministry and Interior Ministry, which oversees the country’s police forces, both said they were committed to identifying anyone accused of torture and punishing them.